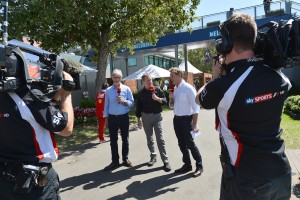 Tata Communications, official connectivity provider of Formula 1, Formula One Management and Sky have tested in action live Ultra High Definition (UHD) broadcasting at the 2016 Formula 1 Singapore Airlines Singapore Grand Prix. Following this first ever end-to-end broadcast of an F1 race in UHD, Sky will show all races of the 2017 season in UHD.

The successful proof of concept involved the installation of multiple state-of-the-art UHD cameras at the Singapore circuit. The footage from these was mixed in the FOM Broadcast Centre onsite, and the UHD output distributed live to Sky’s HQ in Osterley in the UK using Tata Communications’ Video Connect service. Video Connect enables broadcasters to deliver live video feeds over the world’s largest wholly-owned subsea fibre network, ensuring the highest quality experience for viewers.

“This proof of concept with Sky and Tata Communications demonstrates our ongoing commitment to make F1 the ultimate sports experience by harnessing the power of cutting-edge broadcasting technologies,” says John Morrison, CTO of Formula One Management.

“Delivering the race action seamlessly in UHD from any Grand Prix location to homes requires superfast, reliable connectivity on a global scale,” says Mehul Kapadia, Managing Director of F1 Business at Tata Communications. “And, other game-changing technologies like virtual reality will rely on ubiquitous, superfast connectivity too. As the break-neck speed of technology innovation continues, we’ll work with Formula One Management to enable fans to experience the exhilarating world of F1 in new ways.”

“We pride ourselves on being an extremely forward-thinking F1 broadcaster with a special focus on innovation,” says Keith Lane, director of operations at Sky. “UHD offers four times higher resolution than HD, making F1 a more powerful, immersive experience for fans than ever before. The success of this proof of concept in Singapore shows that we’re on track to show every race live in UHD next season using our next-generation Sky Q home entertainment service, and to continue to give our customers the action-packed F1 experiences that they crave.”

The UHD test in Singapore follows a series of other ambitious POCs by Tata Communications and Formula One Management around live OTT content delivery and 4K broadcasting.