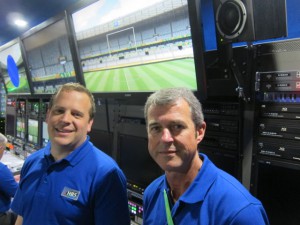 Telegenic’s new 4K OB unit was nothing but a gleam in its eye when the team visited IBC in Amsterdam last September. At NAB a few months prior they had seen Sony’s 4K demonstration and by the time they arrived in Amsterdam the 4K buzz had only grown.

In the days and weeks that followed conversations were had, commitments were made, and the end result was a decision to make a new truck slated to hit the road in May capable of producing events in 4K. The funny thing is, when it was completed it hit the high seas instead of the roads as it was shipped by SOS Global Express to Brazil so it could be used in the Confederations Cup 4K trials.

“Usually you want about a week to do things like balance the air conditioning but we had to do that here [in Belo Horizonte],” says Terry James, Telegenic, director of operations.

“We always look to be at the forefront of innovation and we pushed ourselves forward with 3D and now 4K is another avenue for us,” says James. “We work  closely with Sky and hand in hand with them on where they will go next. So we want to have the tools in place to have that development. We can dip in and out of the 4K market and still have a truck that can do HD.”

The momentum around the project ramped up between September, when the decision was made to build the truck, and February, when FIFA TV and HBS made the decision to do a 4K

“The Sony 4K demo at IBC had moved on quite a bit since the NAB demo,” says Sean Mulhern, Telegenic, head of engineering and development. “The uncertainty was whether Sony could fix a lot of the issues. But since being here we have completed two matches and the first was transmittable and we could have even gotten away with down converting it. It was quite a good test and we only had a few small issues.”

In terms of making an OB unit 4K-capable the most important thing is to have a 3Gbps routing infrastructure (and of course some 4K monitors, cameras, and lenses).

For its part the new Telegenic truck has a 576×1152 Miranda router and three 4K monitors as well as a 65-inch 4K monitor so that the production team can see the final output. Two EVS XT[3] servers and four Sony SR1000 tape decks are also on board and under the control of the Sony 8000 vision mixer.

“You can flip and flop between HD and 4K shows and that would not be a problem,” says Mulhern.

James believes that standard HD cameras with an upconverted output will play a role in early 4K productions similarly to the way 2D cameras still play a part in 3D productions for critical plays and additional angles.

“Right now a 4K production is an add on to an HD production,” he adds. “Clearly the lens technology [for 4K] is better today than we thought it would be but it’s still not [fully] there yet.”

Among the most recent steps that have been taken in lens development is the ability to zoom and focus digital cinema lenses and the ability to get camera shading controls into the 4K cameras.

James admits that going 4K is a gamble for the time being but that it is no similar to the move to HD when Sky was working on HD for 18 months before it launched a channel.

“It’s key that a broadcaster gets on board to give 4K its legs,” he says.

In terms of the difficulty of the production workflow, James says it is somewhere between HD and 3D.

“It also requires a slightly different way of covering it as you shoot slightly wider so there is more visual information and the director does not need to cut as much,” he says.