As the proud winner of an Amazon Echo from Aspen Media at the BVE broadcast event in London in February, Telegenic Deputy Head of Audio Simon Foster also got to demo DirectOut Technologies’ MADI.MONI and whilst Alexa is good for playing radio stations and setting timers, the device is not so good at checking MADI signals.

“Telegenic has a long-lasting relationship with Aspen Media, and has purchased other essential MADI products such as the DirectOut SPLI.CONVERTER and MADI.SRC. We knew the MADI.MONI would also be a well-built essential product,” said Foster.

“The MADI.MONI had its first outing at a major golfing event held in Augusta USA. With multiple 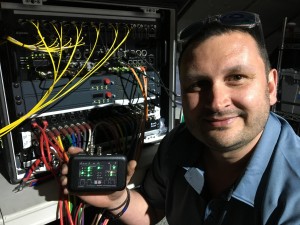 Simon Foster: “Nearly every broadcaster borrowed the device to check the integrity of their own MADI signals”

MADI streams incoming to the OB unit — course FX, program & intercom all via multiple patching centres — it was imperative that the MADI signals could be checked for amplitude and jitter and the all-important audio monitoring.

“The MADI.MONI has all the above and with the flexibility of COAX, single mode or multi-mode optical SFP the unit is a must-have for any audio engineer on a major event,” he said.

“Word spread quickly in the Augusta TV compound [about] the only MADI test device on site. Nearly every broadcaster borrowed the device to check the integrity of their own MADI signals. Needless to say, the device is no longer on demo and is a permanent fixture of my tool kit,” said Foster.

Telegenic also chose Wohler Technologies to support audio monitoring for its recent contract to expand its business and broadcast major televised golf events in the United States. Wohler Technologies is providing Telegenic with its iAM-AUDIO unit that features a touch-panel interface allowing intuitive command and control of the unit and new I/O options, including Dante and Ravenna.

Telegenic opened its first office in the U.S. in 2016 in Atlanta, GA to support its growing operations in North America. The company operates a fleet of mobile television production vehicles and specialises in broadcasting large, live sporting and entertainment events. Actively engaged with many national and international clients, Telegenic provides television equipment and personnel for around 600 events a year in HD, UHD 4K and HDR.

“Having used several Wohler product lines on our TV trucks in the UK, we are very familiar with the capabilities and strengths of the company’s solutions,” said Telegenic’s Simon Foster. “We knew from past experiences working with Wohler, that the company would be a perfect fit for our trucks in the US.”

Telegenic chose to build its small broadcast system predominantly on Dante and HD-SDI embedded audio. However, the audio solutions had to be able to work with MADI, AES and analogue audio as well. A major benefit of using the iAM-AUDIO units is that less equipment was required to monitor the various signal types.

Also, some of the signals were 64 channels of audio and Telegenic did not feel that any other traditional hardware meter displays were up to the task. Wohler’s iAM-AUDIO solution addressed the company’s needs within a shallow 1RU package.