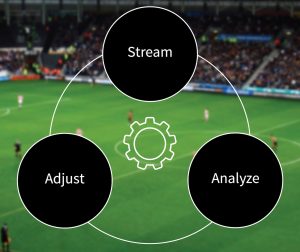 Showcased at IBC 2018, Project Orchid constitutes an important step forward for Telestream, heralding a “move to self-aware architectures” that will resonate with the continued growth in diversity of live streaming services.

Currently in the development phase ahead of expected product launches in 2019, Project Orchid is billed as Telestream’s “most radical R&D initiative” to date.

A concerted effort to support the next generation of ‘high-demand streaming operations’ by utilising integrated media processing, monitoring and analytics, Project Orchid revolves around the development of an agile, ‘self-aware’ video delivery architecture. The result, says the company, will be an approach that makes it possible to achieve automated decision-making and adjustment up and down the media supply chain.

In an increasingly fragmented OTT video market, explains Telestream VP strategy IQ solutions Stuart Newton, there is an onus on content creators and aggregators to secure and sustain the attention of consumers. For this to be possible they must guarantee a consistent Quality of Experience (QoE), to which end automating functions such as self-diagnosis, re-routing streams, bursting channel available and capacity can “ensure the highest quality streaming while still reducing operational costs and complexity,” says Newton.

Newton has been part of the Telestream team for the past two years following the acquisition of IQ. Since then he has continued his work “evolving the [former IQ] technology to cater to virtualised and container-based architectures, combining [it with] the Telestream offering to take it to a whole new level.”

He is particularly enthused by the industry’s current drift towards more flexible operational patterns, assisted by “cloud and NFT-based architectures, which provide unified strategies that allow us to take live-streaming [to new heights] based around microarchitecture for head-ends, with integrated monitoring [and] in a piecemeal fashion.”

With Project Orchid Telestream is looking to address this trend with a “self-aware architecture that makes it possible to achieve real-time feedback” at every stage of the workflow. And encouragingly, the feedback that the team received to the initial showcase at IBC was “even better than we expected”, hence the decision to “accelerate” the introduction of a productised solution, which is likely to take place near the end of Q1, 2019.

Once it has been manifested in the form of specific products, chief marketing officer Chris Osika expects the new architecture to be especially conducive to rapid turnaround channel launches. “There is often a huge amount of material that content providers have sitting on the shelf which they cannot release because [at present] they do not have the additional capacity to spin off new channels in a short period of time,” he says, adding that the new Telestream architecture will make it easier to “get such content out there and monetise it”.

Drawing the conversation to a close, Newton says that one of the guiding lights of Project Orchid has been an awareness of the variable nature in which customers are moving towards cloud-centric operations. For most, he observes, “it’s not an overnight migration to a pure public cloud – there is a natural path that customers are on [for their own activities]. So we are being very careful to take account of that.”