When International Television News (ITN) produced the IAAF International World Relay Championships, held last month in Japan, it ended up doing a relay of its own thanks to Telstra’s Distributed Production Network (DPN). Telstra’s high-performance media IP network transported 30 HD live camera signals from the Nissan Stadium in Yokohama to Tokyo and then onwards to the NEP Andrews Hub in Sydney. The signals travelled from Japan via diverse and hitless 10 gigabit-per-second circuits on the Telstra DPN to Sydney, using ultra-low-latency compression technology. 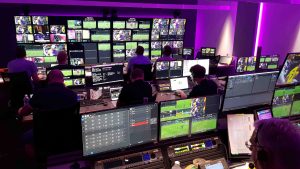 Andreas Eriksson, director of Telstra Broadcast Services, said the collaboration between Telstra, Nexion and NEP Australia set a new industry standard for international remote production. “The World Relay Championships is a unique event, and being able to provide athletics fans with two days of full, uninterrupted coverage produced in Sydney was very exciting,” he explained.

Bevan Gibson, CTO at ITN, said, “Our goal is to provide innovative broadcast solutions for the Rights Holding Broadcasters worldwide. The solution delivered on this occasion, with our partners Telstra and NEP, for the World Relays in Yokohama was nothing short of world-class,” he said. “We knew that pushing the boundaries of what could be done would be a challenge, but working together, this solution demonstrated the art-of-the-possible.”

Steve Kilsby, director of operations NEP, added that Yokohama World Relays was a truly satisfying project to work on for the team in the Andrews’ Hubs and on the ground in Japan.

“From its success, NEP has shown that with our technology and approach, distance is no obstacle to centralised production,” he said. “The collaboration between NEP divisions in Australia, UK and Japan, along with the fantastic work from Telstra and Nexion, demonstrates we can seamlessly deliver innovative solutions and pioneering events. Our clients around the world can be confident we are ready for our next challenge, regardless of geography or complexity.”

Ichiro Kawanishi, general manager sales and marketing at Nexion, said Nexion was very pleased to be able to provide the 10G circuits to connect Yokohama to the world.

“The World Relay Championships was at the same time as the start of the Japanese new era, so an unforgettable event for us,” he said. “With many global sporting events taking place in Japan over the next few years, we are looking forward to offering our network and other services to the international companies coming to Japan to broadcast these events.”

The Telstra DPN is an end-to-end IP network which has been custom built for the media industry. It enables professional media customers to produce live broadcasts at a distance from the actual event by sending multiple raw camera feeds, audio and equipment control signals over the network back to centralised production hubs.

Such true remote production removes the need for onsite production facilities and provides secure links between sports venues and production hubs on a bespoke network. Remote production over long distances requires a network that has the special characteristics of high bandwidth, low latency, low jitter and low wander, which the Telstra DPN delivers in Australia and now internationally.

Eriksson added: “The successful remote production of the ITN broadcast at the NEP Andrews Hub in Sydney opens a world of future international possibilities. It demonstrates that even across huge distances there is now a viable alternative to production facilities onsite at a venue. We’re excited to work with broadcasters and sporting bodies on future events utilising the Telstra DPN.”