Tennis Australia will use Grabyo to increase digital content production and distribution during the Australian Open, while feeding content to top players for distribution on their own social channels. 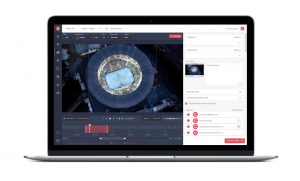 Grabyo CEO Gareth Capon told SVG Europe, “this is a first for Tennis Australia and Grabyo. We ran a pilot project for them at the Laver Cup back in September, and this is our first formal engagement.

“The key objective for Tennis Australia is to grow and engage their global audience. Social platforms are a great way to do that, especially given the time zone of the tournament.

“There are many European markets where these games are going to be live in the middle of the night. The live TV audience is going to be that bit harder, so obviously clips, highlights and social video roundups are going to be a really valuable part of the distribution experience.

“If you’re a tennis fan in Europe you’re going to wake up in the morning and jump on Twitter or Facebook and you’ll have a chance to see some of that content – as well as going to apps or web sites,” said Capon.

“From a set up point of view we’ll be working across the entire tournament, so every court will be available to the team. They will grab content and highlights from every court: it’s a pretty big operation. They’ve got their core digital and production team which is part of Tennis Australia all year round, and they ramp up that team with editors, content and social people during the big tournament.

“Their ambition to feed through to the players is interesting: we shall see how that plays out during the tournament. Making content available to the stars is a really smart idea, and something we’re going to see more of from rightsholders moving forward.

“The top players have a very large and engaged audience on social media — and tennis is a particular example of this, being an individual sport. Giving players access to that distribution mix to help drive additional reach and engagement is smart.

“Tennis Australia have always been a pretty progressive rightsholder. They’ve taken advantage of digital opportunities early. It’s great to see what you might see as a traditional rightsholder being so open to engaging in new forms of content and distibution,” said Capon.

The 2018 Australian Open reached over 900 million homes in more than 220 territories. Xavier Muhlebach, supervising producer at Tennis Australia, said: “In 2019 we want to connect to fans all over the world faster and in a more personal way than ever before. Our global audience is incredibly engaged and hungry for great content, so by working with Grabyo we have created a content strategy that uniquely targets every possible market. Using this platform has given us the freedom to be creative and make great content without the concerns of distribution slowing us down.”