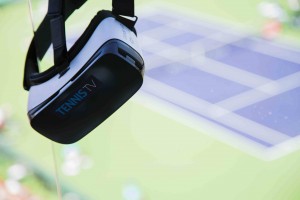 ATP Media is the latest major sports league to wade into the virtual reality waters, teaming up with VR production outfit LiveLike to produce matches live in VR from last week’s BNP Paribas Open in Indian Wells, CA. The live VR experience, the first ever for professional tennis, featured three camera angles from Stadium 2 matches and was streamed to VR headsets inside a VIP viewing suite at Indian Wells Tennis Garden.

“Virtual reality is something that we’ve been looking at for quite a while and have just been trying to find the right time to demo it,” said ATP Media Digital Director Stuart Taylor. “Tennis is definitely great for the VR experience. We see VR as a potential development in the digital area and our TennisTV product for us. It’s bringing fans even closer to the action no matter where they are in the world. They can get right up close to the stars of the ATP World Tour. It’s about giving that money-can’t-buy courtside experience or the thrills of men’s tennis.”

LiveLike used three unmanned, stationary Sony F-55 4K cameras outfitted with 8-15mmn Canon fisheye lenses to capture the three angles at Stadium 2. These feeds were integrated into an augmented-reality experience, created using Avid/Orad software, that featured virtual videoboards above the court showing the linear feed of the match and simulating a luxury box as if the viewer were at the venue. In the virtual box suite, the viewer could switch between angles and see player statistics, while keeping track of the action via the linear-TV feed being shown on the virtual videoboard.

“You can choose any of the angles, but then you also have the [virtual] Jumbotron showing the switched experience that’s on your TV, including zoomed-in replays, highlights, and specific camera angles,” said LiveLike Chief Business Officer Miheer Walavalkar. “So, as a user, you get the best of both worlds because now you’re sitting in the stadium but you can switch seats in the stadium at will and also see the director’s cut on that giant display.”

LiveLike’s production philosophy is camera-agnostic, according to Fabrice Lorenceau, co-founder/head of production, and the company has used a variety of Sony, Blackmagic Design, and RED 4K cameras on its productions. The Sony F-55 was selected for this production because the extreme shadows and harsh sun at Indian Wells necessitated a camera that offered as much latitude as possible.

“We are using cameras that have large sensors because of the optics; obviously, when using an extreme wide-angle lens, we can work much better with a large sensor,” said Lorenceau. “We are investigating if there are any options with B4-mount [lens adaptors], but we haven’t seen anything that has been appealing for our needs so far. Our goal is to be camera-agnostic and make it as broadcast-friendly as possible, but we also have to make it as high-quality an experience as possible, and we have yet to see a B4 option that fits those needs.”

Walavalkar added, “The wide-angle fisheye lens is what really gives you that immersion. We have always been capture-agnostic, which has proven that we can create an amazing experience without the need for extensive specialty-camera rigs or stereoscopic rigs.”

LiveLike’s onsite footprint was extremely small, deploying just one camera operator to set up and manage all cameras, an augmented-reality engineer, a VR-streaming expert, and an AR engineer.

“We have very limited space requirements, and our goal is to have as unobtrusive a setup as possible,” Walavalkar explained. “We have tried to make sure that, although we are innovating, we are also working within the confines of existing [broadcast infrastructure], because the more and more elements you add, the more complicated it gets. From a production standpoint, 3D TV was a big fad and then flopped [partially] because, from a production standpoint, it was very expensive and consumers did not [adopt] fast enough.”

Taylor said that feedback from media, VIPs, and players like John Isner was extremely positive, but he stops short of committing to productions in the near future.

“We’re just going to take this [VR content] back, look at our learnings, and assess it. We think it’s an exciting possibility, but we need to discuss it internally and look at how VR can be part of ATP Media products in the future,” he said.

“We are really focused on the live aspect because that is what our fans want to see on our products and on our broadcasts: live tennis. On-demand products would certainly complement the live product within the experience, but, for us, it’s all about live.”

As for LiveLike, which took home first place at TechCrunch’s 1st And Future startup competition last month (winning $50,000 and a meeting with NFL execs), expect more live VR sports productions in the near future.

“I think VR lends itself to tennis perfectly, and the setup is a similar setup for most stadium sports,” said Walavalkar. “Stadium sports are perfect for it, but, then again, we’ve also been thinking on looking into Formula 1 and golf, which are a different use case. In this case, you are switching seats in the stadium; in those cases, you are switching seats on the track or the course, where you don’t normally get access.”