Tethered 4K drone to be demonstrated at Football Summit 2019

XD Motion will be showcasing its latest aerial filming innovation at SVG Europe’s Football Summit 2019 at the Stade de France later this week. 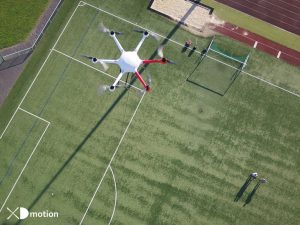 The French company’s 4K tethered drone includes full power and fibre optics and is equipped with a full broadcast HD and 4K camera with zoom with HD lens control.

Used for beauty shots, footage from the drone can be transmitted live for hours, or even days, thanks to the constant power supply. The use of a two-member crew allows for a fast installation that can easily be moved to different venue locations.

Additionally, the drone will shortly be VR-compatible. The VR capability, which is currently under development, is set to be used at a major sporting event this coming June.

Commented Dentan: “No one else is able to broadcast on a tethered drone with 4K; no one else does it.”

“Because the drone is powered from the ground we can run it for days if needed. There are fibre optics in the cable as well, so we can use it to provide live footage, and the tethered drone will be capable of being used for VR footage soon,” added Dentan.