The breaking point: Is Esports on the verge of a broadcasting boom?

The potential of esports has everyone in the industry from media companies to broadcasters and game developers looking to get into the game before esports becomes the crossover phenomenon that many expect it to become over the next decade. 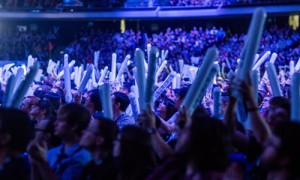 On the broadcasting and production side of the conversation, positive developments have been born from a noted shift to the center from both sides of the aisle. Broadcasters are understanding that their traditional TV ways alone are not going to engage the esports audience, and those in competitive gaming — and the companies making the games — are acknowledging that, to be successful, esports need to be more inherently watchable.

Chris Puckett, a popular host and esports commentator for Activision Blizzard — which develops mega titles such as Call of Duty, Overwatch, and World of Warcraft — and Major League Gaming, says that he has been encouraged by the attention that game developers have given to the watchability of their games.

“It doesn’t matter how good that new game is mechanically,” he said at the recent Cynopsis World eSports Summit. “If you can’t watch it, it’s never going to succeed as an esport.”

Some of the top developers have even been calling in esports experts during game development to trial games and discuss what in-game tools could make it easier to produce an esports broadcast.

“In the past, we used to just have the raw game,” says Puckett, who has been involved in esports production since 2006. “We’d have eight different feeds and try to get a macro together where we could press button one and bring up player one on the screen. That broke the machine many times and crashed our streams over and over again.”

Competitive gaming has been going on for some time, but the sport could be in a position similar to UFC’s just a few years ago: gaining the respect of major networks and receiving the production treatment that a major “stick-and-ball” sport would get. Look no further than the efforts and resources deployed by Turner Sports and its ELEAGUE property.

Now in its third season, ELEAGUE has turned its attention from shooter games like Counter Strike and moved to an iconic fighting game in Street Fighter V. Turner Sports has a tremendous broadcast facility and esports arena at its home in Atlanta that’s designed to give its esports tournaments the big-game feel that they deserve. The network has also committed to storytelling and building the names and backstories of some of the best players and teams within the ELEAGUE universe.

“For ELEAGUE, putting it on network television and having consistent seasons in programming around it is one way of getting it mainstream, but it’s more than just sticking it on television and hoping that it works,” says Christina Alejandre, GM/VP, esports, Turner Sports. “While we have stayed true to esports in what we do, we also, in all our broadcasts, try to make it what I like to call with my team ‘human-readable.’ If you are watching at home and you don’t understand Counter Strike, [we are] trying to find ways that are subtle, without beating you over the head to help you understand what is going on so that you get hooked into what you are watching.”

In addition to watchability, many in the space agree that esports needs more organisation in the form of scheduling and predictability. Not every event can be a tent-pole event, but all events should be on a consistent schedule — like traditional sports — and build to those tent-pole events where mega events can be held for those attending in person and watching at home.

“This requires a bigger plan than just one event,” explained Marc Koenig, marketing director, NGE. “I think that doing any kind of event in its own vacuum without a greater product strategy or plan to support it and a vision for where things are going and why the event matters, why fans will care about it, and what the next point of engagement is, is a backwards way to approach events.

“To that end, the people that are going to be pushing events forward are publishers and developers who have that vision of how this connects to their greater ecosystem, how it connects to more people playing their games and purchasing their games. Without that bigger vision, a lot of this is short-term enthusiasm, and I think we need those tent-pole events if this is going to grow long-term.”

Koenig also noted a key difference between the expectations of fans who attend or watch esports events and those of the traditional sports fan. When an avid esports follower goes to an event at a major arena like the Staples Center in Los Angeles, there’s still an expectation of interaction between spectator and player. Most esports stars were born from interacting with their viewers directly on platforms like Twitch, YouTube, etc.  In Koenig’s opinion, any esports event or property worth its salt will account for this element in its event planning.