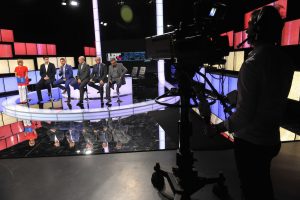 A football panel in the HRT studio in Zagreb

Despite the popularity of the English Premier League across the world, European leagues and cup tournaments still hold audiences in their respective countries. And the broadcasters with television rights in those nations handle the coverage in different ways to suit their audiences (and their budgets).

“We broadcast 17 live games a season including FAI Cup semi-finals and final,” explains Eugene O’Neill, RTÉ’s executive editor, soccer. “We also covered Dundalk’s Champions League qualifier home and away against Rosenberg. We also cover Republic of Ireland FIFA World Cup European qualifiers home and away as well as highlights from the ROI group’s games. For most games we utilise seven cameras, with four used for actual match coverage, although these will be supplemented for the international fixtures.”

Alongside the live matches, RTÉ produces Soccer Republic, an hour-long highlights show on Monday evenings that runs throughout the 38-week season.”

“Live games are a mix of outside broadcast or in studio depending on the game. Soccer republic is done in the Dublin studio of RTÉ. Although we have no plans for remote production at the moment, we do EFP reports from around the grounds for inclusion on Soccer Republic.

O’Neill says that although Augmented Reality has not yet been used for the studio presentations, there are tentative plans for its introduction in the near future. “We are always looking to improve presentation and have recently incorporated a touch screen which offers more innovative presentation and in-depth analysis across all of our football coverage.”

Like many other broadcasters, RTÉ is still very much in the early planning stages for the World Cup in Russia, so has nothing to report.

Football is also available in Ireland via TV3, the commercial free-to-air television channel operated by Virgin Media Ireland and owned by Liberty Global.

Although TV3 does not cover domestic football leagues in Ireland, it does broadcast first pick UEFA Champions League matches on Tuesdays.

The coverage of the Champions League matches also features in a highlights programme that originates in TV3’s Virgin Media TV3 HD Studio Dublin, with Graeme Souness, Neil Lennon and former Rep of Ireland manager Brian Kerr as the main analysts.

In addition, TV3 also broadcasts live coverage of England’s European Qualifiers to the 2018 FIFA World Cup through an agreement with Sky Sports, the official licensee in Ireland.

The remaining four England European Qualifiers to the 2018 FIFA World Cup will also be available to watch live on 3player. 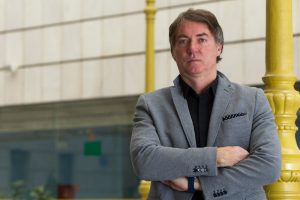 Skynet iMotion Activities (SiA) was created in 2005 with the launch of Proximus TV and handles the production of content that is offered on Proximus TV and broadcast on its own channels, which are exclusive to the Proximus TV platform.

“SiA produces and broadcasts Belgian and International football, along with other sports,” explains Massimo D’Amario, Managing Director, Skynet iMotion Activities. “We currently provide over 700 live sports competitions per year and broadcast on three linear TV channels. As far as football is concerned, we cover the Jupiler Pro League (Belgian 1st Division A League), and, not surprisingly, the Proximus League (Belgian 1st Division B League).

All of the games are covered live, and SiA also produces a highlights programme that is broadcast on both TV and App on the Monday following the week-end fixtures.

“For the actual games, we have opted this season – and the next three – for a ‘close to the pitch’ coverage for big games – 120 out of 330 – instead of using one of our studios.  These allows the commentators to be on screen, plus the host, analyst and guests to be shown on the pitch table.”

D’Amario says that his team is now making extensive use of IP Remote production at Proximus. “We employ remote IP technology at 100 per cent of the games of Proximus League. For the 120 games in the Jupiler Pro League, the clean feed is produced by the Belgian Pro League and the “close to the pitch” Proximus programme is produced remotely through IP. In fact, we have been producing the Proximus League 100 per cent in IP since the 2016-2017 season. In December 2016, we also performed a successful test of a 15-camera game fully produced in IP Remote. Proximus is the forerunner in Belgium when it comes to the use of IP remote production for football games.”

He says that much was learned during last season’s coverage and that has allowed SiA to smoothly implement the IP remote production for the Jupiler Pro League. “For games involving the Proximus League we normally employ six cameras, while a similar number is used for small games in the Jupiler Pro League. When it comes to the bigger games, we will utilise up to 15 cameras.”

He continues: “AR will be used for the first time this season and will be incorporated into our programmes. We have opted for the Deltacast system.”

When it comes to international games, D’Amario says that traditional techniques for Champions League are used – with broadcasts in the group stages of eight simultaneous games involving teams from France and The Netherlands. “There is also an extensive studio programme for those games with Multi-Live programming that includes switching from game to game.”

He concludes by saying that Proximus TV also has a very extensive Video On Demand catalogue that is full of sports clips/trailers and TV programmes.

Also in Belgium, broadcaster VRT provides live coverage of the Belgian cup, European Qualifiers and the Europa League. Normally, between 8 and 15 cameras are used for these games.

The broadcaster also provides a Monday evening highlights magazine called Extra Time which covers games from the Jupiler Pro League. There is also a Europa League magazine programme, both of which originate in VRT’s broadcast centre in Brussels.

Although the broadcaster has not used 360-degree technology for football transmissions, it has experimented with the equipment for cycling events – so there may be a move into match coverage.

At the time of writing, plans for World Cup coverage are still being determined.

Although national broadcaster in Croatia, HRT, doesn’t cover games of Croatian First Football League, it does produce special studio shows where matches are analysed.  “However, we do cover UEFA Europa League games which involve Croatian clubs and that are normally played on Wednesdays and Thursdays,” explains HRT sport journalist, Viki Ivanović. “Those games for which we have rights are covered live.”

He reports that HRT also produces a highlights programme centred on these matches. “If the game is played abroad, we utilise a studio at the stadium, while if it is based in Croatia, then it will originate at the HRT HQ in Zagreb.”

For the 2017-18 season, Ivanović says that HRT is planning to introduce better graphics to enable the studio presenters and guests to analyse moves and tactics more fully than has been previously possible. “This will be especially helpful as we look forward to coverage of the World Cup in Russia next year.”

Programme director, Ranko Varlaj, continues, “As mentioned earlier, HRT does not hold TV rights for Croatian First Football League games, except finals. However, we do cover National football team games, both foreign and domestic games and for these we normally use between 10 and 12 cameras. These are covered in the conventional way, and we have no immediate plans to use remote production technology.”