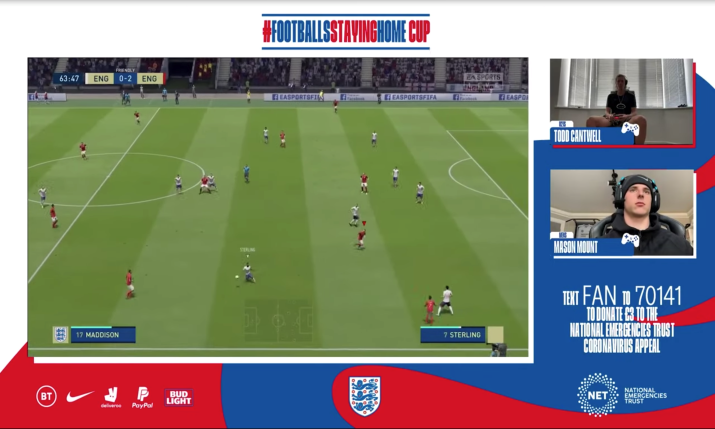 The English Football Association (FA) is broadcasting classic matches and hosting a FIFA20 tournament to keep fan engagement high in the absence of football, and is utilising Grabyo’s technology to facilitate this content.

Using a combination of former English football stars, classic England matches and a FIFA20 tournament, the FA has crafted an alternative strategy to engage football fans with the English national teams in the absence of live football.

The long-standing partnership between Grabyo and the FA has enabled it to deliver a truly fan-first digital strategy in a challenging time for content production. Enabling fans to stay in touch with football from the safety of their homes while having the ability to work remotely ensures continuity across the FA channels, with several campaigns being produced as part of the #FootballStayingHome initiative.

The FA’s Football’s Staying Home initiative is encouraging people to stay at home during the current COVID-19 pandemic whilst learning, having fun and playing football.

Altogether, 16 England players from the men’s and women’s senior teams and the men’s U21 team are participating in a knockout FIFA20 tournament, the Football’s Staying Home Cup. Players include Lucy Bronze, Marcus Rashford and Todd Cantwell. While playing, each match has live commentary by leading eSports commentators Brandon Smith and Richard Buckley.

The FA’s multi-platform approach has increased its reach and allows fans to engage with content across all of the FA’s digital channels, with the aim of raising awareness for the National Emergencies Trust.

Each match is broadcast to YouTube, Facebook and Twitter with live clips and highlights distributed in real time and after each game. Using Grabyo, the FA was able to keep each production on-brand, activating sponsors and driving donations to the National Emergencies Trust.

Aaron Duckmaton, head of marketing, Grabyo, spoke to SVG Europe about how the company’s technology is being used specifically to deliver a fan-first approach with the FA in this instance.

He said: “The flexibility of Grabyo’s cloud-native platform has allowed the FA to deliver engaging content completely remotely. Grabyo Producer provides a simple browser link to collaborate with talent in their homes, in this case current and former players, so the FA was able to connect fans with their footballing heroes past and present.

“The FA’s content is centred around bringing the fans and players closer together, and with no live football currently being held, the FA needed to get creative. Grabyo’s suite of tools helped its digital team to create live broadcasts with high production values that were highly accessible to football fans,” Duckmaton noted.

Another initiative launched by the FA in recent weeks is #ReLions. An innovative way of keeping in touch with fans over the coming months, the FA is re-creating the live experience for fans by broadcasting classic matches to YouTube as if they were live.

Further enhancing the experience, the FA is using Grabyo’s remote production tools to bring in remote guests to commentate on the match and watch along. England’s famous victory over Germany in the 2002 World Cup qualifiers was historic for many reasons, as England beat Germany in Munich for their first qualifier defeat in the city. Who better to do a watch back than the hattrick scorer Micheal Owen, and fellow teammate who was also on the scoresheet from that night, Emile Heskey. The pair, appearing from their own homes via webcam, discussed everything, from the match to goal celebrations, with remote host Adam Smith as they re-lived a great night for England.

On what more can be done by content providers at this time, using technology to encourage fans to stay at home and to help them enjoy sport and feel part of something, Duckmaton added: “The technology is available for content creators to bring the world to consumers everywhere. Cloud-based production tools can help publishers to collaborate with anyone, anywhere world, to help people to feel connected to their communities and to each other.

“Now more than ever, technology is connecting people,” he went on. “By providing this sort of entertainment, publishers can use their platform to promote positive messages during this time, as well as drive awareness to reliable sources of information, promote charitable organizations and any help they need. There is a responsibility for those with a platform to do so, while also creating great content for everyone to enjoy.”

Gareth Capon, Grabyo CEO, commented: “The FA has always been a leader in devising content strategies that put fans at the heart of everything they do. We’re proud to play our part in engaging fans and bringing joy to those who need it using sport, while raising money for National Emergencies Trust at a pivotal time.”

Damien Cullen, senior content innovations manager at the FA, added: “ Our #FootballStayingHome initiative is designed to bring football fans content that is educational, entertaining and empowering during this challenging time. In particular, the #FootballsStayingHome Cup helped us to reiterate the important Government advice to stay home while also shining a light on the great work of the National Emergencies Trust. Our long standing partnership with Grabyo has enabled us to bring this to life with some great content that we hope fans have enjoyed. We will continue to innovate and develop new ways to keep bringing the England teams closer to fans.”