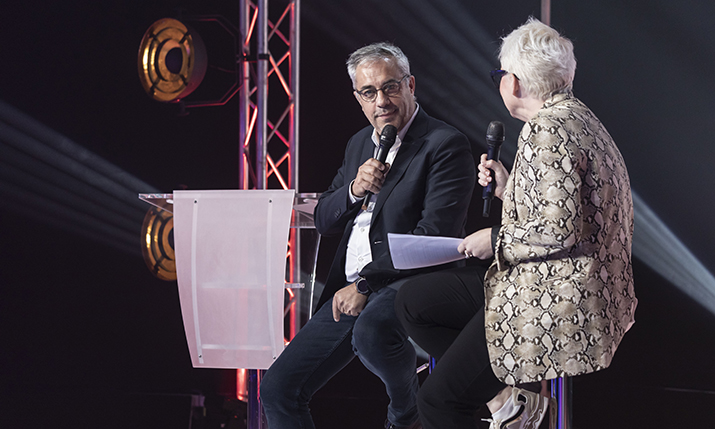 Gilles Sallé, CEO at AMP Visual TV, on stage at the French Premiere with Lise Cosimi

Gilles Sallé, CEO at AMP Visual TV, used the first gathering of SVG France at The French Première to talk about the company’s recent activities, including its acquisition of Euromedia France (EMF).

Clarifying the scope of the acquisition, he explained: “We acquired the mobile video business of Euromedia France, which includes 130 employees and six mobile units.

“Our customers understood that they needed strong service providers and EMF’s VM business no longer had the critical mass as the French market was not creating enough value for two major providers.”

Sallé believes the new entity will be better placed to face the challenges of the digital and broadcast transformation while maintaining the excellence of the French audiovisual technical industry.

He continued: “We want to create a French service provider capable of meeting the challenges of the market, that preserves and cultivates French know-how and helps us achieve sufficient critical mass to regain profitability and growth capacity. The acquisition also enables us to pool our costs and position ourselves as more of a partner than a service provider to our clients.”

The intention is also to aim for international development based on specific know-how.

As the acquisition leaves only one major player in the French market, Sallé highlighted how he believes the move will benefit customers.

“We will have a less cumbersome organisation: there will be no double site for the Paris head office, the same for the management team, and there will be more logic in our travels in order to reduce costs and therefore our carbon footprint. In similar situations, we have always shown a great sense of responsibility towards the market, for example when we merged with Visual TV, the integration of Soft Broadcast, the takeover of EMF’s studios, and so on. Our clients will keep the same proximity and responsiveness with our teams – 10 contacts on average.

“AMP Visual TV is an independent company that has always kept the same values: a sense of service, a taste for innovation and a culture of human values. A strong French service provider is essential and will benefit the entire value chain. We have a strong international reputation that must be maintained. We will only succeed with the trust of our customers.”

Looking ahead and Sallé explained the challenges that AMP Visual TV faces in the years ahead, particularly in the sports sector, and how it is working to overcome these.

“We are fortunate in France to have a worldwide reputation for sports coverage,” he said, citing the company’s work for French championships such as EDF, UCL and EL as well as channels, broadcasters and federations. “We are working to be on the Rugby World Cup and, in 2024, the Olympic Games in Paris and we are focusing our efforts in three directions.

“Firstly, our customers. We must adapt to the evolution of our customers and our markets while strengthening our proximity to them and expanding our ranges to meet expectations. We have also developed new relationships with broadcasters, rights holders and producers.

“Secondly, we must innovate and make the investments necessary for our development.”

This includes investing €30 million over the next three financial years to keep up with changes such as interactivity and new formats, as well as investing in new technology such as remote production and AI tools.

“Finally, we must preserve and strengthen our know-how,” he continued. “People are our greatest resource. We must make their lives easier and allow them to develop fully. This is a human profession. We must preserve it!”

AMP Visual TV is one of Europe’s leading technical service providers for TV. Across its five brands – AMP Visual TV, IXI Live, RF Factory, Letsee and Studios de France – it provides all the services required for the production and broadcasting of programmes on location and in studios and has been in operation for over 35 years. The company is active across multiple sports, delivering 90% of Ligue 1 football matches, 100% of Ligue 2, rugby, basketball, six motorsport championships, esports and even petanque.

The French Première took place on 16 November at Studio Gabriel in Paris. Spearheaded by SVG Europe advisory board member Lise Cosimi, it was the first event from SVG France, which aims to create a space for the French sports broadcast community to come together, exchange ideas, network and stay informed.