The Masters 2019: CBS Sports reflects on ‘every shot, every hole’ coverage

The Masters, as CBS announcer Jim Nantz is fond of saying, is a tradition unlike any other. But this year it was not only notable for tradition but for arguably the most important moment in sports this decade: the improbable victory by 43-year old Tiger Woods.

His win delivered big-time ratings for CBS whose production and technology efforts matched the level of play on the course as, for the first time ever, viewers at home were able to see every shot from every hole by every golfer.

“Every year our operation seems to get bigger and bigger and this year was no exception,” said Patty Power, EVP, operations and engineering, CBS Sports. “This year, the team was tasked to cover every single shot and then stream it. When you add that to all the other elements we produce at the Masters, this is the biggest show we have ever done — including the Super Bowl — by sheer volume of equipment, trucks, and people. It was a unique event.” 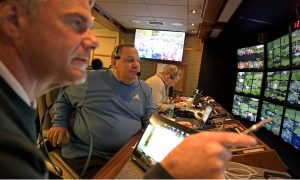 Mike Francis, VP, remote engineering and planning, CBS, oversaw much of the planning of the ‘Every Shot, Every Hole’ production, which began as an idea from the team at Augusta National last May. “In collaboration with Augusta National, last fall we decided that it would debut at the Masters in 2019,” he said. “Our CBS production and operations teams were challenged to turn the vision into a reality. The result was the creation of more than 21,000 video clips of shots over four days that were available on Masters.com minutes after occurring.

Continued Francis: “The goal was to cover every shot of the tournament, with a few exceptions like a ball deep in the woods or a tap in putt. And we wanted to cover everything from the first tee shot to the winning putt in a manner that is consistent with how CBS covers the Masters. That means you see the ball leave the tee, land, and then cut back to a reaction shot.”

It took a lot of research, development, and coordination with CBS, Augusta National, and IBM to figure out the right way to get that accomplished and to do it without impacting the quality of the main TV broadcast.

“We had to figure out a new camera plan so we wouldn’t miss anything and then figure out if we could fit a massive record operation on site,” said Francis. “The majority of qualified EVS operators were actually already working for us or doing other sports like baseball. So, we had to look for non-traditional solutions and settled on Hawk-Eye Innovations.”

The ultimate workflow involved having record servers on site at Augusta National, but operators located in Atlanta and outside of London in the United Kingdom. The key was making sure there were enough staffers at those locations available to cover all 18 holes at once, as there is a two-to-three-hour window when there are golfers on all 18 holes.

“Thumbwar helped us develop the end-to-end file-based process with custom transcodes that needed to be developed,” said Francis. “SMT would begin the process with an automated data report that would be sent to the Hawk-Eye queue. The operator would then pull all of the angles from the hole for the shot and then export [edit cuts] back to the server in Augusta, which would then transcode the file for delivery to IBM to be viewed on Masters.com.

“In addition, high-res versions would be available via EVS IP Director. The beauty of the workflow is the remote operators did not need to record locally as they were controlling the servers via a really high-end desktop client that was built for gaming and had low latency to trigger the servers in Augusta.”

Audio was also trickier than usual as a customised program for Hawk-Eye was written to ensure the proper audio went to the appropriate channels in the streaming clip as those clips are stereo, not in 5.1 audio. “It took some custom development to make sure the channels landed in the right place,” said Francis.

All told, there were 110 cameras circulating around the golf course plus additional POV cameras in the announce booths and cameras in Butler Cabin that bring the total to around 120. The production for the Masters is unique as the first eight holes are produced out of one truck (NEP’s SS24) and the final 10 holes are produced out of NEP’s SSCBS truck. Game Creek Video’s Encore truck was on hand for the featured group coverage.

“By volume, the featured group show is the biggest show as they take every course camera,” said Francis. Encore was also home to the swing EVS replay team, which can work on the show covering the first eight holes or the final 10.

“And then we also had two 4K shows on Amen Corner that were done out of Game Creek Video’s Glory, which has been upgraded to 4K,” said Francis. “Game Creek Video’s Pride handled the 15 and 16 featured hole coverage.”

Another first in technology happened this year in Augusta when CBS used markerless motion technology on the Tournament Practice Facility for the first time ever on US television or any golf telecast worldwide. SIMI deployed five high-end industrial camera systems and then processed the images through their proprietary algorithm allowing full body skeleton analytics.

“For the first time, we were able to dissect the inner workings of the body in areas unexplored prior, such as the details of hip rotation, shoulder, arm, and knee contortion angles, as well as the speed of the golf club” said Jason Cohen, VP of CBS Remote Technical Operations.

There was also another new wrinkle this year: the Augusta National Women’s Amateur, which was held the weekend prior to the Masters. NBC was tasked with producing the event although CBS was in charge of the technical buildout (similar to the relationship with ESPN for the coverage of the Par-3 contest.

“We had to have a lot of the infrastructure up early,” said Power. “NBC was really great about letting us take the lead, but they understand golf, so it was a really good collaboration.”

Francis says the Women’s Amateur was cut out of NEP’s ND1 truck as the SSCBS truck was in final preparation for the Masters. But having things like effects mics in place for the NBC event allowed the CBS team to get a bit of a jump start on technical set up for The Masters.

“We both used a lot of the same equipment and NBC was good about hiring as many of our technicians as were available,” added Francis.

The final Sunday of the Masters offered up additional drama beyond Tiger’s win. The day before it was announced that televised coverage would begin at 9 a.m. and streaming coverage at 7:30 a.m., as a storm front was due to arrive Sunday afternoon.

Instead of groups teeing off in pairs, they teed off in threesomes and play also started on the first and 10th tees. The move required the team to arrive earlier than usual (and in the dark) but also avoided the need to complete play on Monday. The result was a Sunday morning filled with drama and plenty of technology.

Tiger’s win portends good ratings for CBS once again when the PGA Championship tees off on May 16 from the Bethpage Black Course in Long Island. The CBS team is already on site gearing up for that event.

“I am really proud of the run so far this year, with Super Bowl, Final Four, and the Masters,” said Power. “The PGA Championship is the last piece and we’re excited.”