The Match to be simulcast on TNT, truTV and HLN with international distribution through Warner Bros. Discovery Sports 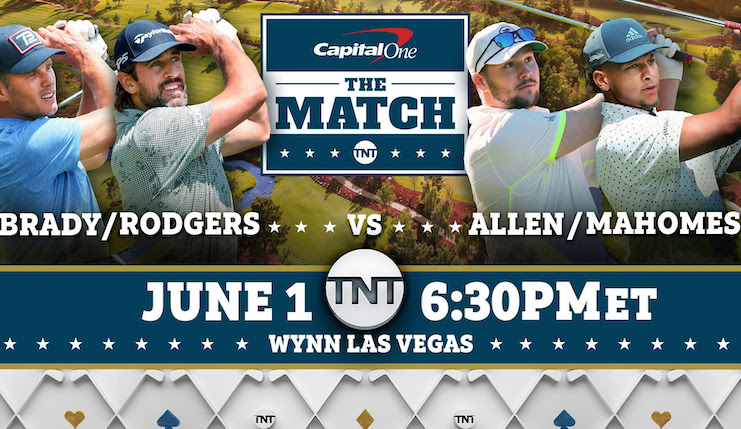 Turner Sports, a division of Warner Bros. Discovery, will exclusively present The Match – headlined by a foursome of legendary NFL quarterbacks in Tom Brady and Aaron Rodgers teaming up to face Patrick Mahomes and Josh Allen – on TNT, starting at 18:30 ET on Wednesday 1 June, with simulcasts available on truTV and HLN in the US.

Fans watching outside the US will also be able to watch the star-studded event through Warner Bros. Discovery Sports channels and platforms, marking the first time Turner Sports and its international sports partners have collaborated to deliver true global distribution and audience reach for a sports event. Viewers can check local listings to find coverage in their country via a section of discovery+, the Eurosport app, Eurosport 2 and GolfTV powered by PGA Tour.

The Wynn Las Vegas, the only golf course on the Las Vegas strip, will host the live golf event series for the second time in a row, and viewers will be treated to unprecedented access to the players and action through open mics throughout the entire 12-hole competition.

The match will follow a ‘shamble’ format: all four golfers will tee off at each hole, and each team will select their best tee shot to play. From then on, golfers will play their own ball until they hole out, with the best golfer’s score determining the hole’s winning team.

Feeding America will be the primary charitable organisation supported through this edition of The Match. Turner Sports has televised five editions of The Match, with the series serving as a significant platform to support philanthropical organisations throughout the US. To date, the event has raised nearly $33 million for various organisations and has donated nearly 17 million meals to Feeding America.