The new rules of fan engagement: what works and what doesn’t is still anyone’s guess 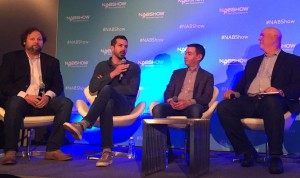 Moderator Barry Bedlan, deputy director, AP sports products, The Associated Press, started an NAB 2017 session on fan engagement with an informal survey, writes Michael Silbergleid: in a room dominated by sports fans, he asked how many had consumed sports in the past month only on a mobile or connected device (such as a Roku box or Apple TV). The answer was about half. That meant that half the fans in the room did not get their sports through traditional television, cable, or satellite.

That’s a hard fact for leagues, teams, players, and broadcasters to get used to — and to figure out how to deal with. That’s especially true as user-generated content (UGC) becomes ever more popular.

According to Jim O’Neill, principal analyst/strategic media consultant, Ooyala, traditional television ratings are down year-over-year almost across the board, regardless of league. NFL was down 12% during election season, 9% after the election, and 5% during the playoffs. MLB was off, World Series with the Cubs not withstanding, and PGA recorded the worst ratings for a Sunday Masters since 1980. “This just continues on and on,” said O’Neill.

But engagement goes beyond traditional TV viewing, with consumption increasing on other platforms, and that’s key.

For Eric Black, CTO, NBC Sports Digital and Playmaker Media, engagement means making sure that content engages fans wherever they are on whatever platform they’re using: TV, connected devices, mobile, and the desktop. “We want to make sure that we’re delivering a high-quality, broadcast-level experience to the fans.”

NBC Sports streams virtually everything that’s on live linear TV and goes beyond that ‘TV’ content with, for example, host feeds — which it has used during the Olympics since the 2012 London Games. Although ‘this is an opportunity, not a challenge’ might be a cliché, NBC Sports has seen a dramatic increase in fan engagement on connected devices. Nevertheless, that comes with a caveat: fans expect to see broadcast quality, even with non-broadcast content.

And when it comes to engagement, millennials are the Holy Grail. Although it’s true that, overall, they have less money than Gen Xers or boomers, they also tend to spend everything. That’s because, according to O’Neill, “they haven’t discovered debt yet.” But they don’t want to pay for media content (although they will pay dearly for a new pair of Nikes or a GoPro camera).

For Twitch — a direct-to-viewer videogame competition platform (known as esports, and, yes, people will actually watch other people playing videogames; even TBS ‘airs’ ELeague, live videogame competitions for the casual viewer — it’s UGC that attracts viewers. “UGC fan behaviour is real, not staged,” said Eric Brunner, sports partnership lead, Twitch. On Twitch, when athletes and celebrities (as users) are gaming, it’s the real person that viewers are seeing, interacting with, and developing communities.

Social networking also plays an important role with fans. According to Bedlan, the most popular social-networking feed is the locker-room feed, especially when a player is thrown off the bench. Consider it a combination of enjoying the misery of others and the fan as ‘celebrity wannabe.’

As in all conversations about fan engagement, millennials eventually took centre stage. It’s universally agreed that millennials don’t want to watch a game that takes hours but will watch a highlights package. It’s important to note that, according to O’Neill, the majority of 18- to 27-year-olds have no paid subscription. When a commercial comes on their device, they “self-TiVo,” moving to another device to check other platforms.

However, according to Brunner, Twitch has found that millennials are more willing to deal with ads for extended content. The key is not delivering ads, it’s delivering eyeballs, and a viewer is not necessarily keeping eyes on the screen. Brunner emphasised that ads need to be personalised and interesting to keep millennial eyes on the screen.

John Bishop, CTO, Media Business Unit, Akamai Technologies, noted that, in today’s digital age, there are no second-class screens: “All screens are the same, with the same expectations, which is a real change from five years ago, when mobile viewing was five minutes on a 4-inch screen.” With better devices and higher bandwidth, long-form programming is the norm, especially with Wi-Fi availability to avoid data-plan limitations and costs.

Unique to digital platforms, according to Bishop, is the ability to do 10-second opportunistic breaks to counter the lack of attention compared with a two-minute break. Meanwhile, NBC Sports’ Black targets the 90-second sports break, where the ad content is related to the main content to keep fans engaged. However, O’Neill noted that Ooyala’s research has shown that the 15-second break is “hated.”

In the end, fan engagement comes down to one simple thing: to see what works — regardless of the platform or model used (PPV/SVOD/AVOD/TVOD). What wasn’t in agreement is whether linear TV is alive and well, or not.

Akamai’s Bishop put it plainly: “Give the fan, which is short for fanatic, as much as you can.”