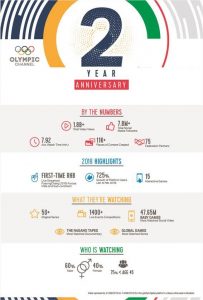 The Olympic Channel is celebrating its two-year anniversary with more than 11,000 videos representing all Olympic sport disciplines and 206 countries, 50 original series, partnerships with 75 sport federations and organisations, and availability in 11 languages.

The over-the-top (OTT) global media destination launched in August 2016 following the Closing Ceremony of Rio 2016 in support of the IOC’s goal, set out in Olympic Agenda 2020, of providing a new way to engage younger generations, fans and new audiences with the Olympic Movement all year round.

The Olympic Channel has also provided an additional distribution platform for its 75 federation partnerships, which includes collaboration on more than 1400 live events to date.

In addition to the global digital platform, the Olympic Channel has several distribution partnerships in place with rights holding broadcasters including branded linear channels in the United States and MENA, and digital portals and programming hours in Europe, Japan and Brazil.

Olympic Channel general manager Mark Parkman said: “As the global media platform of the Olympic Movement, our programming will continue to feature athletes 24 hours a day, 365 days a year attracting new audiences as we enter our third year and look ahead to the upcoming Youth Olympic Games in Buenos Aires, Olympic Games Tokyo 2020 and beyond. I am grateful to our team, who continue to make great strides in developing unique partnerships with our stakeholders as we expand our global footprint, for their dedication and hard work in efforts toward reaching our objectives.”