The Players Championship: Inside Intel’s Live VR/360-video production at No. 17

During all four rounds of The Players Championship last week, the PGA TOUR and Intel produced live virtual reality and 360-video feeds from TPC Sawgrass’s 17th-hole island green. The Intel Sports Group deployed three of its TrueVR camera pods on No. 17 at the Players Stadium Course, including a rig in the water. 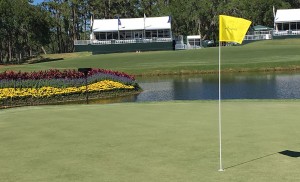 “VR is a natural medium for this course and this hole specifically because we are able to provide fans with a totally unique experience that they can’t see on TV and couldn’t see this close even if they were here at the course,” says David Aufhauser, managing director, strategy and product, Intel Sports Group. “You are able to see how the players approach this hole from both a mental and physical aspect as they walk up to the tee and try to hit this green in the middle of a lake. It’s truly a one-of-kind experience.”

The live VR experience was available on Samsung Gear VR headsets through the PGA TOUR VR Live app (on the Oculus store). In addition, the 360-video experience was streaming on Twitter and Periscope (using any smartphone). This marked the first time Twitter has distributed live 360 video during a major sports event.

Intel placed one camera on the 17th tee, one camera on the walkway from tee box to the green, and one camera in the water next to the island green. An Intel TrueVR pod comprises six stereoscopic-camera rigs (12 cameras in total), stitched together to create a single 180-degree view of the action. Intel also created a custom mount for the camera in the water and had the freedom to move its position between rounds if necessary.

“The unique part obviously is the camera in the water. We worked very closely with the Tour and NBC Sports to figure out the right positions in the water to get the best fan experience,” says Aufhauser. “During [a Wednesday practice round], a ball actually hit the camera, and the truck didn’t even know it happened. Building the camera mount so that it could withstand wind and those kinds of things was an important component.”

Intel rolled out one its TrueVR production trucks, which housed the six-person crew and handled all the encoding, processing, camera shading, camera stitching, and a production area to cut the VRCast show.

Inside the VR and 360 user experiences

The VR experience allowed users to choose between the three angles (all 180 degrees of viewing space) or a VRCast produced feed that cut between the angles. The experience also featured a virtual leaderboard, a virtual videoboard showing the ‘PGA TOUR Live: The Island Green’ linear streamed coverage (without audio) in sync with the VR feeds, and a ticker showing who is teeing off at No. 17. 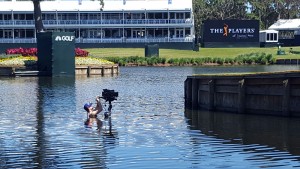 Blake Rowe, from Intel True VR, jumps in to the water at the 17th hole at the Sawgrass Open to check on the Intel True VR camera. (Credit: Intel Corporation)

before,” says Aufhauser. “The mantra that the Tour pushes is to create something that can’t be done anywhere else. I think we’ve definitely accomplished that together. For example, we work directly with the Tour on syncing the linear feed with the VR feed, which was definitely a fun challenge.”

The live 360-video experience could be accessed with any smartphone at Twitter.com/PGATOUR or @PGATOUR on Twitter and Periscope. Twitter’s first-ever live 360 sports experience also featured the virtual scoreboard of PGA TOUR Live: The Island Green linear feed with audio.

“I think, anytime you do something for the first time, there’s always a little bit of work involved to get it perfect,” Aufhauser explains. “Twitter needed to be able to ingest our video feed, and we both needed to understand exactly how it’s going to look from the user-experience perspective. On both our end and Twitter’s end, we went to great lengths to make sure the handoff is right and that all the transcoding and multi-bitrate pieces were in place. And now that that’s been done, the benefit is that it will be plug-and-play in the future.”

Looking to the Future: More sports ahead
The Players Championship marks Intel Sports Group’s latest VR effort. It follows a live production of six NCAA Men’s Basketball Tournament games (including the Final Four and Championship Game) this spring, the creation of highlights packages for four NFL games in December, a live production of BTN’s Minnesota-Nebraska college football game in November, and several others. Intel acquired VOKE VR in November, rebranding the division Intel TrueVR. Now Intel is looking to the future, with more sports properties likely getting TrueVR treatment on the horizon.

“Our focus is on being able to create and produce the highest-quality experiences for fans and doing that on behalf of our partners: PGA TOUR, CBS and Turner for the Final Four, the NFL, and more partners going forward,” says Aufhauser. “From a production perspective, we look at it holistically in terms of the production and the app experience together.

“In VR, you can’t do the production without understanding what the experience is going to be, and you can’t build the app without understanding what the video content is going to be. From graphics to data to [camera] placement — it’s all integrated. So our focus is really on continuing to push forward with new features and functionality for both production and the app experience.”