With just over ten weeks remaining until the opening of the 2018 FIFA World Cup in Russia, what was once a far-off goal on the horizon for US Spanish-language broadcaster Telemundo is suddenly bearing down on them like a speedboat.

It was in 2011 when Telemundo learned it had acquired the rights to this year’s big tournament and now the broadcaster is ready to roll with a robust production and content plan.

At an event earlier this month, Telemundo unveiled some key partnerships and shared some viewership data that has the network feeling awfully bullish headed into this summer’s tournament. 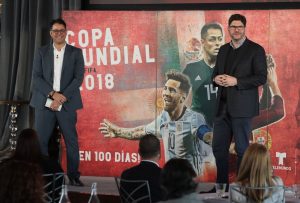 Telemundo has already established original content partnerships with VICE, the popular soccer digital destination Copa90, and the Telemundo Station Group for various content plays. Plus, the network’s Red Square-based set in the heart of Moscow promises to be a sight to behold.

The network also disclosed some viewership trends and numbers that it dug up in an exclusive partnership with Horowitz Research. Of little surprise to many, soccer resonates strongly with Americans of Hispanic and Latino heritage.

According to their data, 77% of Hispanic soccer fans plan to watch World Cup matches live on television. They also said that if they can’t catch the matches live, 46% will live stream matches. 31% even said they would stream matches  on demand if they miss the live game.

We caught up with Eli Velazquez, Executive Vice President, Programming, Production & Content at Telemundo Deportes to run through some of the upcoming plans for this summer’s massive production.

You’re obviously working very closely with some talent from NBC Sports (including noted producer Jim Bell, who will executive produce this World Cup for Telemundo) and utilising some workflows established by NBC Olympics. That includes at-home production. How do you think that might play out for an event like the World Cup, how comparable could that be to like an Olympics?

Velazquez: Our IBC position and presence will not be as massive as [NBC’s] IBC presence and position was for [the PyeongChang] Olympics. I think part of that also is because we’re covering a singular sport with specific times that won’t really move that much. They had to deal with eight or nine different sports simultaneously, so the engineering side had to deal with much more.

Having said that, we are working with Dave Mazza and his team – the guys behind the Olympic model – to make sure that our IBC position in Moscow is equipped so that we have our main control room there.

We will have an insert studio there as well. We will have full services, audio booths, engineering, and shading rooms. We are still going to be engaging with Stamford and the facility [at 30 Rock]. As it relates to transmission, we’re going to have a numerous amount of feeds coming back.

We also have our brand new, state-of-the-art facility in Miami, the Telemundo Center. I mean it’s just the monstrosity of technology we’re going to use the complete strength of assets and innovation that this company brings to bear to make sure that everything is flowing seamlessly from an engineering and a technical standpoint.

How about the set at Red Square? What kind of new technologies or innovations can we expect there?

Velazquez: Sure, so AR [augmented reality] will be a part of our coverage, for sure. We’re working with a couple of providers on that. We’re going to take on as much technological innovation as we can from that space. That’s why working with NBC sports was very important to us, because we knew that they had the expertise to bring that enhancement to our experience. We’re all part of the same company so why not take advantage.

One last question on the Red Square spot. We spoke with [Fox Sports’] David Neal and he said that it was a very laborious process making sure everything met governmental standards for their studio set in Red Square. Did you guys go through a similar process, did you have to go like present many different versions and things like that?

Velazquez: Not as much as they did because, from my understanding they’re building their own structure. We are going to be existing within the HBS’ [FIFA’s Host Broadcast Services] structure that they will have there. That allowed us to have the same experience that I’m sure [Fox] will have – perhaps more limited.

My point being that because we decided to work with HBS, they were able to help us leverage and avoid some of that bureaucracy because it was a service that they were providing. That allowed us to focus, frankly, on the look, the feel, the enhancements, to make sure that the experience is top notch. We’re not constructing that studio in Red Square to show off what we’re doing to the people in Russia. We’re constructing it in Red Square to show off to the people back home.

HBS has the matches covered. What’s the relationship like for you with them and what can you do, if anything, to add your own flair to match coverage?

Velazquez: There are unilateral services that you can book depending on the match in question. So I think as the storylines develop within the group stage and we see  which team’s really taking off, whether or not our relevant teams are playing a big match – like the one against Mexico and Germany – we’ll make requests.

We have the ability to call on them for unilateral services that will allow us to provide additional cameras and, if we so choose, to then create some more customisation around the experience. Having said that, we believe they do an amazing job as it is covering the game. Since they do such a great job, we’re going to take a wait-and-see approach on that and decide whether or not the juice is worth the squeeze.