The sun also rises: the continued ascendancy of Sunset+Vine (part one) 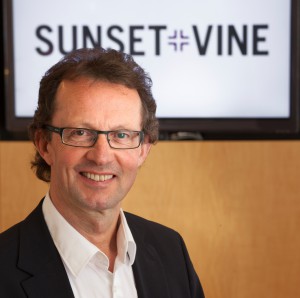 As independent sports programming supplier Sunset+Vine marks its thirtieth anniversary, the company is also on the verge of its most exciting phase yet with an historic, long-term contract with BT Sport occasioning a massive expansion of resources and workforce. In the first of a two-part feature, chairman Jeff Foulser speaks to David Davies about key turning points, the background to the BT Sport deal, and the challenges ahead.

Among other achievements, the last 12 months have seen Sunset+Vine be named production partner for the new BT Sport channels, and be confirmed as host broadcaster for the Glasgow Commonwealth Games 2014, so it would be fair to say that the company’s profile is now at an all-time high?

I think it probably is, and it’s really down to a combination of things that have happened over the last year. Almost exactly a year ago, we were embarking upon Paralympics coverage for Channel 4 in conjunction with IMG, and there is no doubt that that project raised our profile. Winning the Glasgow contract was also very significant; we had never any host broadcast work before, so it’s really taking us into a new area. Then, of course, the BT Sport contract has been absolutely massive for us. To come from where we were five months ago, with a shell in the Olympic Park, to one of the most sophisticated studio and editing set-ups in the whole of Europe is just extraordinary. BT built the studios itself and has really invested very heavily in the whole project, so it’s a great privilege – and a huge task! – that we have been entrusted with handling their major productions for Premier League football, Premiership Rugby and Middle European football.

More on the BT contract anon, but looking back what would you say were the key turning points in the company’s development over the preceding three decades?

The first one would probably be 1996, when we won a contract with the then-new Channel 5 to do a late night sports show called Live & Dangerous. It was six hours a night, six days a week; full of American sports and chat. We brought together a team of fairly inexperienced producers, many of whom have gone on to do great things with us and other companies. The whole experience gave us a brilliant foundation for everything we did after then… it really set us off.

Subsequent to that, winning the Channel 4 International Cricket contract in 1999 was extremely important in terms of raising our overall profile. Channel 4 put a lot of money behind its coverage, and made it possible to invest in innovations that really transformed the game – most obviously HawkEye, in which we invested more than a £million of our money. C4 used it, then Sky, and so on. You really could say the rest is history and it’s become such a part of the production of cricket and tennis.

The BT Sport production contract is for three years, with an option to extend to four. But how did you approach the tender, and what were your thoughts on landing the contract?

For a start, the whole project was a surprise as I don’t think anyone in the industry saw BT coming along in terms of being a content owner. Not being a broadcaster, they had to put a team in place pretty quickly that could get this stuff on air. I suppose they could have done it themselves, but it would have been a massive task, so they put it out to tender, which for us came at an interesting time. We had just come off the back of losing the contract for horse-racing [when rights transferred from the BBC to C4], and that was a massive blow for us. Plus, we were about to go into the Paralympics, so actually having the necessary people around to put a credible tender together was a bit of a challenge! But eventually we found a way to do it and compiled something that we were happy with, and felt contained some really fun and informative programme ideas.

We found out just before Christmas 2012. You have good and bad days in this industry, and that was absolutely one of the best. Suffice to say, the office emptied pretty quickly into the pub over the road…!

How clear was BT’s vision for sport at the start of the project?

They clearly had their own thoughts, and had put together a team of their own to work on the project, including a very creative executive producer in Grant Best. What’s resulted is a combination of everyone’s ideas and creativity; it’s a real partnership.

The first major test comes with the Premier League coverage later this month, but we did do seven OBs over the first weekend – logistically and technically a big task – so I think we hit the ground running. My main objective for now is that people will be able to look at the coverage of the Premier League and say it compares favourably with what’s out there. I certainly don’t want to say we will be better than Sky as they have done an unbelievable job and have set the bar very high.