Thought Leadership: Decisions on the transition timeline for broadcast infrastructure

For the last few years, much of the tech talk in our industry has centred around two letters — IP. In truth, writes Imagine Communications COO Glodina Lostanlen, IP connectivity is just an enabling technology: the goal is a software-defined architecture, running on standard, commercial off-the-shelf (COTS) hardware. COTS hardware that inherently talks IP over ethernet.

Live production was always going to be the biggest challenge for IP-connected software systems. But once the industry’s realtime performance issues were resolved, the powerful benefits became clear.

If we turn away from the technology for the moment, what are the real drivers in live production, and particularly sports? What is it that audiences crave?

First, sports viewers want to be engaged; they want to understand what is happening. So they need multiple cameras: 30 cameras on a field sport like football or cricket is the new norm.

In more demanding sports, the sky is the limit. For example, the recent Open golf tournament at Royal Portrush used a staggering 175 cameras for the multilateral feed.

Second, viewers cannot get enough detail. Sports fans are actively driving the move to Ultra HD in its varied forms. It gives producers the flexibility to zoom into a scene for clarification, too. And Ultra HD is only the next step — even higher resolutions like 8K are already being tested.

Third, they want it now. Wherever they are. You have to deliver to mobiles for that part of the audience that cannot sit in front of a television at the key time. And you have to minimise the latency between feeds. Nothing will enrage a sports fan more than hearing someone else cheer and have to wait to find out why.

Given that most major sports events are still produced from an outside broadcast truck (or a compound of them), then all the expectations of production quality today — high resolution, large numbers of cameras, multiple outputs without compromising quality, etc. — must be delivered using architecture that fits within the size and weight limits of a truck.

The simple answer is that this is not possible without moving to software-defined functionality and IP connectivity. Traditional hardware would take up too much space, too much weight and too much power. This is the unstoppable driver for IP and software.

By designing smart microservices, you can achieve remarkable power, for instance by using the GPU for advanced processing. That enables you to deliver HDR and 4K – even 8K – today.

An IP-based infrastructure is agnostic with respect to video formats, so that an investment in IP today will also support the next generations of video formats.

On the other hand, production companies have investments in existing technology and a budget which reflects the realities of today’s business. Even if it were financially viable — which it rarely is — there would be environmental concerns about wholesale, forklift replacement of major systems not yet life expired.

Imagine Communications is leading the curve on standardisation for IP connectivity — the document editor for SMPTE ST 2110 was John Mailhot, one of our senior engineering team. And while we have stable, standards-based IP solutions proven in the field, not all vendors can make the same claim.

The conclusion is that there is no one-size-fits-all, big bang approach. Budgets and technology mean there must be a transition from SDI and bespoke hardware to IP and virtualised software. The shape and timescale of that transition is, ultimately, down to you. You have to pick your own route and pace. 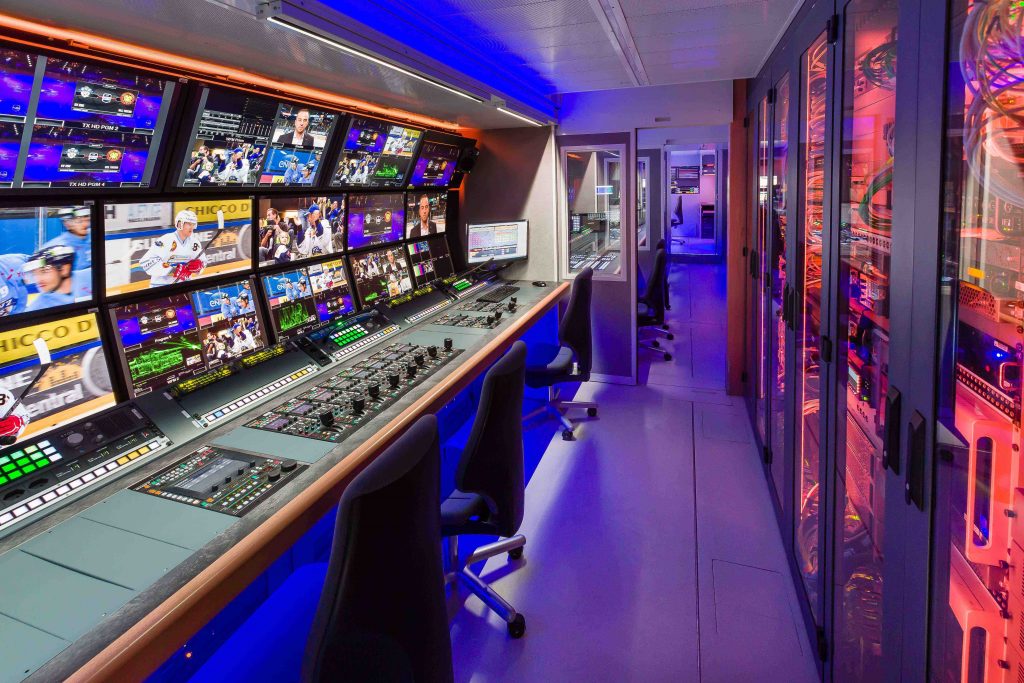 Some of the chosen devices – like the cameras and servers – still talk SDI, but all the interfaces required could be provided in a single rack of Imagine Selenio Network Processors (SNP). The UHD1 truck is now in constant service, covering everything from the 2019 Wengen Lauberhorn, the most exciting of the FIS World Cup ski races, to Nabucco from Zurich Opera House.

Across the mountains in Italy, Global Production also needed Ultra HD in a truck now. The solution was a standards-based, hybrid architecture designed by systems integrator Chromaline with SNP at the core.

One of Global Production’s key customers is Ferrari and its Ferrari Challenge World Final. Ferrari wanted to check that every output, from Ultra HD to mobile, reproduced its trademark red accurately. Thanks to the well-engineered video processing in the SNP, Global Production were able to achieve this for Ferrari.

There are many other examples of production facilities taking the pragmatic view. The clear need is to move to IP connectivity and software systems. Open standards are vital in this, to allow users to make their own best-of-breed decisions: no one wants to get locked into any single-vendor solution.

But that might mean you need to put some technology further down the timeline until the vendor demonstrates full standards conformation. We are now seeing IP conformance events, like the JT-NM Tested Program, which has now held its first two open testing sessions.

So decisions on the transition timeline are very individual. There really is no right way.

We have helped customers build out from an SDI core as individual functions need replacing. Our Platinum IP3 router, for example, switches digital audio, digital video and IP streams in the same frame. The system becomes hybrid — at your pace — with a single orchestration layer such as the Magellan SDN Orchestrator providing unified control.

Of course, there are greenfield sites which can go straight to IP routing and networking. But the chances are that, like tpc’s UHD1 truck, you will still need to interface to SDI for delivery and edge devices, and you need an architecture that will minimise latency.

My final piece of advice for you when determining your transition path and pace is to remember the fundamentals of broadcasting. Operationally we can make it feel very familiar with little or no retraining required, but under the hood some aspects, like synchronisation, need a different approach.

The important thing to remember is that you are still building a broadcast infrastructure, and so it must have the core values we have grown to expect, of which the most important is resilience. You really cannot ask the players of the Super Bowl or the Euro 2020 to hang on for five minutes while you reboot a router.

Plan your transition to deliver quality, efficiency, reliability and a familiar operational experience, every step of the way.