Thought Leadership: Time to level the playing field for people of colour in sports broadcast

Representation of black, Asian and minority ethnic (BAME) athletes in sport today is strong. It is estimated that up to 30% of professional footballers in the English professional leagues are black, while in professional boxing and athletics, the figures are even higher. However, this diversity is not reflected in the sports media.

According to the Black Collective of Media Specialists (BCOMS), only eight of the 456 roles covering summer events in 2016 went to black journalists who have not played sport professionally, and only two BAME sports journalists went to Euro 2016 out of a total of 51 newspaper roles.

Leon Mann, founder of BCOMS, founder of the Football Black List, as well as being a filmmaker, director, reporter and presenter, comments: “There is a high engagement and interest from the black community in sport in the UK, therefore when you look at how that’s represented on TV, you’d expect to see a higher representation of black people because of the nature of the sports athletes and the fans.” 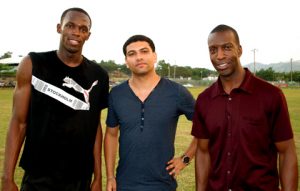 Bolt, Leon Mann and Michael Johnson, pictured together when Mann was directing the two athletes and presenters for a BBC1, BBC2 and BBC3 sports documentary

This situation has remained unchanged for decades, Mann says: “As a youngster in the 1980s I didn’t ever have a true belief I would work on TV to be a reporter, because I didn’t see anyone black on TV [working as a sports reporter or presenter] that hadn’t won an Olympic medal. Today on screen we have Thierry Henry, Denise Lewis, and Michael Johnson; these are people that get the opportunities on screen, because of their sporting careers.”

Talking about BAME representation at the upcoming World Cup, Mann comments: “If you look at the BBC and ITV, coverage will look diverse, but who of the BAME people on screen [reporting and presenting] at the World Cup will not have played sport at the very highest level? Those are the questions you need to ask both on screen, and off screen.”

He states that there are non-BAME reporters and presenters who have not had professional sporting backgrounds, but not vice-versa: “I don’t mind professional athletes interviewing, but that can’t be the case only for BAME people. The industry needs to be careful of that; if that’s the route we’re still going in, what does that say to the next generation of BAME people who haven’t had a sporting career and are wondering if they could have that job?”

According to Ofcom’s Diversity and equal opportunities in television – UK-based television industry [September 2017], 11% of employees across the UK-based industry are from an ethnic minority background, and 70% are white. In the UK TV industry that 11% total of BAME employees is also lower than the UK average figure of 14%, and significantly below the proportion of people from an ethnic minority background in London (40%) where many broadcasters have their main offices.

The Ofcom study also stated that ethnic minority representation is much lower than the UK average population of 14% at senior employment levels, comprising of just 8% of senior management roles, and 12% of middle and junior management roles (where 75% of employees are white). Across technical and engineering roles, ethnic minority representation was in line with the UK average at 14%.

The highest areas of disparity are behind the camera says Mann. “Over my career I have never worked with any black picture editors or studio directors, and just one programme editor, and I have worked on hundreds of programmes. That one programme editor is now head of sport at Channel 4 [Stephen Lyle], so in terms of that person being exceptional, they are; they have gone on to get a top, top job. The question is how exceptional do you need to be as a black person to get a job? I have worked with so many unexceptional editors who aren’t black, who get jobs all the time.”

Meanwhile, Directors UK conducted detailed research into black, Asian and minority ethnic (BAME) directors and their prevalence in the British film and TV scene in 2015. The study, UK Television: Adjusting the Colour Balance, revealed the embarrassing statistic that only 1.5% of UK television is made by a BAME director. It also found that the proportion of TV made by BAME directors in 2013 (1.29%) had dropped by over 20% in comparison with pre-2011 programmes (1.67%).

Not only are BAME directors under-represented and under-employed in UK TV as a whole, but they are being given a far smaller proportion of directing opportunities in many key programming genres. The report stated that, “some of the most popular drama, comedy and entertainment shows had never been directed by a director who is of black, Asian or minority ethnic background – including all programmes within our sample from the following genres: period drama, chat show, game show, performance, reality, panel show, sketch comedy, and children’s comedy and entertainment”.

Middle management must be the driver of change, states Mann, but at the moment middle management is sustaining the issue. He explains: “As the founder of BCOMS I meet most of the senior people in broadcast and sport broadcast, and the top level people understand the diversity issue and I feel what they would like to see is certainly on-point, but the real change needs to come from middle management. Middle management is… doing what has been done before, just getting the job done. But they must also deliver a more diverse product, not just on screen, and that’s the bigger challenge; to make a better product you need wholesale diversity, not just window dressing.”

He continues: “In those meetings about what the story should look like, the only BAME voices around the table are the black reporters on screen; outside of that, the black producers, directors and production staff aren’t there because they aren’t in those roles. More diverse teams will result in better programming that is more reflective of the UK.”

Research titled, 2018 Workforce Diversity in the UK Screen Sector, [CAMEo Research Institute for Cultural and Media Economies, University of Leicester], notes: “Within the screen sector there is a strong perception that barriers to greater workforce diversity are a ‘lost opportunity’, for companies, for creative teams, and for audiences,” and it goes on, “but we do not articulate well enough precisely what benefits greater workforce diversity might bring”.

Those benefits are the key to understanding why the sports broadcast industry, and the broadcast industry as a whole, needs to become more diverse, both on and off screen. More voices from more cultural perspectives brings greater creativity as well as greater understanding of the audience. Mann says: “Our industry can be quite archaic despite all the technological advancements. When we think about diversity, people think it’s the right thing to do, but what’s needed is actually the same attitude as going digital; it’s for the good of everything. It will revolutionise our industry and ensure our survival.

“Diversity will help us understand our audience better, including age, disability and social diversity. There needs to be an attitudinal shift towards diversity to really make a big difference. We are so behind the game right now that we have a lot of catching up to do. There needs to be the will to do good, but also the business approach to deliver it,” concludes Mann.