Three Networks Share a House and Resources at Roland Garros 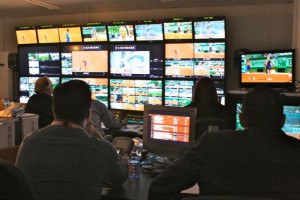 For U.S. viewers, the French Open can be found on three networks: Tennis Channel, ESPN, and NBC Sports. On the grounds of Roland Garros, all three of those networks can be found under one roof, that of a three-story building housing two master-control rooms, Avid edit suites, audio rooms, and more.

“It’s one common engine room with the ability through EVS, playback, and ingest to share common content from the world feed,” says Jamie Reynolds, ESPN vice president, event production. “And whether you are on the right side of the facility, where Tennis Channel is, or the left side, where ESPN is, either of our networks can tape for air or live to air while sharing agnostic content.”

The French Open continues to be an example of how U.S. broadcast networks work together and share resources in an effort to streamline costs, give consistency to the productions, and keep a sharp focus on storytelling rather than duplicating work.

At the core of the efforts is kit provided by Presteigne Charter, which has supplied such kits for Tennis Channel, ESPN, and ESPN International for six years. The ground floor contains the EVS “engine room,” which pulls in up to 57 feeds, including clean and dirty signals from each court. Sam Olsen, Presteigne Charter, senior project engineer, enumerates the EVS complement on hand: 18 XT and two XL servers, six XFile gateways, and 22 IP Director production-management systems.

“The XFiles are used less and less and next year,” he notes. “The goal is to have a big pipe instead.”

Olsen and the rigging team turned up on 9 May for four days of cabling and furniture assembly, with 11 km of cable laid during initial setup. On 14 May, the remainder of the engineering crew was on-site.

The EVS server sits in among all the U.S. broadcasters and is shared by editors and producers using Avid editing systems to access low-res proxies for clip assembly.

Both Tennis Channel and ESPN have their own master-control room, and there is an additional one for Tennis Channel’s French Open Tonight.

ESPN also has an ESPN International control room, an Orad graphics suite, and each network has its own Avid editing suite.

Another common asset is a shared set that can be rebranded to reflect the network using it.

The biggest change this year has less to do with technology and more to do with broadcast windows. For the first time since 2006, ESPN is on-air with the early sessions, which begin at 11 a.m. local time, and Tennis Channel begins broadcasting at 4 p.m.

But it’s during those exclusive windows when the benefits of the centralised storage system become apparent. If something happens while the Tennis Channel is on-air, for example, ESPN is able to build highlights and offer instant analysis.

ESPN’s coverage of the French Open also provides an opportunity for the network to refine its coverage of Wimbledon, which, for the first time ever, will be an all-ESPN affair for viewers in the U.S.

“It’s a 3D chess board to finish this event and maintain the storytelling of the French Open while spending every free moment working on Wimbledon,” adds Reynolds. “Our freelance staff and technical group can riff ideas off of each other. The negative is, we have a finite calendar and it’s a little bit harder with things like the Diamond Jubilee that are keeping those involved in scenic design and photographers busy and then finding someone who isn’t committed to an Olympics initiative.”