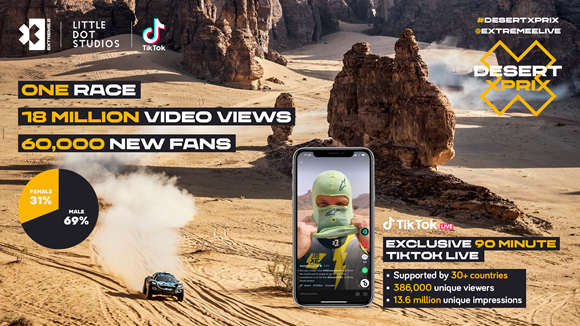 Extreme E has announced that its content received 18.5 million organic views across TikTok for its inaugural X Prix in the Saudi Arabian desert.

As part of the ambitious partnership, Extreme E and Little Dot Studios created an exclusive 90 minute production, which aired on Extreme E’s TikTok account on Saturday 3 April. More than 386,000 people watched the show, which gave a behind the scenes look at the series and the personalities at the heart of it.

Ali Russell, chief marketing officer at Extreme E, said: “These numbers are phenomenal and I’m thrilled that in our first weekend we were able to reach so many people with our unique sport for purpose.

“As part of the championship’s mission to keep carbon emissions to a minimum we don’t have spectators on site, and if we did, we would never reach this level of engagement purely from attendees. It just goes to show how important our digital offering is.

“A massive thank you to TikTok, Little Dot Studios and our in-house social team, these numbers are awesome and a testament to the engaging and innovative motorsport series we have created.”

It is not surprising that one of the most popular videos was ‘The Drop’; a part of the course measuring 100 metres with a 45 degree descent, which left viewers with their hearts in their mouths. The on board video gave a view from the cockpit and 3.8 million fans tuned in to see exactly what the driver saw as they took on this challenging element of the course.

The partnership with TikTok covers all five of Extreme E’s X Prixs in 2021, so there is certainly more to come when the series visits Senegal for its second event from 29 to 30 May.