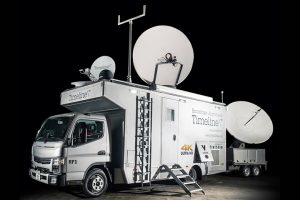 Timeline Television is building a second Ultra High Definition (UHD) RF uplink truck that it will launch later this year.

The five tonne RF2 is being designed and built in-house by Timeline Television and will feature a dual chain 1.8m Advent Newswift antenna.

A one metre Cobham Explorer 8100 KA antenna for remote data services and video over IP will also be included along with a 196 bidirectional port Vega router.

RF1 (pictured), Timeline’s first 4K uplink truck, was launched in December 2016. It completed more than 80 outside broadcasts in its first year of operation, the company said.

Timeline added that “as well as being a traditional RF uplink truck, RF2 has been designed to be flexible and completely customisable to client needs.”