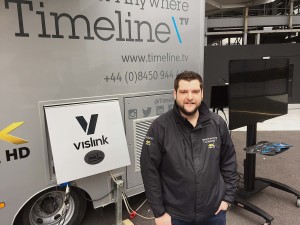 Lee Wright: “I don’t think anyone else is doing a UHD scanner and an uplink in a size like this”

Timeline TV has augmented its Ultra HD fleet with a compact new uplinks truck, RF1, that is also designed to act as a mini OB truck capable of taking in up to six cabled or wireless UHD cameras. The 7.5 tonne unit has enough room in the production area for eight people, and it will be used “for five or six-camera UHD OBs in tight locations,” explained Martin Bailey, Timeline TV’s Head of Outside Broadcasting.

“The truck is ideal for outside broadcasts in cities and remote locations because it is compact, and broadcasters can still shoot their shows in UHD if they wish to,” he added.

The truck has a 2.4m Advent NewSwift Ku antenna with a redundant transmission chain and two 750W amplifiers, “which gives us quite a lot of gain, so we don’t have to worry about the weather so much. It’s quite a sturdy platform as well,” said Timeline TV senior broadcast engineer, Lee Wright (an uplink specialist who helped design the truck). 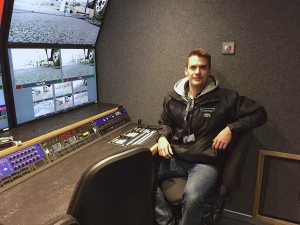 It has seven Vislink modulators that can also do MPEG4 or MPEG2 encoding. Four of these are ultra encoders that can also do H.265, for UHD output. There are also five HD Vislink integrated receiver decoders, two Ericsson 8200 IRDs and three Vislink UHD H.265 decoders, as well as a DSat off-air auto-seeking dish.

There is also a 1m Ka antenna on the front of the truck, for IP. “That enables it to get an up-to-10Mbps internet circuit (each way). We could also do video over that,” although there has been no need to do that in the short time the truck has been in use, added Wright.

The truck also offers four fully duplex talkback channels, plus two or four audio-over-IP encoders from Comrex, allowing it to do up to eight four-wire connections over the dish.

“I don’t think anyone else is doing a UHD scanner and an uplink in a size like this,” said Wright, who believes that RF1 is one of the first, and possibly the first, in Europe. RF1 is also equipped with the first Vislink units for wireless UHD cameras, which Timeline has been beta testing. They offer an encoding delay of just 165 milliseconds: “And that’s CBR as well. It’s quite impressive,” said Wright. “There is no-one else on the market at the moment who can provide what we need in terms of wireless UHD encoding,” added Bailey. The truck has a rooftop mounted 12m mast for the wireless camera system. 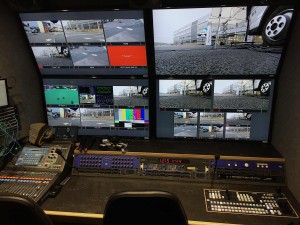 To make it even more flexible, there is a trailer which has a 2.4m Mantis fly-away dish, connecting to RF1 over fibre, “so we can remotely site it, and that has dual 400W amplifiers on it, so it is fairly powerful. It gives us dual-redundancy out, and together with all the modulators we’ve got here, we can do quite a few circuits out. This can act as a mini-MCR on the road,” explained Wright.

It would be ideal for a stadium like Wembley where the OB park is underground, so the trailer could be parked in the sat-com area and linked via fibre. “It has all the same monitoring as the main dish. It all integrates together, so you can mix and match your transmission paths to whichever antenna you want,” he added.

The truck takes two 63A single phase external mains inputs, but can also act as a stand-alone unit, with its own 25 kVA on-board generator, which can power the truck facilities and both dishes for 12 hours from the vehicle fuel tank. There is also a UPS to give 30 minutes of cover if the generator stops, or during a changeover from external power to the generator.

RF1 was primarily built as an uplink truck, to work with UHD1, Timeline’s 16-camera UHD truck, “but then we decided that actually we could go a bit further and add a production element,” said Quinn Cowper, lead engineer, outside broadcasts, Timeline TV. The truck can be run in HD or UHD. “In HD mode you gain a lot more resources,” so, for example, its SAM Kula desk has a single M/E in UHD, but 2M/E in HD — although a further bank can be added. It also has two keyers. 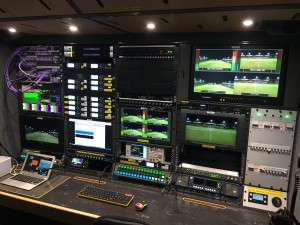 Inside RF1: The technical side of the operation

Timeline chose the Kula vision mixer because “it is aimed at trucks needing a smaller switcher” and “we’ve always had a really good partnership with SAM,” said Cowper, and as the Kahuna has become standard in the OB market for UHD and the Kula “has all the capabilities that a full-size Kahuna has got in a 2U frame and it’s small enough for a truck of this size, so it’s the perfect little combination.”

It also has an Imagine Communications 128×128 UHD/HD SX matrix with built-in multiviewers. “We needed something very compact and that gave us the answer to that,” said Cowper. It uses an Axon Cerebrum control system that “we use across all of our trucks, which you can completely customise to your choice,” making it very simple to alter the layout of the multiviewers, for example, or control the encoders.

The truck can have up to six Sony RCPs, and is currently wired for four Sony 4300 CCU/BPU and six radio cameras with remote racking, with an RF over fibre system for wireless camera reception. It has a monitor wall of four 49-inch Panasonic Viera UHD monitors, as well as Sony monitors for the technical area, plus a Lilliput UHD monitor (although not a grade one monitor, there is a grade one monitor for controlling the cameras in the engineering position). There’s also a Tektronix 8300 UHD waveform monitor, AJA FS4 frame synchronisers and up/down/cross-converters, and an AJA Ki Pro UHD recorder.

There is an EVS with 8-in/4-out in HD or 2-in/1-out in UHD. “There is space inside for one EVS operator, but if you wanted more, it comes with a 12-channel EVS Channel Max XT3, but it also has a trailer that can carry equipment but can then house VT or graphics, if you want more space,” added Bailey. 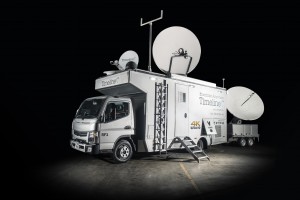 Timeline used Steve Wright Engineering, based in Colchester, for the coachbuilding. Although it hadn’t used them before, Cowper said he was impressed with the quality. The 7m-long unit is 2.4m wide and 3.7m high with the main antenna stowed. It also has two electronic awnings.