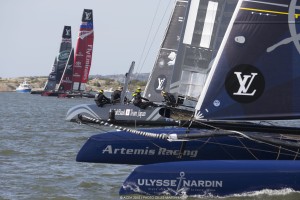 Timeline Television has collaborated with Marine Camera Solutions to develop a bespoke system to capture the Louis Vuitton America’s Cup World Series, the first stage of the competition in the 35th America’s Cup. The America’s Cup features the best sailors in the world competing on foiling, wing-sailed 45ft catamarans.

To capture first class viewing of the action live from the competing yachts, Timeline Television and Marine Camera Solutions developed bespoke robotic, three axis, waterproof camera systems and a live feed linked to the shore by an RF network. These images of the action on the water form the core of the coverage that is watched by a global TV audience and on the big screen at the events.

Marine Camera Solutions incorporated a number of unique features in the new cameras to allow the highest possible performance in this marine environment. These include the waterproofing components, the wiper blade system and the outer glass.

The cameras are very susceptible to spray and water droplets on the screen. Rather than having one wiper blade externally on the camera, the camera itself drives through a static blade cleaning the screen of any water droplets. A further innovative feature involves the sapphire crystal lenses. These have been treated with a revolutionary Nano-ceramic coating across the surface, which provides a super hydrophobic barrier to repel water away from the lens.

Timeline’s system architecture means that the cameras can be operated remotely from inside the TV production truck and controlled over an IP network. Timeline’s technical team has written control software to optimise the weight and feel of the camera controls to give a responsive but smooth movement in pan, tilt, zoom and roll.

Two cameras from each boat are RF linked from the yacht’s masthead to an antenna array on shore. Timeline’s RF Control point manages the link performance from each yacht along with signals from helicopter cameras and a chase boat. 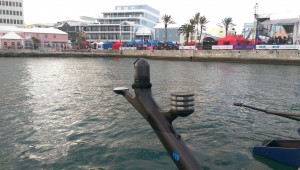 “We are privileged to be providing this vital element to the TV coverage of the 35th Americas Cup. The best in class on-board cameras ensure that viewers get the best possible image and experience of the Louis Vuitton America’s Cup World Series racing as if they were part of the crew. We are delighted to be working with America’s Cup Television (ACTV) and Marine Camera Solutions using our strengths in RF, data and camera technology to provide thrilling, live on-board pictures from the racing yachts,“ said Dan McDonnell, MD of Timeline Television Ltd.

The Louis Vuitton America’s Cup World Series commenced in 2015 with racing taking place in Portsmouth, UK, Gothenburg, Sweden and Bermuda. In 2016, racing took place in Muscat, Oman (27-28 February) before shifting to New York, USA in May, Chicago, USA in June, Portsmouth, UK in July and Toulon, France in September. The America’s Cup competition will be hosted in Bermuda in May/June 2017.

Regarding the most recent World Series races, Timeline TV Project Manager Simon Fell said, “while the sunshine and heat of Oman were a welcome change for the crew, the conditions could have proved challenging for Timeline’s live on-board yacht camera equipment. However, the systems coped beautifully, again producing stunning images from the heart of the AC45 action. It’s also worth mentioning that there are no cabled cameras on the event. Timeline provide the RF links for all camera sources — 12 yachts cameras, the chase boat, helicopter and on-shore radio camera.”