Of all the types of programming an OB company finds itself doing, one of the more unusual, and challenging, is a flower show – particularly the Royal Horticultural Society’s Chelsea Flower Show, one of the BBC’s biggest annual OBs.

Timeline Television took over the OB contract for the May 22-26 show this year and provided all of the facilities, where previous OB providers typically brought in other companies to look after RF, talkback and edit systems. “We’ve got a wide range of skills, we can actually handle everything in-house,” said Martin Sexton, Timeline TV’s Unit Manager. It did hire in some equipment, due to the concurrent demands of FA Cup finals and other events, but all the personnel were its own staff or directly-employed freelancers.

The BBC produced about 14 hours of television covering more than a week of programming, with up to three magazine-type shows per day, with live or as-live links. It wasn’t possible to do everything totally live, due to the difficulty in moving the crews and equipment around the site during a programme, so it was generally two or three live items and the rest either packages or as-live links. 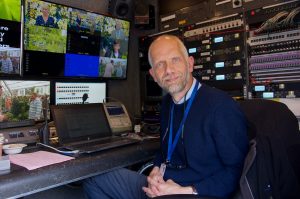 “It is very unusual to do a studio show in an OB environment, which is what we’re doing here,” added Simon Fell, Timeline TV Project Manager, who was working as the RF Supervisor on the Chelsea Flower Show.

There was a three-camera open-air studio, overlooking the show grounds, two other multi-camera teams, plus 10 PSC crews shooting recorded items. There were also seven edit suites, plus two compile edits, all on Avid, with the compiles recorded to three EVS machines for playing in to the programmes.

Although Timeline was using its UHD2 truck, it was an HD 1080/50i production. “However, we are using UHD cameras, which has upped the video quality significantly over previous years. Both the production and engineering side from the BBC are very happy with the new quality,” said Sexton.

“There was no point in doing UHD just to down-convert, because the conversion processes 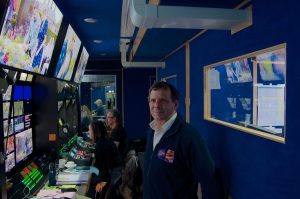 themselves put in various artefacts,” he added. It was the first year of a four-year contract, and because the truck is capable of UHD, there is the possibility of shooting UHD in the future, particularly for archive material, and, probably more importantly, in HDR.

Timeline usually has a large EVS area in UHD2, with two rows of EVS operations, but for Chelsea it replaced the back row with two edit suites. “It was decided that the two compile edits would be best in the truck, so they would be close to the main production team, so they could just wander in and have a conversation rather than having to wander out to a Portakabin,” explained Sexton.

All the edit suites feed in to a small server room. Normally it would have used the servers in the truck, as it has the equipment, but as the truck had to leave within two hours following the last Friday show, to go to Moscow, it was more sensible to build a separate room as there was also a show on Saturday. That was edited in one of the Avid suites, including any links or reports done on the day, and played out from a HDCam SR recording and playout system in its new RF3 dedicated RF and uplink vehicle. 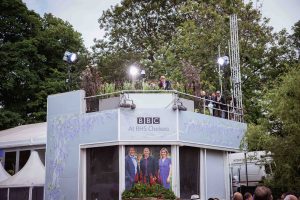 The area in UHD2 at the back of the usual EVS area was refitted as two full edit areas, “but it’s been built by Smiths so it is extremely high quality, and it can either be run as one large room, two small rooms, or one small room with the rest of the area still as EVS. Each area is sound-proofed, so each can work entirely separately. It can also be used as a separate production area, with sound and vision galleries. It gives a lot more flexibility to the truck, in what is at times an under-used area.”

The temporary area is extremely well finished, and looks permanent although it could be de-rigged in an hour (as it had to be before UHD2 left on its way to Russia for the World Cup).

There was also a dedicated talkback cabin to deal with all the radios, with 90 hand-held units being used by all the teams at the event, working over eight talkback channels – mainly a mixture of Tait Communications base stations (“They’re very good,” said Sexton) and Motorola handsets.

Besides the nine edit stations, there were also three ingest points, to take in material from the various PSC crews. “They pretty much look after themselves on the PSC side,” which is all organised direct by the BBC.

The edit Portakabins are all close to the main truck, in the small compound. “If there is anything that is tricky here it is actually the size of the compound and the narrow, steep access to it,” he added.

“It is quite a large site to cover in RF terms. The RF team has had quite a difficult job to make sure to get antennas in the right place,” said Sexton. Because of the huge numbers of visitors milling around every garden and exhibit, they weren’t allowed to run cables in any public areas in case they became trip hazards.

Central to this was RF3, working on its first ever production. This “compact and efficient unit” is 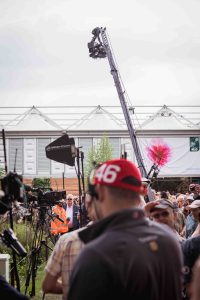 identical to RF2 (which made its debut for the Royal wedding), and both differ from its larger RF1, which is a mixed UHD production truck.

The newly-built truck came straight to site from its acceptance testing (having been built by Neil Wilson, with integration in house by Lee Wright, Timeline’s senior satellite engineer), and then went on this week to BBC’s Springwatch. “This event [Chelsea] is unusual in that it is so dominated by radio cameras. We do other shows that are dominated by radio cameras, such as the America’s Cup, or any other sailing event, where almost all of the coverage is on radio, but for a show like this, that is on land, it is quite unusual for what is a studio-based magazine show to use almost entirely radio cameras for a majority of the coverage,” said Fell.

Although it used a “fairly standard wireless set up” this year, said Fell, “we hope to shortly move to use H.265 coding to improve picture quality here. We did trial it very briefly, and hopefully next year we will implement H.265 here. But, otherwise, it is a fairly standard radio camera set up. Because of the size of the site we have several remote receive sites connected on fibre optic, which operate via a combination of MRC switching in the receivers and also via RF matrix switching, so that we can make sure we can get the best possible signals in to the receivers from the different sites that the teams go to.”

There are two main camera teams, with three cameras in one and two cameras in the other, “and we take radio signals from all the cameras individually, but also feed back to the teams feeds of Autocue and reverse vision via radio link, which is split out to the members of each team (including the sound crew),” said Fell.

The RF kit was augmented by full camera control via Videosys, using OEM remote control panels. “That is a pretty good level of control for the vision operators in the scanner. It is a very good system. We can control four cameras on each system set up, so here we’re running two systems to control all the cameras,” he explained.

It used Sony PXW-Z450 UHD cameras (mainly with Fujinon wide-angle lenses). Although the production at Chelsea was in HD, the quality of the UHD cameras has been noticeable. “The picture quality has been really, really good from the 450s. Everybody has noticed how sharp and bright the images are. Very, very good quality. Even using the same transmitter infrastructure that we’ve used previously, the picture quality has taken a step up by using the 450s, so we’ve been very pleased with them,” said Fell.

On the uplink side, the truck included: Vislink 5100 exciters, decoder/modulators, with output through dual redundant Zycom 400W amplifiers in to an Advent Newswift 1.8m Ku-band antenna (a second 2.4m antenna can be towed to provide dual antenna redundancy with its own dual redundant 400W amplifiers). RF3 also has a Ka antenna for remote data/video over IP, plus full UPS backup.