Timeline UHD2: showcase at MediaCityUK event ahead of SportTech session 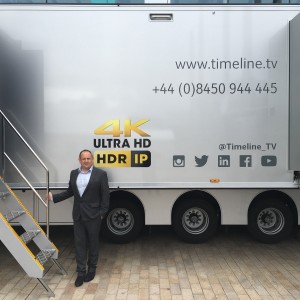 On Tuesday 16 May Timeline Television formally introduced its new UHD2 truck as part of an OB showcase held on the MediaCityUK Piazza in Salford. The innovative triple-expanding truck has been designed to deliver large-scale complex OBs simultaneously in uncompressed 4K UHD HDR and 4K UHD SDR.

Based around the SMPTE 2110 standard that enables both audio and video to be processed in the IP stream, the truck’s IP-based infrastructure eradicates the traditional SDI matrix limits and allows full optimisation of UHD 4K. With an Arista 100G switch and SAM IP infrastructure at its heart, UHD2 also accommodates: 32-cabled Sony 4300 cameras; 12 video servers (1080i, 1080p or UHD); and production in UHD HDR, UHD SDR, 1080p HDR, 1080p SDR, 1080i; and a Calrec Apollo 56-fader mix.

On a tour of the new truck, Timeline Television managing director Dan McDonnell highlighted a few of the specification highlights to SVG Europe. “The first thing to note about the truck is that where the traditional video matrix would be, there is no video matrix; instead it is all IP-based,” he said.”Each port is a 100G port and there is the opportunity to switch a huge amount of data – namely 35Gb/s. It really allows us to get over the physical model of matrix design and maximise the possibilities of a 4K SDI truck. The way this is configured it effectively comprises a 2000-squared video matrix; if we attempted to do that in SDI it would fill two huge bays with equipment.”

The IP-based infrastructure will be among the many innovations discussed during a special session about UHD2 taking place as part of SVG Europe’s SportTech 2017 summit. The event will be held at the Emirates Stadium, London, on 7 June. 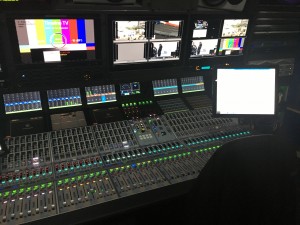 The Calrec Apollo 56-fader console inside the new UHD2 truck.

Demand for places at SportTech has been very strong, so anyone wishing to attend is advised to register now at https://www.svgeurope.org/sport-tech-europe-2017/registration-page/. The closing date for registrations is 2 June.

Back at MediaCityUK, Timeline also took the opportunity to showcase another recent addition to its Ultra HD fleet in the form of a compact new uplinks truck, RF1. Also designed to act as a mini-OB truck capable of taking in up to six cabled or wireless UHD cameras, the 7.5 tonne unit has sufficient room in the production area for eight people.