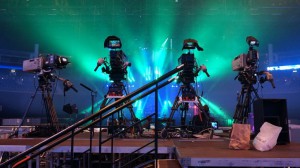 TopVision has successfully accomplished the 4K live production and transmission of a Linkin Park concert in Berlin using the latest production technology from Sony. On 19 November, managing director Achim Jendges and his team set a benchmark with the first live 4K broadcast of a concert by nu metal band Linkin Park. A total of eleven Sony PMW-F55 live camera production units were used for the production and a PXW-FS7captured the images for the “making of”.

After extensive tests and due to the production’s high quality requirements, TopVision had previously been the first European broadcast service provider to invest in the new PWS-4400 server technology from Sony. In total, this enabled twelve UHD signals to be transmitted to the OB truck, recorded as individual XAVC files and then transferred to external hard drives in realtime. The live signals were mixed with a multi-format video switcher from Sony’s MVS-X series.

All of the 4K live images were sent via fibre optic cables straight to TopVision’s Ü2 OB truck, which is optimised for HD/UHD production. Here, the director created the live signal with a resolution of 3840 x 2160 pixels and a frame rate of 50 frames per second (2160p50) and the graphics were added. The final mixed programme output was sent to SES Astra’s broadcasting centre in Unterföhring in Germany via four fibre optic cables with a total bandwidth of 12 gigabits. The concert was broadcast on a free-to-air Astra demonstration channel.

“The production went smoothly without any technical issues and the result exceeded our expectations. The intensive and meticulous testing in advance has paid off for us,” said Jendges. “Our decades of experience with the broadcasting specialists from Sony has paid off: we worked together to fine-tune the 4K workflow here, and to align the technologies with each other for a broad spectrum of applications in the future”.

Andreas Berghaus, who is responsible for live productions at Sony Professional, was enthusiastic: “Ultimately, the task at concerts is to transmit emotions and blow viewers away — with exceptional pictures in the best possible quality. This was achieved with impressive success for this production.

“Both the intensity of the close-ups as well as the multitude of details from the adjustable camera settings were perfect for a high resolution production. That really made the hairs on the back of your neck stand up.” Other benefits of Ultra HD images are the “advanced opportunities for post production and the high quality for archiving,” he said.