Not to be left out of the 4K party at CEATEC in Japan this week, Toshiba has rolled out a 4K television of its own. The 84-in. Quad Full HD set is powered by Toshiba’s new high-octane multiprocessor, dubbed the REGZA CEVO Engine 4K. 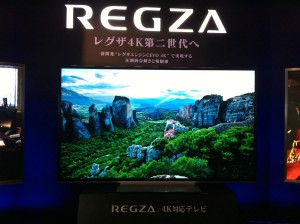 A trio of 84-in. 4K television sets is on display at Toshiba’s booth at CEATEC.

A trio of 84-in. 4K TV sets is being demonstrated at Toshiba’s booth showing both native 4K content and upconverted 1080p content (including the opening scene of The Dark Knight, originally shot with IMAX cameras). According to Toshiba, REGZA CEVO Engine 4K provides higher-quality upconversion than other 4K sets can offer, creating a 4K picture that looks more organic.

A rep at the Toshiba booth said the company plans to bring three 4K sets to worldwide market during first half 2013: the 84-in. model on display at CEATEC along with 60- and 50-in. units. No official pricing information was available.

A 4K path for the future
Although both the new sets and the upconversion technology are big steps in Toshiba’s march toward 4K, they appear to be only the beginning in a long-term commitment to the format. At a CEATEC conference session on Thursday, Toshiba Chief Technology Executive Seijiro Yasuki provided a sneak peek into the company’s 4K plans.

He also laid out a four-step process for the ideal evolution of the 4K format over the next decade. The first step is quality upconversion from HD to 4K (or 2K to 4K), which Toshiba is already targeting with the REGZA CEVO Engine 4K. The next step will be multidevice collaboration (TV, mobile devices, computers) using the 4K format. After that will be delivery of full-4K-quality content to IPTV, and, from there, the next jump will be to 8K.

With the 1080p-to-4K upconversion technology ready to hit the market, the next step for Toshiba is 4K computer/TV integration. According to Yasuki, the company plans to launch 4K computers capable of integrating with 4K television sets as early as next spring.

Odds and ends
In other Toshiba TV news, the company is showcasing the new Z7 series and J7 series REGZA sets at its booth. The Z7 offers a new “time-shift machine” that can record up to 40 hours and six terrestrial broadcasts and suggest programs to view based on user’s previous choices.