Discovery-Eurosport selected 3Zero2 TV, an Italian company from Cologno Monzese,to support its efforts in Italy to deliver the Olympic games to viewers. Founded in 2002 for the management of a production centre for Disney Channel, over the years 3Zero2TV has evolved, most notably by becoming part of Euromedia Group and, in turn, boasting even more facilities.

The configuration as a video service includes a wide range of technical equipment, including two OB Vans, post-production, ENG crews and a playout centre. The company has the entire broadcast supply chain, starting from the conception of a TV programme to delivery and its best-known customers (besides Disney0 include Sky, Mediaset, Juventus Channel, Torino Calcio and Infront.

Massimiliano Anchise from 3Zero2 TV, said: “We were able to create a very complex system in a very short time, accepting the challenge of Discovery Eurosport with great serenity and as a single customer. We took care of everything.” 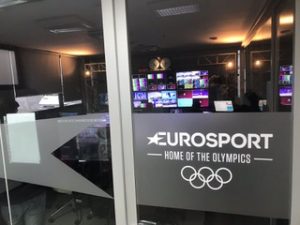 The technical structure has two OB Vans trailers dedicated to Italy, of the same size, equipped with 22 cameras and seven EVS replays. About thirty post-production suites with Avid are available in the Cologno production centre, of which about ten are normally engaged in Mediaset tv programmes. The MCR structure manages the broadcasting of 32 TV channels. There are two sound and dubbing post suites, while ten comment booths were dedicated to Eurosport1 Italia and Eurosport2 Italia for the Olympics.

The commitment to the Olympic Winter Games required a large expansion of the structures and the creation of two technical nodes, a sub-MCR area and a new operating gallery connected to the post-production suites. For the Olympics, these worked 24 hours and could share the media resources of a giant MAM, from which to draw clips to prepare stories and inserts.

From Korea, there were 50 feeds that were ingested on EVS servers. An entirely new studio dedicated to the editorial/production structure of Eurosport, was set up in dedicated spaces in Studio 4 in Cologno; it worked to follow live productions at night and in time-shifted by day. Some commentators were in Korea and others in the Cologne studio.

In the studio were four cameras, two 9×9-feet LED wall screens, 55-inch monitors and a set design that reflected the Olympics logo. This same set will still be used by Discovery Eurosport for the next games, the Tokyo 2020 Olympics.

Anchise said the sharing of internal TCP/IP networks serving the comment stations (DANTE/AES67), implemented the sharing of TCP/IP communication systems between the nodes and from/to Korea and the real-time TCP/IP connection to the Eurosport issuing servers.

“The system was based on Ross Video Ultrix hybrid matrix, HDSDI baseband 64×64 + MADI 128×128, capable of generating 17 levels of independent operation A / V, multiviewer, embedding/de-embedding and audio shuffling,” said Anchise. “The video switching was entrusted to the SAM Kula v.3 mixer. The audio mixing engaged was the DIGICO D1-live. The synchronisations and processors were Lawo V8-pro. For communications, we relied on Riedel Artis 32+128 IP; optical/electric transport systems from Evertz; and baseband from Barnfind.”