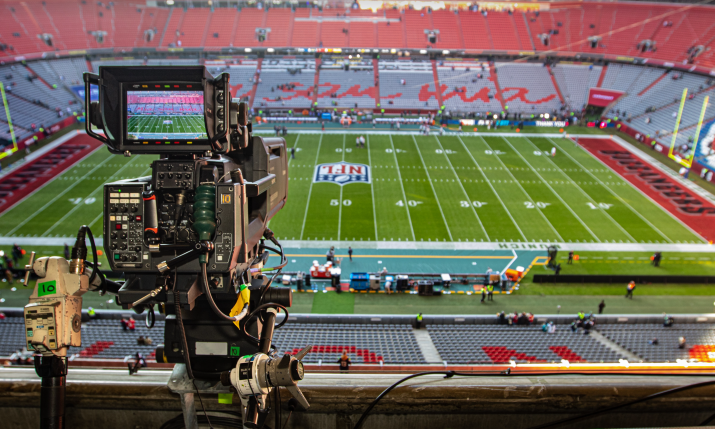 At the first-ever NFL regular-season game in Germany recently, Tampa Bay Buccaneers claimed a 21-16 victory over the Seattle Seahawks in front of 69,811 attendees. After the game at the Allianz Arena in Munich, Tom Brady, the Buccaneers’ star Quarterback, described the win as, “one of the great football experiences I’ve ever had”.

Also buoyed by the success of the game, which took place on on Sunday 13 November, would have been Bill Morris, COO at EMG, who headed up the broadcast facility company’s operations in Munich for NFL Media.

SVG Europe spoke to Morris before the start of play at Allianz Arena, normally the host to a different kind of football and home of reigning Bundesliga champions FC Bayern München.

“It’s a world-class stadium, one of the most famous in Germany,” says Morris. “However, it has never done an event that was not football.” 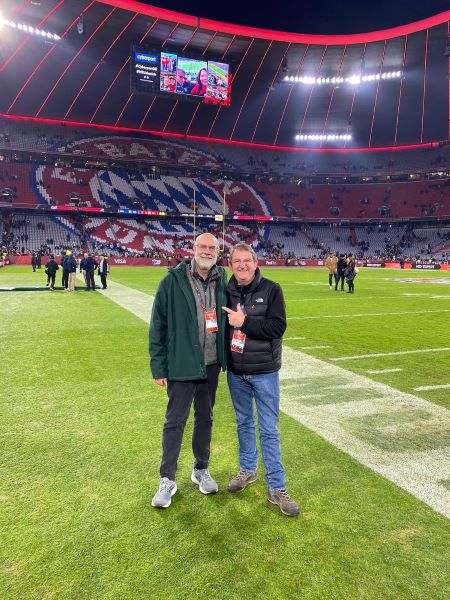 Bill Morris, COO at EMG, with Adam Acone from NFL Network in the Allianz Arena, Munich, ready for kick off

According to Morris one of the biggest hurdles, every time the NFL goes to a new stadium is explaining the scale of what is required.

“There’s a very steep learning curve for the venues that we go to, both in terms of the demands we make at the venue in terms of infrastructure and overlay that we put in, and the fact that the entire stadium is branded NFL. There’s no soccer signage,” he says. “So it’s not just a technical overlay, it’s also an aesthetic overlay. There’s a shock factor involved for the venue when this enormous operation rolls in and literally takes over.

“We rolled into Germany with more or less the same circus that we use for the London Games in Tottenham and Wembley. It’s similar in scale to a Monday Night Football, quite a large operation which we always refer to affectionately as a ‘mini-Super Bowl per week'”

“The NFL does things in a very specific way,” he continues. “Like rock and roll and major live entertainment shows, it has many facets which football – or soccer – does not. So the stadium had to adjust to the NFL’s way of event management and the way they do their overlay in the stadium. There’s been a learning curve on both sides, but the stadium has been fantastic. They’ve embraced the whole idea of having the NFL in Germany for the first time and are very much on message, organising locally, and doing the overlay that is so important to an NFL game.”

Then there are the comms, which play a unique and crucial part in any NFL game. “Everyone on the team, the coaches, the management, and the players, are linked by a comms system, whereby gameplay and strategy are changed and discussed in-play,” says Morris. “There are communication systems designed for the referees, and the governance of the game.”

Then there’s the fact that television runs the timing of the game. “Unlike most European sports, the TV [dictates] when to break the play to coincide with commercial breaks, so there are also communication systems to support that. All of that overlay and infrastructure didn’t exist, and it had to be shipped in.”

Morris and his team at EMG have been involved in broadcasting games for the NFL for the past 15 years, beginning with the commencement of the NFL London Games in 2007.

“We rolled into Germany with more or less the same circus that we use for the London Games in Tottenham and Wembley,” says Morris. “It’s similar in scale to a Monday Night Football, quite a large operation which we always refer to affectionately as a ‘mini-Super Bowl per week’.”

The TV compound at the Arena, where the host operation and the unilateral operations are based, consists of eight production trucks plus fifteen ancillary vehicles for offices, graphics operation, B-units, office space, transmission suites, and others. The main host broadcast control room is EMG’s Nova 111.

“Our US clients [in Germany] must adapt somewhat to the European way of working; the difference between European and US trucks is about 10 feet in terms of length,” says Morris. “So around the core of the trucks, we have built a small village of cabins. We brought our Flypacks and built out graphic areas, transmission areas, Hawkeye and NFL feed delivery areas, big refrigerator cabins and so on.

“There are multiple unilaterals on site here in Munich,” Morris continues. “We have three with an OB presence: Sky and ProSieben in Germany, and DAZN. We also have Saudi Arabian television here, and multiple other media operations taking the feed remotely who may have a small footprint on site in terms of talent with a camera. There is an NFL international team who co-ordinate that and we discuss the technical facilities that are required for each broadcaster.”

Each unilateral broadcaster will take up to a dozen feeds and they will also take the clean and dirty programme feeds from the US.

“They usually take the US announcer [feed] for the immersive NFL experience; having the analysis given to the viewer by a US team who do it day and day out,” explains Morris. “It is a completely immersive experience and I think that’s the intention; for the three hours you get immersed in the epicentre of US culture, which is the NFL.

“In terms of connectivity, we’re using IP over Fibre operated by Lumen. We have The Switch doing some unilateral delivery. Most of our reserve delivery is via uplink, which is booked directly by Fox,” adds Morris. 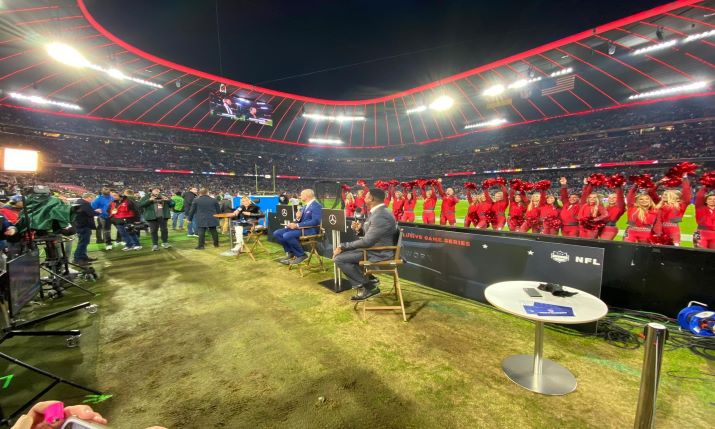 The NFL comes to Munich, as Tampa Bay Buccaneers took on the Seattle Seahawks in front of 69,811 attendees

Despite the location change, and the full-on presentation extravaganza that NFL Network has been bringing from Germany over recent weeks, the game itself will not appear any different to the average NFL viewer anywhere in the world, especially the home market in the US.

“The regular fans shouldn’t notice a difference in terms of coverage or the layout of the stadium or the field. It should be entirely familiar,” says Morris. “The aim is to roll out a weekly league game, albeit with the excitement that it’s the first time that the NFL has been in Germany for 30 years, and certainly the first time a US league game that counts towards the championship has been played on German soil.”

But while no different for the US market, it’s a new setup for the Allianz Arena.

“NFL coverage is unique,” says Morris. “It’s very different from soccer coverage. The main difference is everything is shot from a much higher angle. That has brought its own problems with the stadium, in that it’s very well geared for soccer coverage. We’ve had to create our own camera positions higher up in the bowl, where there’s no connectivity. We’ve had to put in around 60 kilometres of cabling in terms of home runs into the stadium, to be able to get the overlay and infrastructure that we require.”

Each sideline hosts an Olympian tracking vehicle called a Cart Cam. “I imported the first one into the UK 15 years ago for the first NFL London Games,” says Morris. “This year Chapman has helped me import a second one for the next three years of NFL events in Europe. These are large electric tracking vehicles, which have extending turrets for camera operators. They’re not used for on-shot tracking, instead, they’re used for rapid deployment. So as the game moves down the field, as each play unfolds, the cameras can move to the frontline of offensive or defence in line with the play.

“We use both Skycam and SpiderCam on NFL,” continues Morris. “We have handheld cameras running on the sidelines, RF cameras picking up the analysis all around the field, and we have low endzone cameras, which are designed to pick up play from a low POV at each end.”

“We have robotic cameras from ACS, our sister company in EMG, in multiple strategic locations including the goal, which regularly gets hit by the football. We have robotics in the locker room corridors, and we have little remote POVs in the coaches’ booths.”

In case that wasn’t enough, the NFL has LE-style camera crews on the ground for walkouts and the build-up, while a separate operation supplied by NFL runs multiple cameras for stadium screen presentations for the fans.

“We tend to shoot in the domestic framerate, because of all the unilaterals and the fact that we share so many feeds, so we don’t have to have a complete distribution centre just for standards conversion,” says Morris. “We are shooting 1080/50p and all the output is standards converted on the way out.”

The audio for the game coverage is produced in 5.1. Morris explains: “We are capturing a lot more audio sources than you would with a soccer game. We have a team of parabolic microphone operators on the sidelines. It’s an old technology, but it’s very good at picking up sound over long distances. We have microphones attached to the Skycam so that we can get close audio from the team huddles, and the action on the field.

“That, all combined with the parabolic mics, the spot mics that we use, as well as the enhanced feed that we pick up from the NFL [where the NFL’s stadium mixer captures the quarterback’s line calls] means that the audio is equally important to the pictures, it’s a completely immersive experience.” 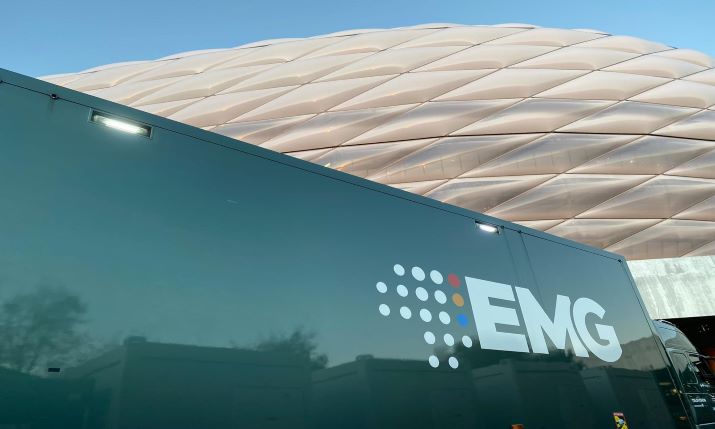 All this takes a lot of power. “The power distribution is quite significant,” observes Morris. “All distribution of the content, all the power, lighting, and screens remain on the local frequency, which in this case is 50Hz.

“We’ve brought in Aggreko who are working with our UK partners Film & TV Services (FTVS) to do all the power distribution throughout the compound, and all the mission critical technical areas and broadcasts areas in the stadium,” he continues. “So we have a very large presence from Aggreko on site, and a large cohort of UPS units backing up the mission-critical areas. The power distribution is complex, but it’s also robust and all about redundancy.

In terms of sustainability, a big driver in Germany, the power is generated using biofuel, while the NFL has also created an emission offset plan.

“Television is sustainable to a point but unfortunately, it is still very dependent on large amounts of electricity,” says Morris. “That electricity has to be generated somehow, but it is generated from the most sustainable point that we possibly can.”