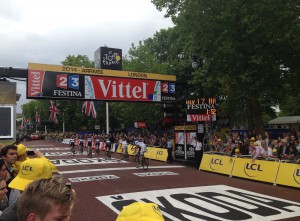 For the first time, Euro Media is utilising the new Grass Valley LDX Series cameras on the motorbikes used to capture up-close coverage for the Tour de France. Commencing in Leeds on 5 July and enjoying rapturous crowds along the route, the UK leg concluded in London on 7 July with a stunning fourth stage victory by German Marcel Kittel.

Sitting outside his office (read: caravan) in the OB compound less than an hour before the cyclists arrived on the Mall, Euro Media Group international business development head for wireless production facilities, Bruno Gallais, revealed that the use of Grass Valley LDX Series cameras on the five bikes tracking the race is one of the primary changes to its RF configuration this year.

“The [LDXs] are very powerful, very high quality; we are very happy with their performance,” says Gallais, noting that another model of Grass Valley camera – the LDX 8000 – was used in previous years. In addition, GV developed a special beltpack for the cameras to be deployed with the new set-up.

Pictures from the camera bikes are augmented by a trio of helicopter-bound Cineflex V14HDs, which deliver a gyro-stabilised solution for aerial filming. Together with the (embedded audio), all signals are delivered to France Télévisions, which subsequently delivers domestic, international and ‘super international’ (containing additional elements, such as interviews with cyclists) programmes.

The addition of an extra channel to the audio captured by the bikes (“for greater detail”) aside, other changes to the Euro Media TdF configuration were fairly few and far between this year. But Gallais confirms that the set-up was as pressured as ever.

“The Grand Depart is always a challenge as [it’s immediately beforehand] that we make the global set-up for the whole Tour,” he says. “We arrived in Yorkshire two days before to put everything in place, test the connections between the trucks, and so forth. But prior to that, we make a general connection plan and conduct a major test in the parking lot in front of our office in Paris [so we are as ready as possible].”

A change of frequencies necessitated by UK operation aside, the first four stages of this year’s Tour didn’t throw up any specific issues. Now Gallais and his team can look ahead (if exactly not forward) to the mountainous phases of the French leg. “Working up in the Pyrenees is never easy; the installation has to begin very early in the morning and there are lots of people [lining the route]. But we are used to it by now,” says Gallais, who is perhaps verging on the side of understatement given that, in 2015, he will have been involved with broadcasting the TdF in one way or another for 30 years.