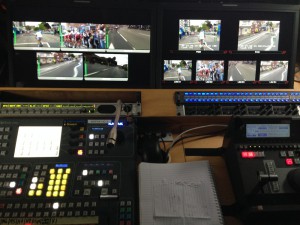 Additional coverage, revamped graphics and new onboard cameras are among the features ensuring that the broadcast production of the Tour de France is bigger and better than ever this year. France Télévisions’ head of sports, executive production, Francis Cloiseau, talked SVG Europe through the logistics of the current coverage – and revealed a few hints about a (very) big data plan that could deliver major enhancements at future events.

Francis, please talk us through the core OB set-up for the Tour…

Cloiseau: We have five motorbikes [in operation at any one time], two audio motorbikes, two helicopters with Cineflex cameras, and around eight cameras [Sony HDC-1500s] on the finish line. We work with two different OB vans – one for the race and one for the programme after the race. [With the resulting material] we produce coverage for a domestic feed, an international one and a ‘super international’ programme containing interviews with the riders and all kinds of  additional information. All [are overseen] by the same director.

In terms of the live programme, there are no special processes [above and beyond our set-up for other events]; we are working with external feeds directly on the video switcher, and it is after that that things become more complicated with all the feeds residing on the media server [EVS]. All the motorbike and helicopter pictures are on the media server, together with extra elements produced before the race, such as images captured around each stage [to give a sense of place]. The great challenge, then, is integrating and managing all of this effectively.

Were there any significant changes to the set-up this year?

Cloiseau: Not really – every year we do make some small changes, but nothing major on this occasion. The core objective is always to optimise [the existing elements of the set-up].

Gallais: One thing that we will be doing is trialling the use of video on bikes during the women’s race on the morning of the Champs-Élysées stage. Two of the bikes will be equipped with cameras, and [the images] will be used in the broadcast. It’s a very special development with compact transmitters, and the total weight will be only 400-500g. As for the future use of these systems, we will decide what to do after the race with the agreement [of the organisers], of course.

Can you reveal more details about plans to deliver more instantaneous data from the races?

Cloiseau: This is really geared towards the second screen [aspect] of the coverage. The goal of the project, referred to as Smart and Connected Sensors, is the instantaneous position of all the racers and a wealth of data to be made available. The resulting data would be channelled into second screen, rather than traditional broadcasting, and would enhance an offer that already includes the ability to select different camera positions [currently five at any one time].

So data would include not only GPS positions, but information like speed, various averages… we could be looking at 200 pieces of information at the same time.

Presumably this is going to call for a very complex plan?

Gallais: The RF system that will be tasked with the responsibility will be very sophisticated. We are in the midst of development now and are doing some tests [in conjunction with standards body ISO]. The project has already been underway for three years and the goal is to have an application next year. It’s a very exciting prospect and will see us continue to work in close collaboration with FTV, ISO and professional cycling’s governing body, the UCI. More details to follow in due course!