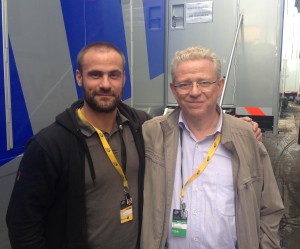 Whilst its involvement as RF specialist for the Tour de France reaches back over more than three decades, Euro Media Group is constantly on the lookout for innovative new technology that it can add to its configuration for world cycling’s most prestigious event. Hence its recent evolution of a sophisticated sensor technology, known as SMACS (‘Smart Connected Sensor’), that can send back a wealth of information about cyclists’ performance for use both on- and off-screen.

In development for approximately five years, SMACS involves the deployment of sub-80g sensors located under the seat of each rider. Data gathered from the sensors (operating in low UHF/VHF frequency ranges) is then relayed back to a variety of intermediate points – specifically, cars and motorbikes located close to the route of the race – and then via satellite uplink back to the OB truck or broadcast centre. Precise information on rider performance and exact position at any given time is among the data that can then be logged for future reference and, more imminently, incorporation into on-screen graphics.

“There are definitely other sports to which we think this technology can be applied – rugby in particular – but cycling was definitely the original target,” says Euro Media France engineering and R&D chief Rudy Dendleux.

Accordingly, the last few years have witnessed a number of notable trials at other major cycling events, including a deployment at the 2014 UCI Road World Championships – as reported by SVG Europe contributor Fabrice Marinoni last September. After a small-scale demo at last year’s event, it was decided that the Tour de France was also ready for the SMACS experience – to which end, Euro Media and a local subcontractor manufactured more than 400 sensors in the run-up to the 2015 race in order to have sufficient back-ups for riders throughout the notoriously demanding contest. 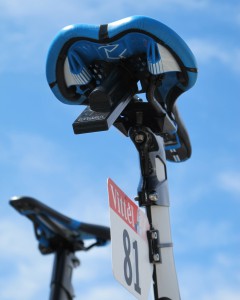 But even when TdF 2015 got underway, SMACS was very much a work-in-progress, as Dendleux confirms. “Oh yes, we were constantly making changes. The user interface changed every single day,” he laughs – although to SVG Europe’s eyes, what has emerged from this doubtless tortuous process is a very smooth and sleek-looking GUI.

On the final day, the total deployment of sensors is generally working at around 90% efficiency – a highly creditable performance, although Dendleux is clear that there is much work still to be done. “We need to do more [about retaining connection] during the downhills, as well as interfacing the GPS with the technology that performs the mathematical calculations,” he says.

Despite these issues, SMACS has undoubtedly proven to be a valuable addition for TdF organisers ASO as well as AD – the firm charged with generating the broadcast graphics on behalf of host broadcaster France Télévisions (another company, Dimension Data, oversaw and managed the database to extract specific information and to feed the Beta Live Tracking website).

“It’s an extremely complex technology, and clearly it will go through further refinement, but we are very pleased with its performance in what is essentially a trial year,” says Euro Media Group CTO Luc Geoffroy. 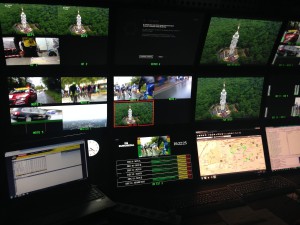 For Euro Media, Tour de France 2015 has also witnessed one of the first major outings for its new unit, C42. Sporting the recently overhauled Euro Media logo and branding, it is a multi-purpose truck able to host RF main control room and sensor management functions, as in the Tour de France, or operate as a standard medium-size production OB van. UHD-ready, the truck can accommodate up to 12 cameras, 6 positions for EVS servers, and approximately a dozen graphics systems. Fully equipped for the IP networking age, C42 is based around the capabilities of the Snell Sirius routing switcher, the Snell Kahuna 360 video switcher with new Maverik Panel, and the LSB-VSM universal control system.

It is also Euro Media’s first French market-serving truck to feature a Lawo console – specifically an mc² 56 – while audio monitoring is courtesy of a Neumann-based configuration.

“The Tour de France has been another important test for the truck, and I am delighted to say that it has performed brilliantly,” concludes Geoffroy, who adds that there are plans to upgrade at least one other of its OB trucks in the near-future.