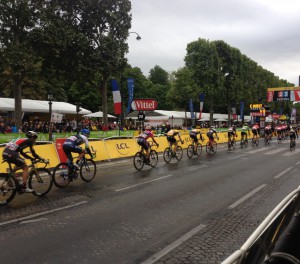 TdF participants undertake one of the 10 7km laps around the Champs-Élysées as the end of the 2015 event approaches. (Pic: David Davies)

The basic separation of duties between France Télévisions and Euro Media Group during the Tour de France is well-established – in a nutshell, FTV provides the OB vehicles which facilitate the complete production of the world feed, while Euro Media furnishes the RF and terrestrial-based equipment to get camera and audio signals from the motorbikes riding alongside the race to the compound – but that does not mean that further refinements to the broadcast infrastructure aren’t made every year.

For example, the 2015 edition has heralded the deployment of two additional cameras at the finishing line – specifically a slow-motion unit capturing at 150fps, and a super slo-mo DVS Superloupe filming at 250fps. The first camera is the new Sony HDC-4300 and the second a DVS homemade camera based on the Phantom Flex.

“We wanted to be able to have a greater range of cameras to capture the action at the finishing line,” confirmed Yves Jardon, engineer in charge of FTV’s Le Jumeau de Lille truck, which was positioned mere metres away from the finishing line ahead of Saturday’s closing stage.

One of two trucks deployed by FTV for the event, Le Jumeau de Lille accommodates a maximum of 20 camera positions – with Jardon confirming that a grand total of 17 were used for the final phase of this year’s race, including the aforementioned new additions alongside Sony stalwarts such as multiple HDC-1500s and -310Ks. Of course, the team is also able to call on the RF-equipped units fielded by Euro Media Group, which include Grass Valley LDX WorldCam cameras with LiveTools HD Runner III and Colibri adapters for transmission on the five motorcycles following the race, as well as Cineflex cameras positioned on the two helicopters continually flying above the action.