Following Monday’s rest day, the Tour de France heads into the mountains this week with Stage 10 to Le Grand-Bornand and Stage 12 up the monstrous Alpe d’Huez. 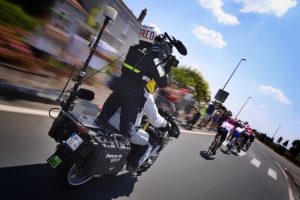 Euromedia is providing all long distance RF cameras and systems for A.S.O and France Télévisions for the world feed and unilaterals. The RF links have been internally developed by an EMG company, Livetools.

Euromedia is providing four RF trucks for relays and coordination, two Superloupe DVS on the finish line and one RF on motorcycle 4.

There is a Euromedia team of 80 people on the three-week Tour de France, including dedicated motocycle riders, pilots and camera operators.