Jean-Maurice Ooghe is currently directing the 23rd production of the Tour de France for France Télévisions. The early Stages this week are largely benign for the peloton, before heading into the high mountains and individual time trial challenges towards the end of Week Two of the race.

Over the years and thanks to the new technologies driving change, Ooghe has significantly developed 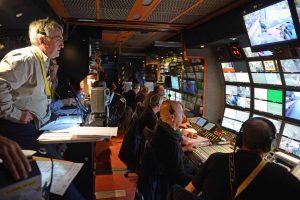 the scripting for this major sporting event. “As cycling does not take place within the confined area of a stadium, it is absolutely essential to take advantage of the fact that we can use the freedom of the outdoors to combine this sport and our natural and cultural heritage,” he said.

“In addition to showcasing the beautiful scenery, the Tour has become the ideal occasion to discover French history and geography.”

Race director Christian Prudhomme fully agrees with this narrative. Moreover, it should be noted that he has undoubtedly contributed to the continuing success of the Tour despite and including the bleak years marred by doping issues.

In addition to France Télévisions, who are in charge of the coverage of the race and its surroundings, there is also an impressive RF set-up managed by Euromedia.

Two helicopters cover the race with two cameras. One is a gyro-stabilised camera system with a telephoto lens that takes close-ups of the race and the second one is a wide-angle lens that films the sweeping landscapes and the peloton of cyclists.

Two airplanes relay the footage via RF to the TV studio and master control room. On the ground, five motorbike cameras follow the race and two fixed cameras are placed at the starting line (five in the case of race-against-the-clock time trials, with five others at an intermediary point). Ten to twelve cameras are positioned at the finish line.

“Today, filming sports events involves capturing action and emotion closely,” said Jean-Maurice Ooghe. “For the first time this year we are using several Loupe and Superloupe cameras on motorcycles to capture a maximum of detail in super slow-motion. We trialed this last year on one motorcycle.

“Another major immersive innovation for this year’s race is 4G on-board cameras fitted on certain bicycles, which will allow for live coverage if the signal is good. They are rear-facing cameras that film the rider just behind.

“In future I would also like to include innovative sound solutions for the Tour de France and in particular the unique sound produced by the peloton when it speeds by. I hope this will be possible in the next few years,” said Oohge.

The cultural heritage perspective is also gaining traction this year. During the many weeks spent scouting the Tour de France route, specific places of interest were selected by the director and his teams to feature in the live coverage.

In May and June, some 30 days were spent shooting scenes with the help of drones. Also, for the first time, images shot inside the Reims and Albi Cathedrals will be incorporated and broadcast together with the live aerial footage shot outdoors to give the impression of seamless movement in and around the buildings. Proof that cultural heritage can also benefit from increasingly immersive experiences.