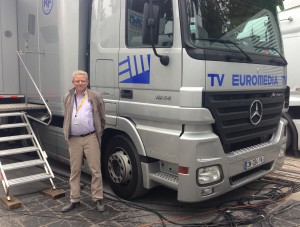 An ongoing RFQ related to a planned substantial investment in camera technology signals a new strategy by Euro Media Group to “standardise on one brand for each area of technology, wherever possible,” revealed CTO Luc Geoffroy during SVG Europe’s 26 July visit to Paris for the finale of Tour de France 2015.

“It’s very much a new project for us, but the basic idea is to totally harmonise the pool of equipment that can be shared across the Group,” he says. “The reason we have started with cameras is simply that we are coming towards the end of a cycle and need to start thinking about renewing our camera capabilities.”

Accordingly, under the steering of new technology officer Ronald Meyvisch and group purchasing director Emilie Deshors, an RFQ has lately been dispatched to five leading vendors with a view to hopefully making a final decision in advance of IBC 2015. “Of course, there are a lot of factors for us to take into account, including overall quality ease of use, customer acceptance, price and so on,” adds Geoffroy.

In essence what Euro Media is seeking is the creation of a workable “frame contract that allows us to move between the CAPEX and OPEX models. For instance, we don’t really know when the [need to film extensively] in UHD will arrive, so the idea is to identify the less expensive cameras as a CAPEX, with 1080i 50 (standard HD) as the base configuration for our needs at this time. When we require more for 4K, eg 1080p, HDR, HFR, then we can ideally have the ability to license additional equipment on a pay-per-use basis.”

Successful deployment of a combined CAPEX/OPEX model should also reduce the initial outlay in new equipment, which will be of obvious financial benefit given that we are talking about “somewhere between 300 and 400 cameras” figuring in the upgrade.

The thorny question of 4K rollout is clearly crucial given that there remains so much conjecture about adoption of the format. Geoffroy confirms that there was no 4K capture at this year’s TdF, and estimates that “it could be five years” before it is a big part of the event’s broadcast production. But elsewhere, Euro Media is certainly experimenting with the format, not least during the filming of a spectacular concert in Rome by prog-pop band Muse.

In time, Geoffroy expects the standardisation methodology to be applied to other areas of technology, and suggests that glue could be one of the next candidates.