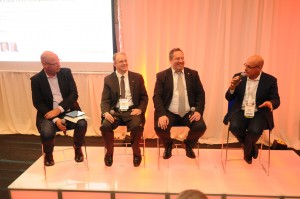 4K/Ultra HD technology has matured over the past few years. The distribution methods to get that content to the home, however? Still a work in progress. At SVG’s TranSPORT conference earlier this month in New York City, some experts in 4K transmission shared their perspective on how the rise of the High-Efficiency Video Coding (HEVC) standard could break the game open and why high dynamic range (HDR) is garnering a cult following in live sports production.

Beginning with HEVC, it was clear that the emerging standard is critical to getting 4K/UHD content to the consumer’s home effectively even though the current 25 Mbps is likely not enough for live distribution.

“You will not have 4K to the home without HEVC. Period,” said Matthew Goldman, SVP, technology, TV, and media, Ericsson. “The bitrates are too high, and the previous standard — AVC — while you can make it do it, it’s not the way to go at all. As it is, right now, with the state of technology, HEVC is still relatively immature. You still need about 25 Mbps to have decent-looking 4K. It won’t stay that way; it will get lower, but that’s where it is right now.”

Although AT&T (DirecTV), Rogers Media (Sportsnet), and Bell Media (TSN) have been 4K/UHD trailblazers across North America and more content creators are looking to distribute sports events live in 4K, HDR has emerged in 2016 as a new favorite for many live sports productions. There was a feeling of regret reflected among the speakers that the 4K and HDR couldn’t have grown up side-by-side.

“We think we would have loved to see 4K and HDR occur at the same time, but 4K matured as a technology probably two years sooner,” said Philip Goswitz, SVP, video, space, and communications, AT&T Entertainment Group. “So I think it’s unfortunately going to be confusing for customers as we try to roll it out, but we’ll all tackle that as an industry. I think there’s no doubt that high dynamic range and 4K create this wow experience that’s transformative and has the potential to change all of our careers.”

Outside the live environment, 4K/UHD is flourishing. According to Thomas Edwards, VP, engineering and development, Fox Networks, all new movies produced by 20th Century Fox have a 4K, HDR, wide-color-gamut version. That’s mostly going to be distributed via UHD Blu-ray discs, making for an easier distribution method.

It’s the multiple layers of distribution that Edwards believes adds to the anxiety around 4K. “I think one of the biggest challenges here is the multiplicity of distribution channels and some of them, like DirecTV, probably could do 4K/HDR tomorrow,” he said. “But there are other distribution channels, like over-the-air television, that obviously can’t do HDR and 4K today. So the problem is that, for someone who creates sports content, it’s challenging to sell it to someone who is new and experimental, and then you have someone who is providing lots of dollars for a long period of time. You do have this kind of conflict.

“We saw this with 3D as well,” he continued. “It was awful challenging to do 3D through multichannel video providers at the same time that you want to do that same game in HD through broadcast. Over time, more distribution channels will go 4K- and HDR-capable. Until then, the channel-cannibalization problem will slow it down to some extent.”