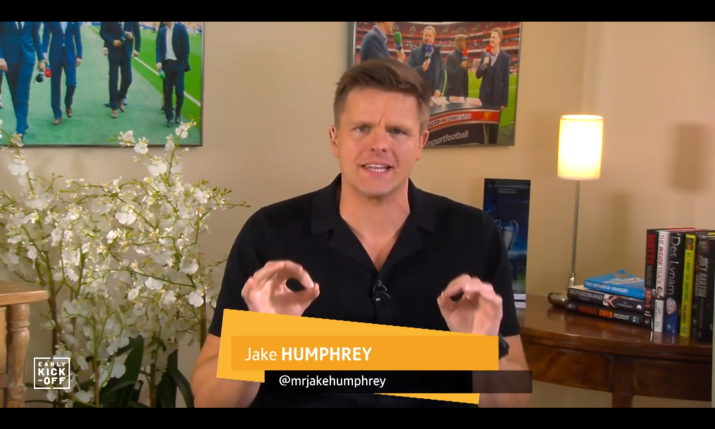 Presenter for Early Kick Off, Jake Humphrey, working from his home in Norfolk

Sunset+Vine was instrumental in producing BT Sport’s Early Kick Off programme with a new format designed exclusively for football fans on lockdown.

The first programme broadcast at 11am on Saturday 28 March was pulled together with Sunset+Vine working with Timeline TV and a remit from BT Sport to give viewers their Saturday morning football fix while creating a new remote workflow for crew under lockdown, which has been part of this year’s stand out production revolution.

Stephen Booth, Sunset+Vine executive producer for the show, has given SVG Europe his view from the inside of that production on the learning curve, challenges and benefits.

Sunset+Vine started producing Early Kick Off for BT Sport this season after finishing a year on Premier League Tonight. On how the move to remote production for the programme began as COVID-19 began to spread within the UK, Booth explained: “We did a live UEFA Europa League programme on 12 March, and it was while we were on air that news came through that Mikel Arteta had tested positive for COVID-19. We were all set to do Watford v Leicester on Saturday 14 March, and that got postponed along with all the other Premier League games on Friday 13th.”

BT Sport immediately set Sunset+Vine the task of working out how to give viewers their Saturday morning football fix, while Timeline TV was tasked by the broadcaster to discover how to make these live programmes happen during lockdown.

Booth commented: “BT Sport came to use to ask us what can we do to give viewers their Saturday lunchtime football fix. There was a bit of back and forth debating what the best thing was, and we had the Early Kick Off brand, so we thought we’d do something around that.”

For the programme due on 21 March, Sunset+Vine did a ‘best of’ Early Kick Off of the top moments of the season so far using a few recorded links on Carrow Road around Norwich City’s football ground with presenter Jake Humphrey, who is based in the county. 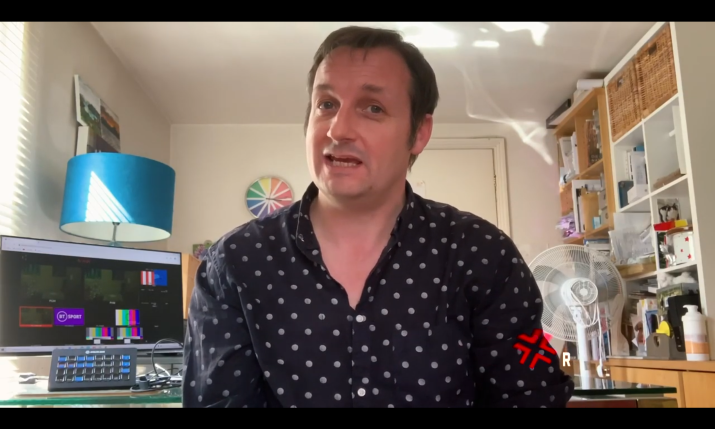 Moving on, Booth said the next programme occurred after a scramble to get kit out to the production crew and to set up Humphrey in a home studio: “For the 28 March we did an ‘as live’ Early Kick Off [with the team all working remotely]. Ahead of that week we came up with the format for an hour and a half programme [that would work during lockdown], and at the same time Timeline were working on a remote [working] solution for not only Early Kick Off but all other live programmes on BT Sport.”

He added: “We compared notes, but Timeline really were at the forefront of working out this remote production workflow. We and a couple of other productions were very much the guinea pigs for putting this into production.”

Instead of operating from the ground of whichever football match Early Kick Off was gearing the fans up for, Sunset+Vine had to spread its operation for the live programme across England. Shortly before a complete lockdown was announced by the government, Sunset+Vine, Timeline TV and BT Sport scrambled to radically change the way every member of each production team for all the major programmes from the broadcaster operated.

Booth said: “There was a fairly frantic week spent getting all the equipment out and also at the same time we were setting up a studio at the home of our presenter, Jake. He was getting some bits and bobs out of his garage and hanging some pictures on the wall, and we put some lighting in there.

“At the same time we were sending each of the guests two phones; one for the camera, an iPhone 11; and another phone, a Samsung, which had Unity Intercom for a talkback system installed on it; and they also had laptops so that they could see each other.

“We’ll miss being on OBs, and we’ll miss that way of working, but the genie is out of the bottle now”

“For the rest of us, the production team, we each got a monitor for the multi feed viewer so we could see the VT and graphics sources and the output,” Booth explained. “We were sent a laptop which was attached to that, and which had the Unity system installed on it, and we were also sent these small talkback units called stream decks. We set those up at home using our home internet.”

He added: “The vision mixer had a complete vision mixing desk sent to him, which he installed at home, and he had a Reidel panel for talkback. During the course of this series we used a couple of difference sound supervisors; the first one we used had a sound desk in his garage. The VT editors we used all had editing set ups at home.”

With Humphrey filmed with the help of a technical producer and a camera operator in case of technical issues for the pre-recorded show on 28 March, the next five were filmed live with Humphrey supported in person by a Sunset+Vine technical director that lives close by, the production crew all working from various locations across England, and all guests for every programme ‘doing it themselves’. 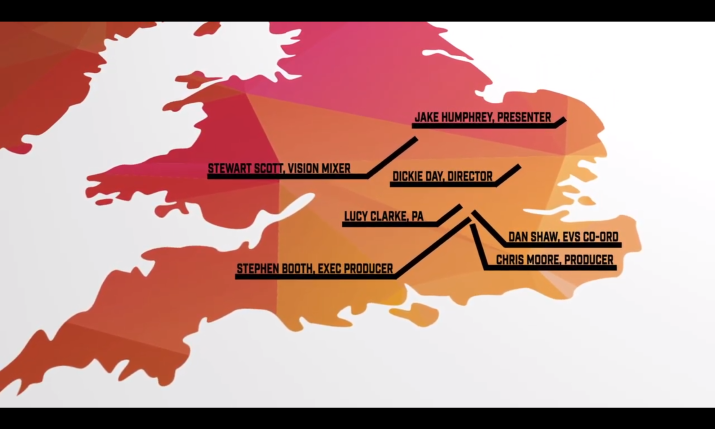 In terms of creativity, the Sunset+Vine crew held a daily production call to talk through ideas. Booth commented: “That was useful. To be honest, when you’re in an office you don’t do those production meetings on a daily basis. But what you miss is having the chats in the corridor and working out things that way. [In a remote production] you end up having more meetings than you would usually have, but it’s hard to replicate that exchange of ideas you’d have when you’re all together.”

When asked about teething problems to do with the live production of Early Kick Off during lockdown, Booth laughed and said, “quite a few!”.

“We had a rehearsal day just to work through all the technical,” he said. “That took a while, just because everyone was working with new equipment and getting set up. Once we actually went live it was remarkably free of gremlins. We had a couple of issues; there was one day where one of our guests got up to show something and her screen cut out and we just didn’t get her back, but what we did find was that the audience were very understanding of that sort of thing.”

He went on: “Probably the trickiest day for us behind the scenes was – I guess this was about three programmes in – the EVS operator just lost his internet access altogether on Saturday morning, so all the VT for the programme with about an hour till Tx was lost. Timeline jacked up another VT operator who was operating remotely from home, and who could run our VT. That was quite a fairly scary prospect. Jake was on alert that he might have to be talking for an hour and a half, which he wouldn’t of minded!”

Booth continued: “We did Early Kick Off for six weeks as a live programme, and it was really encouraging that we were really comfortable with it by three of four weeks in. Once we’d worked through all the technical issues, which I think was the biggest thing, we were comfortable with it.” 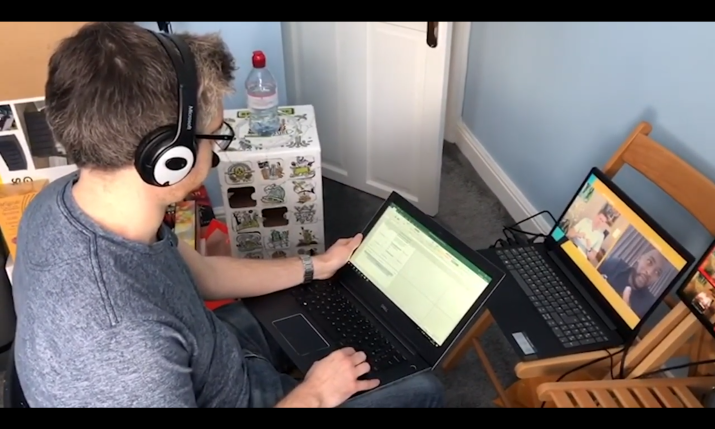 Sunset+Vine’s Chris Moore, producer on Early Kick Off, operating from his spare room in Surrey

On remote production, Booth notes: “It’s already just become a much more normal way of working. But it really did feel that we were at the forefront of doing it in this new way.”

Booth listed some top tips for others in the same position, looking to move to remote production.

The first is based on communication between a remote working team. He said: “The importance of communication; there’s a lot of communication involved in getting everything up and running. Everything in the remote world takes a little bit longer because you’re not able to sort things out in an office environment. I think talkback discipline is really important. Talkback discipline is always important, but in a remote environment, I think even more so, because you’re dealing with delay, you’re dealing with a different workflow, so that’s really important.

“I think working remotely does make things a bit more challenging for a presenter; when he’s in the studio or on site, pitchside, he’s always got that eye contact way of [being told to] move the conversation on, which he doesn’t have [in a remote environment] so there has to be a lot of trust between the presenter and the producer about where you’re going next, who’s talking next,” continued Booth.

Internet connectivity for the crew and having an understanding family are also high on the list of priorities, Booth added: “You’re all absolutely reliant on your home internet and it’s been quite noticeable that people living in urban areas seem to have stronger internet than those  further out; it’s just one of those things you have to deal with.

“And absolutely key to remote working is having an understanding family,” he said. “When you’re on air you’re kind of trusting your family to stay out of the room, and your equipment is taking up a fair bit of room in your house. And you have situations like Joe Cole when he was doing his skill school; that was filmed by his wife and by his kids, so getting the whole family involved.”

Children came in useful in other ways as well, said Booth. “The guests who had children at home; some of them were an absolute godsend when it came to working out the technical bits and bobs. So having an understanding family is really important.”

As to how this new remote workflow might influence or change how Sunset+Vine works in the future on productions, Booth said: “It’s certainly not at the forefront of our minds that we’re going to go back to working the way we did before. That may be something that comes in the long term. But I think the way that this crisis is developing feels like we’re a long way from that.

“Clearly we all got into this game because we like going into OBs, we like being in the company of the people we’re working with. We like the cut and thrust of live TV and the environment. But at the moment that’s just not feasible,” Booth said. “I think once you’ve done it this [remote] way and you’ve proven it can work – even though live games are going to be a completely new and different challenge – but similarly, if that can be proven to work, it can be very difficult to go back and say, ‘yeah, let’s just do what we did before’. There is already, for environmental reasons, a move towards seeing the benefits of remote production.”

He added: “This may have just hastened that whole [move to remote production] along. I’m not saying we’re never going in an OB again, but once you’ve shown this can work, it’s hard to justify everyone [in a production crew] traveling 200 miles for a game.”

Therefore, on whether the way production companies and broadcasters have had to learn to work during the COVID-19 crisis has changed live sports production forever, Booth answered with a resounding, “yes”.

“It probably is,” he went on. “We’ll miss being on OBs, and we’ll miss that way of working, but the genie is out of the bottle now.”