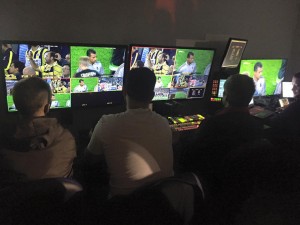 TRT personnel oversee the 4K production of the Fenerbahçe/Ajax match on 22 October.

As previewed on SVG Europe, the UEFA Europa League A Group match between Fenerbahçe and Ajax on 22 October was captured and broadcast in 4K by Turkish Radio and Television Corporation’s TRT4K Channel. The transmission was also made available by the EBU to Beinsport, BT Sport and NHK TV channels, as well to UEFA’s own headquarters in Nyon, Switzerland.

The historic broadcast involved a collaboration between four organisations, namely: TRT, the leading broadcasting institution in Turkey; Turksat, the long-established satellite operator; Samsung; the globally renowned technology provider; and multimedia communications company Mediapro Turkey, which has put its stamp on many exclusive sports productions over the tears.

A total of seven UHD cameras, four EVS XT3 servers, a 72-channel video mixer and 4K broadcast-compatible equipment were used in the production. The set-up and pre-event tests were carried out over three days, while 25 Spanish team members and 15 local Mediapro Turkey team members took part in the production.

Workflow involved a frame rate of 50fps, H265 (HEVC) for encryption, and transmission with 25MHz capacity via Turksat. The signal was sent directly to the satellite instead of being conveyed via a fiber network, and was made available free-on- air to viewers without any encryption or subscription requirements.

After this success of this first production, TRT 4K, Samsung, Turksat and Mediapro Turkey will now collaborate on the 4K capture of a second UEFA match later this year.

TRT general manager Senol Göka comments: “In Turkey we follow the advances in broadcasting closely and we do our best to apply them. TRT 4K will finalise its test broadcasting, and will start its normal broadcast streaming in 2016 January. We are already launching the tests of 8K.”