True parity between linear TV and live streaming? It’s not there yet but getting closer

Although live-streamed video has made monumental strides over the past decade, it is still not quite on par with the linear-television experience. For sports, in most cases, TV still offers better, more consistent quality with lower latency than live streaming on a mobile device, tablet, computer, or connected TV. However, as hundreds of thousands of cord-cutters transition from cable subscriptions to OTT platforms each fiscal quarter, streaming services are under pressure to achieve true parity with linear television. 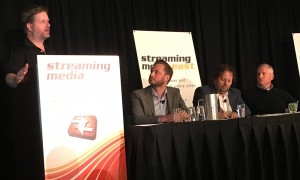 “Internet, for a long time, equaled ‘best effort,’ and best effort is not associated with television,” said Akamai Media Division CTO John Bishop during a panel session titled “Establishing Parity Between Online Video and Broadcast Television” at last week’s Streaming Media East show. “When you turn on a television channel on your pay-tv service, you expect it to work every single time. The internet didn’t align there. Over the last three years at Akamai, we have recognised that we have to get parity in the digital space with legacy pay-TV services or else there is a natural ceiling for digital and it will never go beyond that natural plateau.”

To achieve parity, Bishop said, Akamai has focused on four core elements: scale, fidelity, operations, and monetisation. Although he believes the industry has largely “checked the box” for scale and fidelity, the internet still lags television on operations and monetisation.

In terms of scale, he noted that, although Akamai’s CDN can now comfortably handle tens of millions of concurrent users, reliably streaming a massive event like the Super Bowl, which draws 100 million+ concurrent viewers, is not possible at this time.

Bishop argued that live streaming has even gone beyond television in terms of fidelity (how it looks and sounds), especially when it comes to 4K and 60p video.

As for operations, television has end-to-end visibility into nearly every stage of the supply chain for live video, while online is still maturing. “There is still work to be done on the operations side,” he said. “I think there is a gap in achieving parity there.”

According to Bishop, while the internet offers enormous potential for monetisation because of its direct addressability to the consumer, there is still a significant shortfall compared with television. “Direct addressability is possible, but that’s not the way ads are typically sold on television, which is largely about the aggregation of a large audience. But there is a lot of potential there.”

“We can evolve a [user interface] on digital platforms much quicker [than on TV],” he pointed out. “We are constantly changing Fox Sports Go and changing the UI. We are moving it away from a channel-based experience like TV and focusing on telling you when your shows are on and getting you to your shows. Content can now find the user; you can’t do that as well on television. We are looking at what NBC Sports and WatchESPN are doing, and they are looking at what we’re doing. We are pushing each other to better experiences, which are better for the user.”

Latency: The next frontier

Latency is among the largest obstacles still to be overcome, especially for live sports coverage. Pierce cited a common viewer complaint: an eruption of enthusiastic screaming by next-door neighbors watching on TV 10 seconds before the touchdown is scored on the OTT stream.

“Latency is the next frontier that I think we will [solve] shortly,” he said. “It’s a consumer-driven need. Social-media monitoring is so important on live sports. We are acutely in touch with those users, and latency is the number-one complaint by far. That is a big gap between the television experience and streaming experience. I think the tech stack will continue to get better and address that.”

Andreas Engde, project manager, Viaplay, added, “I would say, for picture quality and stability, we are roughly there, but latency is still a major point we would like to address.”

Bishop is more optimistic on solving the latency issue: “I think this year will be the year of latency, where internet latency becomes less than what cable latency is. That is where we are in the cycle of things.”

Tipping the scale: The challenge of high-profile events
The primary technical issues facing live streaming are compounded when it comes to high-profile events like the Super Bowl, drawing millions of concurrent viewers. Last February, Super LI on Fox Sports Go logged a record-setting average-minute audience of 1.72 million (up 23% from Super Bowl 50’s 1.4 million).

Although that was an event for which Fox planned for months, the lighting-in-a-bottle scenario of Game 7 of the World Series forced Fox to think faster on its feet when it attracted an average-minute audience of 343,865 viewers (a new record for an authenticated event).

The scale [of the largest live-streaming audiences] is still less than 5% of what you’re getting on TV,” noted Pierce. “So it’s hard for me to fathom a world where 330 million people turn on Fox Sports Go at the same time. We clearly aren’t there yet, but we are getting there.”

With each tent-pole event, Fox Sports Go is cultivating its in-house technology and workflows. When Fox streamed the Super Bowl for the first time in 2014, it simply inserted the same ads in both the linear-TV feed and the stream. Just three years later, Fox Sports Go implemented digital ad insertion for the live stream of Super Bowl LI.

“The big concern there isn’t handling all those concurrents; it’s their all going to break at the same time,” Pierce explained. “It’s not like VOD, where you have a million people watching but they are all at a different place in the content. This is live sports, so they are all going to make an ad request at the same time. That’s the big challenge. We took a lot of time and effort to be ready for [Super Bowl LI]. Every break creates anxiety for an event of that scale.”

Another key to reliably streaming large-scale events is redundancy. Although all the major players in live sports streaming have layers upon layers of redundancy, the ecosystems become more vulnerable when elevated to the gargantuan scale of a Super Bowl.

“As we raise the bar, one of the things that you have to talk about is redundancy,” said Engde. “You need to be redundant in so many ways that you can’t even think of them. You think you are 100% redundant but add in a couple new features and services that may not be that redundant. When even the smallest pieces break at that kind of scale, that is a huge issue.

The $$$ question: business challenges remain
Although the technology for live-streaming video is quickly catching up to linear television, the revenue for OTT remains far behind. The live-streaming industry may offer far more reliable and viewer-specific data for ads, but it lacks the established advertising business model of broadcast television, which has built its ecosystem around Nielsen ratings.

“Nielsen is the currency for television. Nielsen samples and says, You had around 2 million people. In digital, you don’t guess; you know exactly how many people watched,” said Bishop. “The problem is, how do you even count the ad [for digital]? If someone skips the ad or watches only the first five seconds, do you count that? There are a lot of business challenges in terms of how the impressions and dollars are counted. The currency that exists in pay TV is fixed: it’s the wooden nickel of Nielsen.”

Pierce concurred: “The beauty on the streaming side is, we have that data. We can say exactly how big the audience was. If an advertiser had the choice between two sporting events with the exact same audience on TV or a streaming platform, they would take the streaming because they get the data and know exactly who was watching. But the scale is just not there yet; there is still a lot to be done.”