During these times of no live sport, TV 2 Norway has been forced to think differently in providing viewers and customers with relevant content. As a result of the crisis, the broadcaster has reduced the price for its premium channels and content.

TV 2’s main sports events normally are Premier League and Champions League football on premium channels and cycling on free channels. Since lockdown, it has instead focused on viewer engagement.

On 12 March TV 2 Sport launched its new poll system, which had been tested three days before with the final Premier League match of the season, Leicester City v Aston Villa. The poll system consists of native TV 2 Sport apps for iOS and Android and template-driven sidebars on screen.

Both the apps and the sidebars have been developed in-house. The sidebars are controlled by TV 2’s Overdog custom control software and can also run via Vizrt Director.

The sidebar fetches the values automatically from the same database as the app. This allows the values to update simultaneously in the app and on-screen. 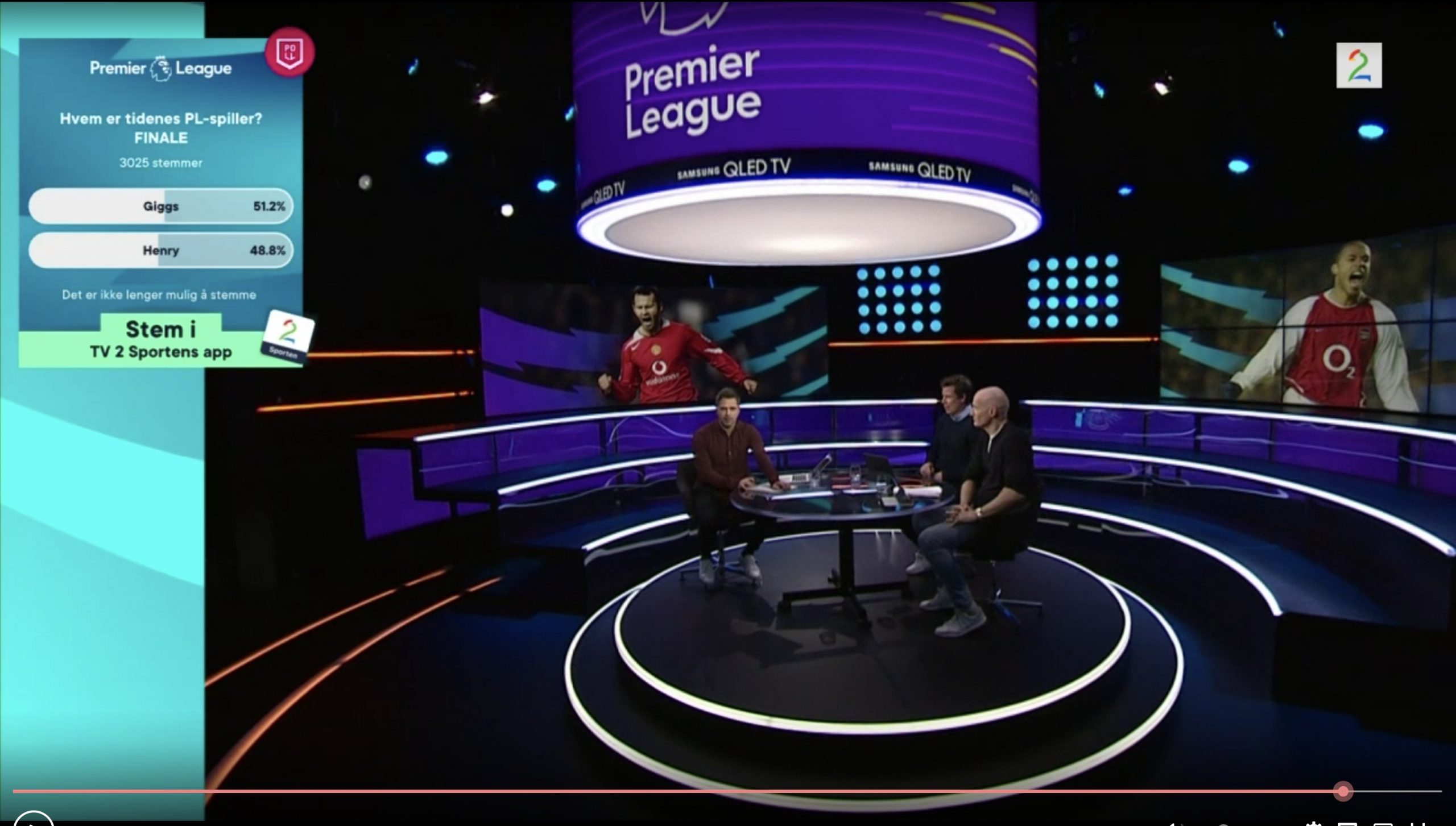 Reflecting on the introduction of the poll system and how it has unfolded through the coronavirus crisis so far, TV 2 head of graphics Harald Hovdevik told SVG Europe, “This is week four of home office. Everyone is safe and doing well. It’s innovation by brute force – that’s how we are working now! We’re trying to show our customers that we are doing our best and trying to keep them happy.

“As it happened, we were able to test the live poll system on the last Premier League match, Leicester v Aston Villa on Monday 9 March, before the lockdown. That game was the opportunity to test it, with business as usual and all personnel hands-on in the studio,” said Hovdevik.

“It creates an environment where the viewers get an impression that we really care, we want to provide them with content as best we can these days”

“Later that week we did a cycling show remotely. Going forward we said, ‘OK this can be done, we can produce shows based on this and get some viewer engagement’.

“So we were lucky that we had one test show, and from then on it has been used many times each week. The first major show was on Wednesday 18 March, when we did a poll on the all-time best Premier League goal. So just nine days after our first test we based a whole show on this poll system.

“On 18 March we had more people at our studio than we do today when doing these shows. Then, we had the producer, graphics operator and the anchors in studio, Gradually, less people are working on site. 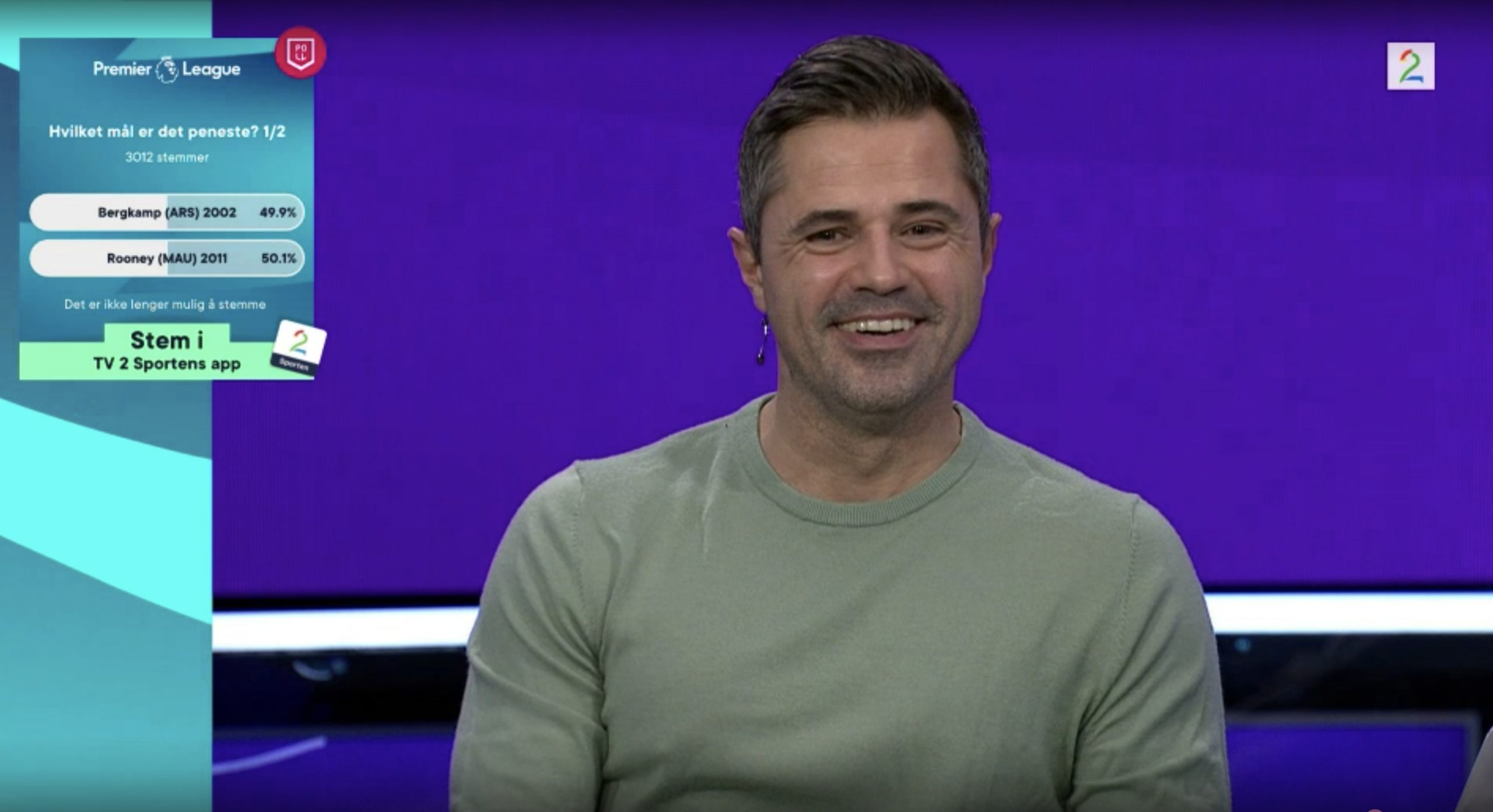 “On Thursday 2 April we did a poll on the greatest Norwegian cycling moment, which was a good example of this new remote production. The studio for the two-hour live show was a hotel lobby (as we’ve been mostly forced to move out of our Oslo office) with three anchors sitting two metres apart and only one technical operation manager controlling all cameras and audio onsite. Everything was brought back to Bergen and produced with Mosart broadcast automation with producer, GFX operator, sound engineer and EVS onsite.

“Now we’re doing two or three live Premier League shows each week, mostly with live polls during the show. And our football experts are called up on Skype so we have as few people as possible in our studios,” he said.

“We started working on the polling software about six months ago, when we saw that viewers were interested in interaction and it was hard to find polling software off the shelf that was flexible enough. We also had the TV 2 Sports app that was then basically showing football highlights and sports articles; we wanted the polling system to be an add-on to the app.

“We developed two native apps in-house for iOS and Android, and we developed also designs for apps 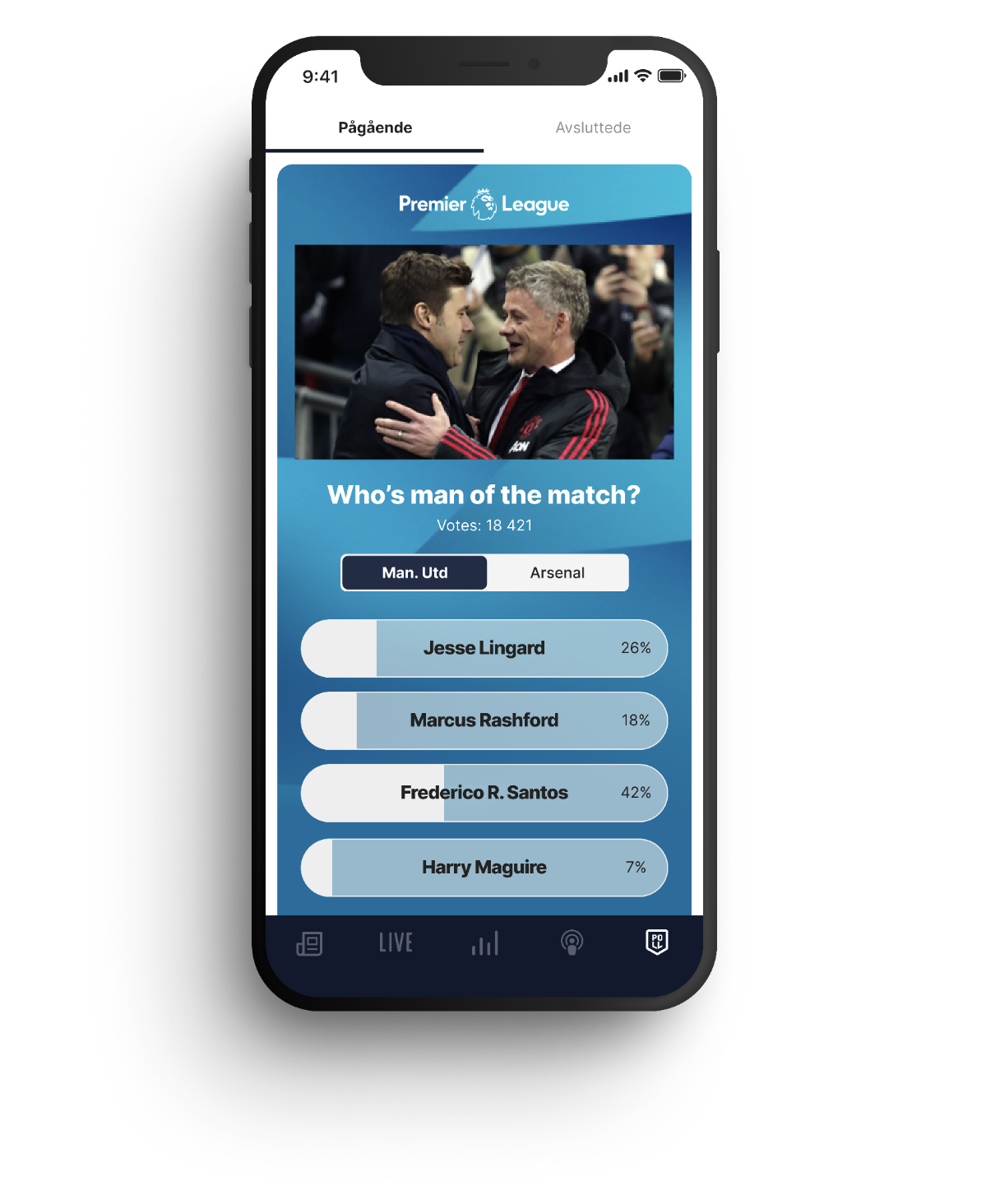 and TV with sidebars to show the live results from the poll. One of the nice things, we think, is that the poll results are always live on TV and the app at the same time so you can see when people have started voting. We’ve made a number of different designs — Premier League, Champions League, Europa League, UEFA, Tour de France and our generic TV 2 sports design – which are part of the admin tool that we also created when designing the poll system,” said Hovdevik.

“Normally the producer or graphics operator can create these polls themselves, with questions and answers. There are no backroom staff personnel needed to create them; this has been decentralised into production.

“So far this has been done without any prizes or incentives for the voters. They can’t win anything or get anything out of it apart from just participating. But our next step will be to implement a viewer log in and present sponsors and prizes. And hopefully that will increase engagement even more.

“To date we’ve used third party applications for the gathering of customer data. But we believe we can have more ownership of customer data ourselves. We are working on the whole GDPR context, making sure that data is stored correctly and we only gather the information that we need. We wouldn’t have to rely on third parties. We want to own this ourselves.

“The ratings [for these shows] are not that high … because people want to watch live football! But we get a lot of positive feedback on social media saying ‘thank you TV 2 for at least trying to give us some good content’. It creates an environment where we think the viewers get an impression that we really care, that we want to provide them with content as best we can these days.”