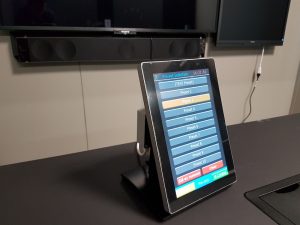 IPE has announced that TV 2, Norway’s largest commercial broadcaster, has installed IPE’s IDS production timing system as part of the construction of new broadcast and production facilities in Bergen.

The IDS system is currently being used throughout TV 2’s studios, galleries, and offscreen commentator rooms to inform people not directly involved in a production what is happening throughout the facility as certain areas and facilities are still being installed or commissioned.

IDS is being used in conjunction with TV 2’s booking system and GPIO interface units, linked to a Lawo Virtual Studio Manager (VSM). IDS-driven multilevel onscreen tallies inform staff when a studio is scheduled for rehearsal, recording, or on-air as well as the type of production. Video can be switched to the IDS displays so people around the premises can see what’s actually going on inside.

A TV 2 systems integrator, Alf-Inge Tønder, said: “As we started the early phases of the project, we were looking for something to display production room booking information, which needed to be integrated with our VSM system. We soon realised that most systems were simply not designed for broadcast applications, or required various elements to be entered manually for each display. IDS enters those details for us and automatically updates every display on the system. We have since extended the use of IDS to include control of consumer devices like set-top boxes and TVs, as well as provide automated booking, and control to and from our VSM.”

The TV 2 IDS system consists of the IDS Core, Remora 4, Remora 4+ display processors, TS4 and Walllight2. IDS SQ-IRQ control is used to monitor a range of commercial set-top boxes to ensure distribution is unaffected and, if necessary, intervene if any problems are detected.

Tønder added: “As we are building a new TV station, and we are not yet in full operation, we hope to gain additional functionality with IDS. IDS provides an easy-to-learn, easy-to-use interface, so no matter what’s going on in any given room, everyone in the facility not only has visibility of what’s happening, but can switch inputs or use certain presets to ensure the correct video input and output is being displayed according to their needs. We’re only just getting started with discovering what IDS can do, however it’s looking very promising for our needs.”

IPE head of sales and support Reuben Such said: “TV 2 is a new customer and we are delighted that they have found IDS to be so useful. As their installation is new and still evolving, I’m certain TV 2 will continue to find IDS to be an extremely flexible means to achieve their ultimate production goals.”