Unlike almost every other sport around the world, the game of chess is booming these days. World number one player, Norwegian Magnus Carlsen, hosted a $250,000 invitational tournament recently and TV 2 Norway introduced remote production innovations to broadcast the online chess tournament live to an audience above expectations. 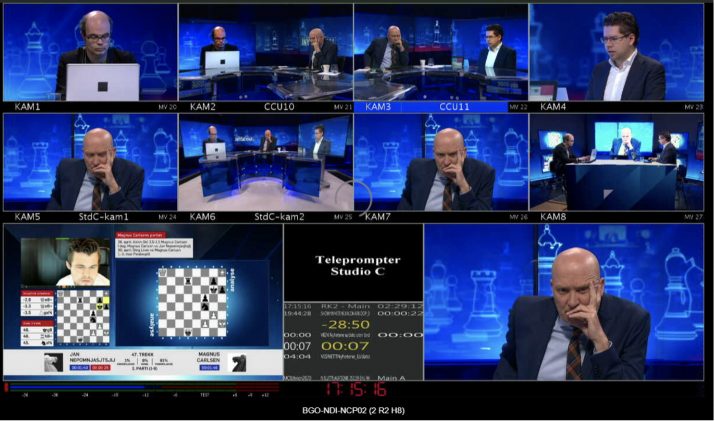 Picture of multiviewer with anchor and experts in two different locations

TV 2 purchased the Norwegian rights to the biggest online chess tournament ever held just one week before the event, broadcasting on its sports channel and also on OTT. The Magnus Carlsen Invitational was also broadcast live on LaLigaTV, normally the home of Barcelona and Real Madrid in Spain.

TV 2 has a long history of producing and broadcasting chess tournaments, but never an online tournament and never in this format. The main production challenges involved visualising the anchor and experts in two different locations, and improving the graphics for an online tournament in this brand new format.

The anchor was located in Bergen while the experts were in Oslo. When the tournament started on 18 April corona regulations restricted travel to Bergen. The preliminary matches were only broadcast every second day, so it would not have been efficient anyway for the two experts to stay in Bergen for the whole tournament.

On 29 April the corona regulations were adjusted, making it possible to fly the experts to Bergen. So for the last four days of the tournament everyone was located in Bergen.

“We have broadcast big annual chess tournaments for several years,” said Hovdevik. “When this 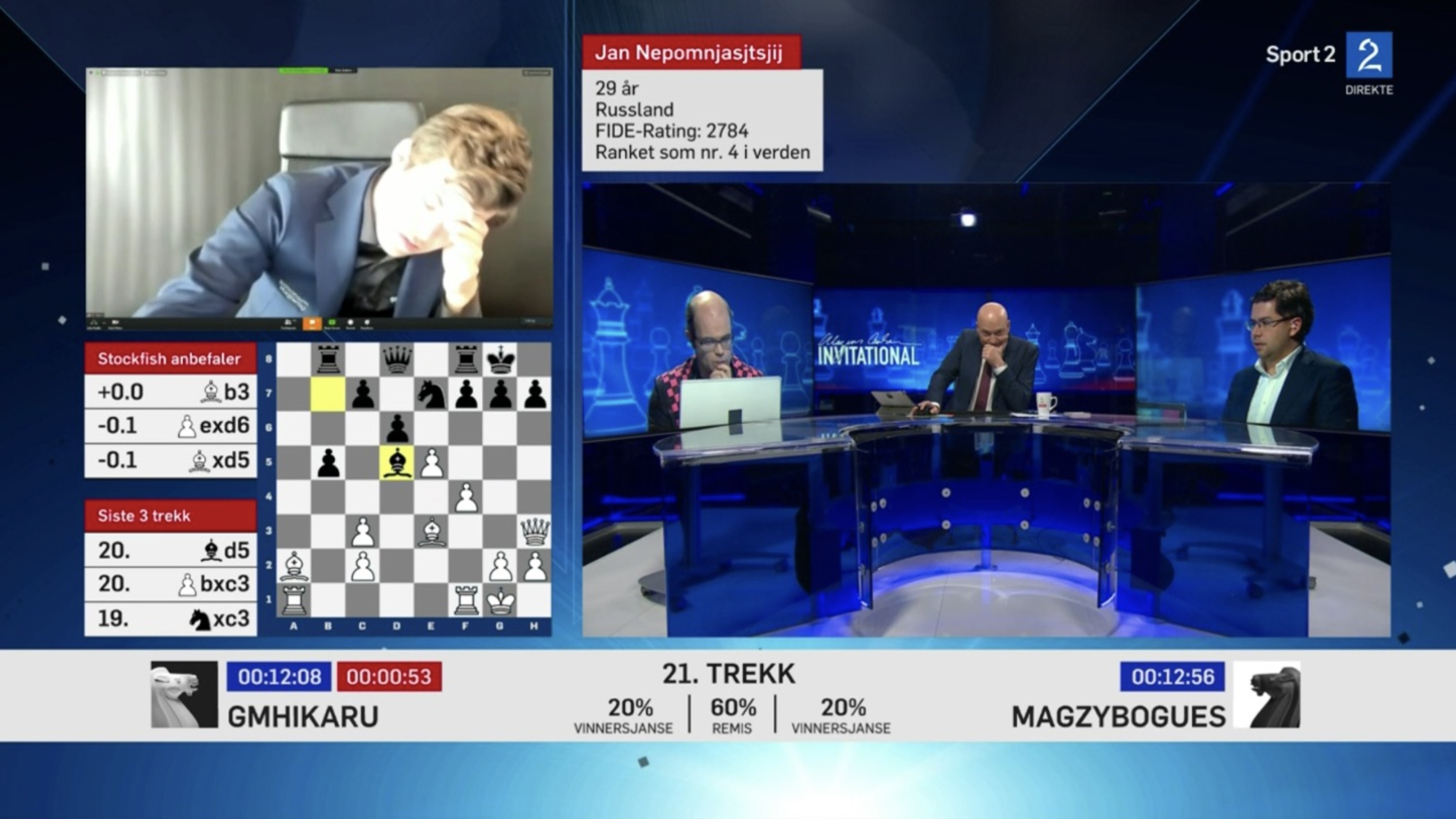 Continuous improvement of the graphics: Quad for first matches with anchor and experts in two different locations. At this stage information regarding the score and game was not visible

opportunity came up we basically had the whole setup for chess, but there were two difficulties. This was a new format, with preliminary rounds, semi finals and then the final, which meant we had to re-write some of the logic for the data feed and the graphics to make it work.

“The second challenge was that our experts live in Oslo and our anchor lives in Bergen. We could of course have used a normal setup with Skype, but we wanted to integrate the anchor and experts into the studio environment in Bergen – to simulate having them present. We worked hard to achieve that simulation of having them on-site,” said Hovdevik.

“We got the rights just one week before the tournament. Even though the format was different we just thought we had enough grounding in chess to say ‘OK let’s do this’. For the first couple of days we didn’t have the score – if you turned on the TV for the first games you couldn’t see who was in the lead.

“We just developed throughout the tournament. We fixed the scores and then we managed to get the live feed from the players’ homes at the same time for the last games,” he said. 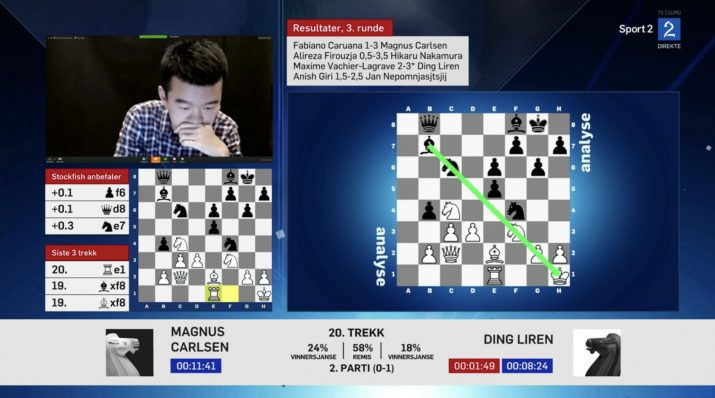 “Yes the idea was that all the close-ups should look like they were in the main studio in Bergen, even though two of them were actually in Oslo,” added Halle. “This was easy to achieve because our infrastructure is on IP and Bergen is connected; we didn’t have any latency between the two sites.

“It was more about getting the cameras in the right position. The two experts were allowed to go into our studio in Oslo as long as they kept two metres between them, and the anchor was alone in our studio in Bergen.

“We could have carried on into the semi finals and final with the two experts remaining in Oslo – but there was another production going on so we needed the studio. And anyway for the four last days of the tournament there were matches every day, so it made sense for them to come to Bergen.

“But yes we are also looking into doing other shows like this, where it is more convenient for presenters to stay where they are rather than flying between Oslo and Bergen. We wanted to do it, to see if it actually works.

“The other interesting thing was how small the production team was for this broadcast,” said Halle. “It’s just the guys you see on TV along with producer/director/editor (one person), one graphics operator and one person operating cameras and audio, all in Bergen.

“A really small team delivering everything: three people in front of the camera and three behind, 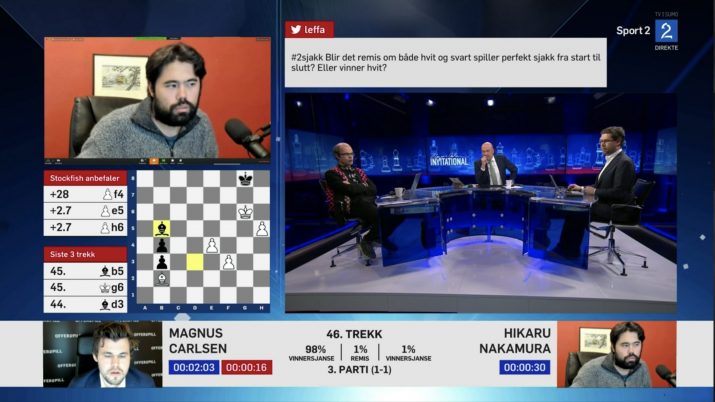 Semi-final and final including live video feed of both players

with support from our in-house technical operations managers who also serve all the other outlets we have all the time such as news and our other sports,” he said.

“There’s a new chess tournament coming up on 15 May. We don’t know the format yet! But we’ll figure it out,” said Hovdevik. “Anyway they’re changing the format of these online tournaments from one to the other. There are four more tournaments coming up after that one, all the way through to late July.

“In one way the corona regulations have sort of been a blessing in disguise, in terms of flexibility and innovation, because we just have to do be inventive. We’ve been thinking about doing things for years but it has now become, ‘OK now we must do it’. We are getting some benefits, both economically and in terms of production flexibility,” concluded Hovdevik.