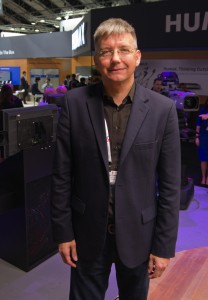 When Germany’s TV Skyline built its latest Ultra HD truck, OB8, last year it didn’t buy any cameras. “I’ve not been satisfied with the options in the market,” said Wolfgang Reeh, its owner and CEO. Instead, OB8 has been running with HD cameras. Now it has bought 21 cameras from Grass Valley, including 12 of the new LDX 86N UHD cameras, with HDR and 3x Universe options for high-speed HD applications.

Reeh selected the 86N after conducting a shoot-out against other UHD cameras, with two days of testing. “We did a lot of tests under different light conditions, comparing resolutions, sensitivity, signal-to-noise ratio. The features of the camera were also important,” he said. He particularly liked the 86N because “I think it is the most modern system camera in the market, and it has a lot of potential.”

OB8 did its first UHD match at the beginning of September, as part of a dual HD and UHD production, using the 12 system cameras and two specialist 4K cameras, as well as various HD cameras. The truck, which was designed and integrated in house and went into use in September 2015, is based around a SAM Kahuna 9600 switcher with Maverik 2 control panel, which can upconvert any HD signals in the switcher, and handle both HD and UHD as separate signal paths. OB8 can handle more than 30 camera chains.

The 86N compliments the 108-input Kahuna in that it can not only do UHD but also native HD output at the same time, going to separate M/Es on the switcher. “The LDX 86N offers all the features that a modern system camera should,” he added.

He believes that its ability to do Tico compression in the camera head will prove useful, although TV Skyline is not using it yet as not enough equipment supports Tico I/O — but it would provide an alternative to doing one-cable UHD to 12G-SDI, which he is wary of because of cable length issues.

As well as the LDX 86Ns, TV Skyline has also bought seven LDX C80 Compact Première cameras for remote and robotic applications; and two LDX 80 Première cameras for HD wireless use. “It does not make sense to go UHD for wireless at the moment, because we do not have a good 4K wireless solution,” said Reeh.

Instead it is using 3G-SDI cameras and upconverting, which Reeh believes can look OK, although that depends on the weather and lighting conditions, focal length and many other variables. Each scenario has to be tested on the day. “We always look at image quality in advance, to see if it will work.”

The seven LDX C80 cameras have already been used for several projects, including the Rio Canoeing and Rowing competitions in Lagoa where they were installed on OB boats and remotely controlled. Before this the cameras were used during the Wagner Festspiele in Bayreuth in Bavaria [see separate story this week by David Davies], where they were mounted on robotic heads in the Shell, the area where the orchestra sits and no camera operators are allowed.

High dynamic range is becoming an important consideration for UHD, and “is something we will have to deal with in the near future. I already have requests from customers,” says Reeh. Early next year TV Skyline will start covering UEFA Champions League football in HDR UHD and will also be outputting HD 1080i in standard dynamic range, from the same truck. “It is pretty complex, but we’ve already done it without HDR with no problem. However, adding the HDR makes it much more difficult,” he said.