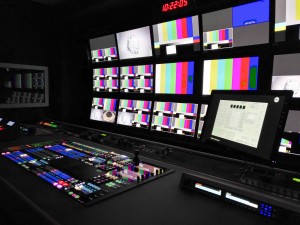 Hong Kong’s largest broadcaster, Television Broadcasts Ltd. (TVB), has invested in the flagship Kahuna multi-format live production switcher and IQ Modular infrastructure for its first UHD outside broadcast vehicle. The unit replaces an old SD truck and will be used to support a mix of HD and UHD broadcasts, in particular the coverage of international events.

SAM’s Kahuna switcher and IQ Modular infrastructure allows TVB to support even the most complex production – be it HD or UHD. The switcher can handle any combination of SD, HD, 1080p, 4K, IP and HDR thanks to SAM’s FormatFusion3 and recently introduced FormatFusion4 technology, eliminating the need for external conversion, saving time with setup.

TVB began the planning and design phase for its new UHD truck in 2013 to meet the future demand for UHD/4K production. It was critical that any UHD productions were made to the same high standard as its HD content offering; the new truck had to deliver the same reliability and robustness as its existing HD OB vehicles.

The biggest challenge was the lack of all the necessary UHD equipment available on the market at the time. TVB decided to build the truck first then re-evaluate the available UHD products at a later stage. In 2016, following a call for proposals, TVB selected SAM’s Kahuna 9600 UHD/4K production switcher, SAM’s IQ Modular infrastructure alongside UHD 4K HDR cameras from Ikegami and lenses from Fujinon. All the systems were delivered by late 2016 with the truck going live in April 2017.

Mr.B.L Cheung, Supervising Engineer at TVB commented, “We chose SAM not only for the power and functionality of the products, but for their dedication in working closely with us to deliver solutions that best fit our requirements. The SAM team also demonstrated impressive skills, technical know-how and unbeatable pre- and post -sales support, which was critical in such a tight turnaround project.”