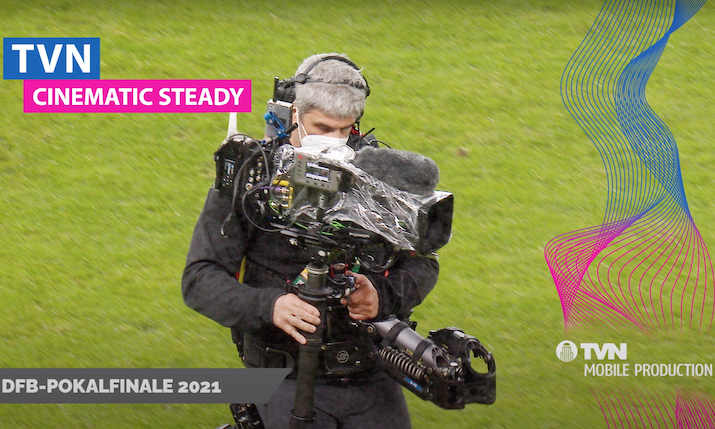 TVN Mobile Production produced the TV world signal of last month’s DFB Cup Final 2021 from the Berlin Olympic Stadium. More than 10 million viewers watched Borussia Dortmund’s 4-1 victory over RB Leipzig on ARD and Sky. With an audience share of around 30% on ARD, it is the most successful sports programme of the year in Germany so far.

“We were on site for the DFB with our TVN-Ü6 and TVN-Ü5 OB vans to broadcast the final in UHD-HDR,” said Bastian Berlin, head of sales at TVN Mobile Production. “Our signal was distributed live to around 200 countries and could be seen in Germany on the public ARD programme Das Erste and on Sky.”

On Das Erste alone, the programme was watched by 9.54 million people.

As a technical premiere, a TVN Cinematic Steadycam with an Arri Alexa Mini camera was used on the sidelines for the first time.

“Thanks to the stronger depth of field and the special look of the Cinematic Steadycam shots, we were able to capture the dramaturgy of the final very beautifully – we would like to offer such options to directors again and again,” Berlin added.

The company also utilised its TVN Live-Copter to provide impressive panoramic images of the coloured architectural lighting of the Olympic Stadium from the air.