Since rolling out this summer, Euro Media Group’s (EMG) new twin Nova 103 and Nova 104 UHD HDR trucks have been busy covering Ligue 1 football and Top 14 rugby for Canal+ in France. In late September Nova 103 crossed the French border for the first time to provide host broadcast coverage for the UEFA Super Cup between Bayern Munich and Sevilla in Budapest.

At 16.5 metres in length 103 and 104 are built for large, high-end sports production and were originally commissioned as host broadcasting trucks for the Euro 2020 tournament, which is now scheduled to take place from 11 June to 11 July 2021. As such, they are part of a series of newly built UHD trucks that were expressly commissioned to be in place for the multi-city UEFA Euro 2020 tournament this summer. 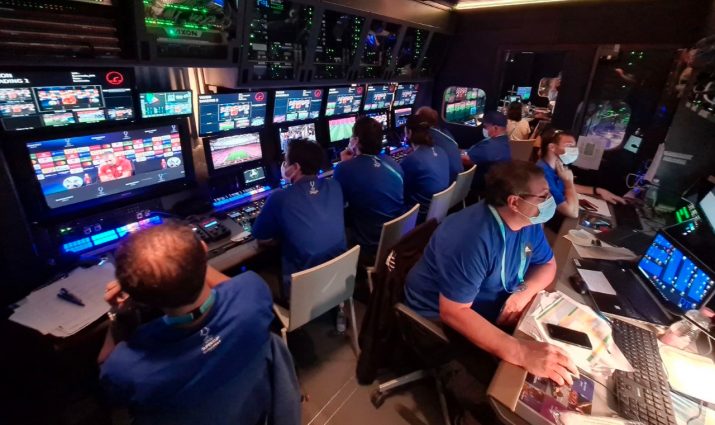 HD Broadcast’s new UHD 2 truck was originally green-lit in September 2019 with a view to being on the road earlier this year in time to cover Euro 2020 matches in Dublin. Meanwhile, Timeline Television’s double-expanding UHD3 was commissioned for the BBC’s presentation coverage of Euro 2020.

Given the timeframe involved, Euromedia France CTO Gaël Tanguy told SVG Europe a decision was made to install SMPTE 2110 IP for audio and intercoms in 103 and 104 – but not to commit fully to IP-based production for these UHD trucks.

“For video the equipment is SDI,” said Tanguy. “The original timeframe was tight being a few months [before COVID-19 postponed the 2020 Euros] and for the technical team it was a challenge to build these trucks.

“It was another big challenge to be able to produce with full IP trucks. So this decision was made really due to the security of that time frame.

“In the Euro Media Group we now have a very big IP workflow for audio and video called diPloy. But for these trucks the challenge was for the delivery of the UEFA Euro,” said Tanguy.

Last month Euro Media Group took the wraps off diPloy, a modular standardised IP platform that is the culmination of a three-year technology project initially titled OBjective 2020. diPloy is EMG’s approach to building an IP infrastructure for fixed facilities, OB trucks or fly-aways from preconfigured modules. 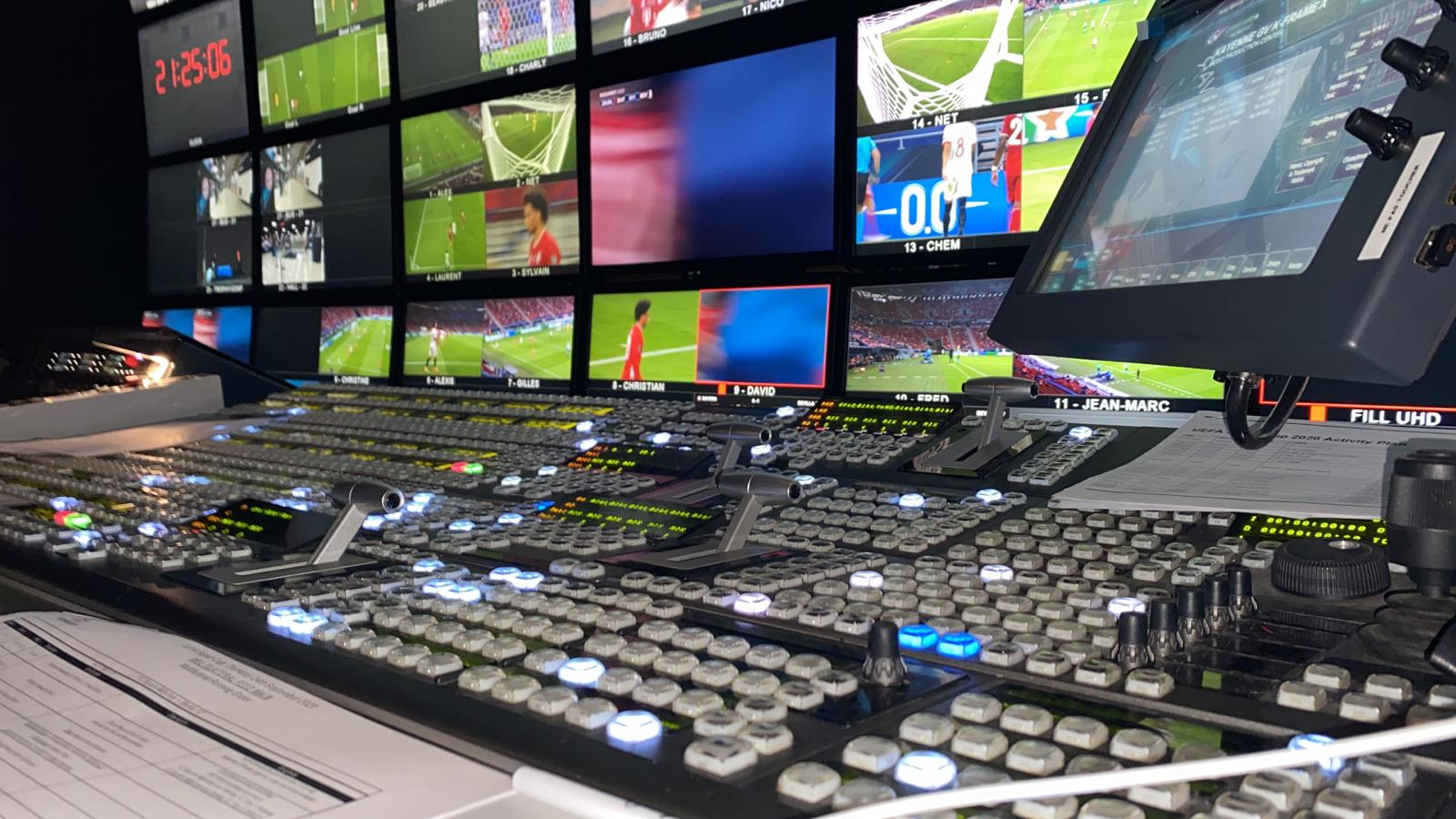 EMG company CTV Outside Broadcasts recently launched the latest addition to its fleet, OB12A, which hit the road at the Irish Open 2020 in late September for European Tour Productions. The truck is fully IP from end to end using the diPloy platform. OB12A also has a little sister on the way, OB12B, which is also being fitted with diPloy and will work alongside OB12A when it is launched later this year.

Tanguy told SVG Europe that a new truck in the works – one of several currently being built in Hilversum — is also equipped with the new diPloy concept.

“OB12A was released very recently and there will be an OB12B – both will be full diPloy inside. 103 and 104 were tailor-made for super premium events in mind, but the vision of the group is also to be modular and scalable with diPloy as the future,” he said.

“The design is exactly the same for both trucks: they really are twins,” said Tanguy. “We decided from the beginning to make them twins, in order to multiply the capacity and facility to deliver major productions.

“We wanted more facilities for the client and more flexibility for the OB schedule. The trucks are very, very powerful. It’s easy for us and for the clients to have two identical trucks, where we’re able to go for one or both in the space of a few days for smaller or bigger productions.

“We have two dedicated crews, one for each truck, that can operate these types of premium productions. This is quite important for COVID, because if for example someone tests positive we can easily replace that person.

“It’s important these days to be able to face any eventuality due to COVID, and of course it means there is more availability for the client.

“We do need more time for deployment these days,” he observed, “but it doesn’t change the technical requirements. We have been working on projects with both trucks for the past three months, and they are a good solution during COVID as there is a lot of space for Canal+, for example. There is a lot of flexibility in all of the production workstations and it’s very easy to deploy all the guys in the trucks with COVID security.”

Technical design for the trucks was by Euromedia France and full design and build was undertaken by Project Builders, an EMG division based at Videohouse in Belgium.

“Audio and intercom are full SMPTE 2110 IP,” said Tanguy. “There is a big EVS Cerebrum controller in each truck: this provides very important supervision and management of all equipment inside and outside the truck.

“We have the latest Grass Valley Kayenne K-Frame vision mixers, Lawo MC56 audio console and Riedel Artist and Bolero IP and RF intercoms. Video routing is GV Sirius 840, and the glue is by Axon. We have Sony HDC 3500 and 4300 UHD cameras, Canon lenses, Sony HDC 4800 and DVS Superloupe high-speed cameras, and a mix of Craltech, Penta, Sony and Vutrix displays and multiviewers.

“There is an HDR workflow and a dedicated HDR supervision in the trucks, with Sony BVM-HX310. UEFA congratulated us on the amazing quality of the pictures during the Super Cup in Belgrade – we were very happy.

“These won’t be the last OB trucks we build, but for the next trucks we need to combine the concepts of OB truck and full IP fly-pack”

“We also wanted the ability to produce in Dolby Atmos. For the Euros, Atmos would have been produced at the IBC [in Amsterdam] but we felt it was not possible to build these kinds of OBs without being able to produce Atmos audio in the truck,” he said.

The trucks carry EVS XT3 and XT VIA servers on board, along with SimplyLive Vibox 8 & 16 and Sony PWS 4500. Wireless cameras are a mix of HD and UHD LiveTools systems. 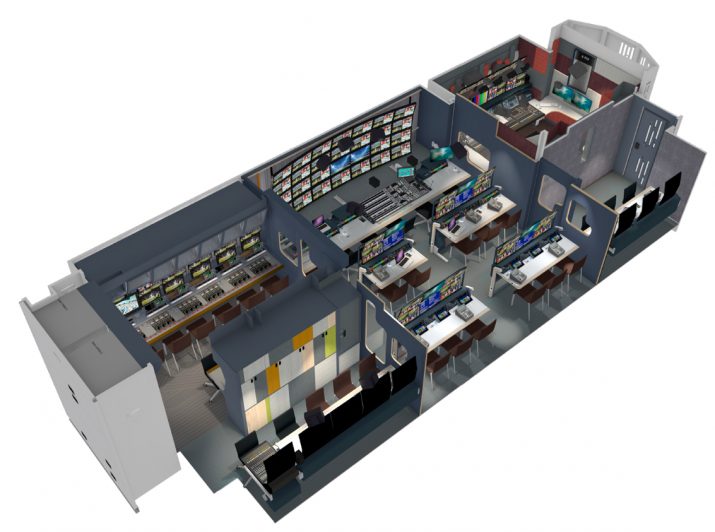 Given the move to modular and remotely integrated live production, and of course the environmental sustainability concerns that need to be taken into account these days in relation to OBs, is it likely that Nova 103 and 104 will be in the the final generation of super-sized trucks to be built by Euro Media Group?

“These won’t be the last OB trucks we build, but for the next trucks we need to combine the concepts of OB truck and full IP fly-pack. We need to be able to use our diPloy workflow in our OB trucks, with diPloy modules — and if we need to have a big production for a few weeks we will be able to extract all the diPloy modules of the OB truck to a fly-pack. This is the new vision of the Euro Media Group,” said Tanguy.

A 360° virtual tour of the trucks is available here.